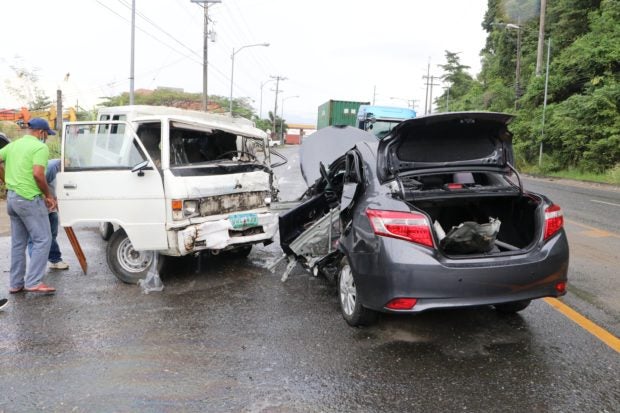 The collision between this gray Toyota Vios and white Mitsubishi L300 van claimed the lives of the vehicles’ drivers. Two passengers of the car also suffered serious injuries during the accident inside the Subic Bay Freeport on Thursday. (Photo courtesy of the Subic Bay Metropolitan Authority)

Killed were Apollo Perez, driver of a gray Toyota Vios, and Reynaldo Yumul, driver of a white Mitsubishi L300 van.

Investigators said the car was traveling north from the Cubi area going to the Central Business District Area when it swerved to the opposite lane before crashing into the approaching van.

It was not immediately known why the car moved to the other lane along the Argonaut Highway inside this freeport around 8 a.m.

The victims were rushed to a hospital, but Perez was declared dead on arrival, while Yumul died while being treated.