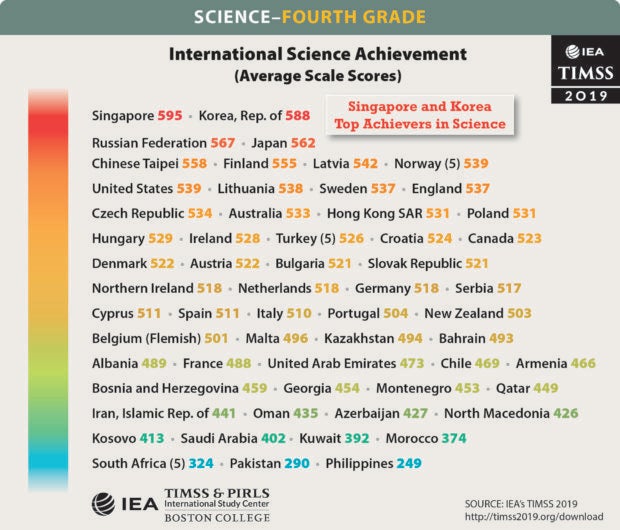 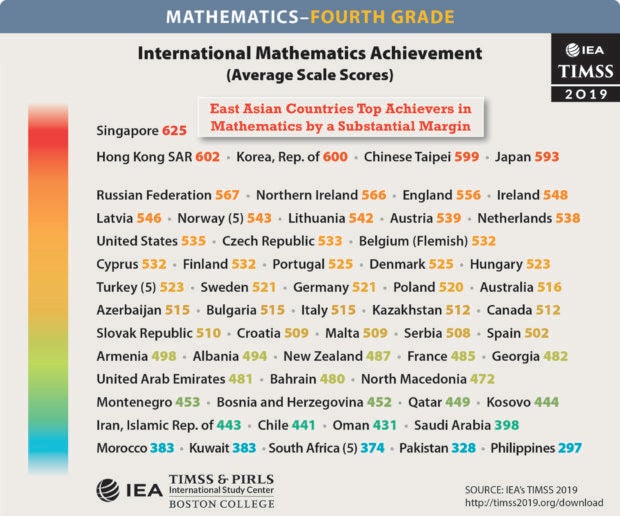 MANILA, Philippines — Filipino students ranked lowest among 58 countries in an international assessment for mathematics and science for Grade 4 students, the Trends in International Mathematics and Science Study 2019 (TIMSS) uncovered.

In a study conducted from March until June last year but was released only on Tuesday, the Philippines scored 297 in mathematics and 249 in science. These scores, compared to other participating countries, are “significantly lower” according to TIMMS.

Singapore, on the other hand, topped the assessments with a score of 635 in mathematics and 595 in science.

It measures the competence in math and science of grade 4 and grade 8 students from participating countries around the globe.

The Philippines only participated in the assessment of fourth-grade students for the 2019 study.

In mathematics, only 19 percent of Filipino students reached the low intermediate benchmark, which indicated that only a few percent “have some basic mathematical knowledge.”

“They can add, subtract, multiply, and divide one- and two-digit whole numbers. They can solve simple word problems,” the study explained.

“They have some knowledge of simple fractions and common geometric shapes. Students can read and complete simple bar graphs and tables,” it added.

Meanwhile, under the international benchmark, only six percent of Filipino students “can apply basic mathematical knowledge in simple situations.”

Only one percent reached the high benchmark, meaning, “students can apply conceptual understanding to solve problems.”

In science, 13 percent of Filipino students were included in the low benchmark. Based on TIMMS, these students “show limited understanding of scientific concepts and limited knowledge of foundational science facts.”

Five percent are in the intermediate benchmark while only one percent reached the high benchmark.

Senator Sherwin Gatchalian on Thursday brought up the TIMMS results before the hearing of the Senate committee on basic education. Gatchalian described the results of the study as a big problem in the country.

“I call this a major crisis in the education of the country,” he said.

“We have to address this crisis and we cannot just sleep quietly and comfortably knowing that our students are performing very poorly and continue to perform poorly in a lot of the examination,” he added.

In a separate 2019 study by the Southeast Asian Ministers of Education Association (SEAMEO) and the United Nations Children’s Fund (UNICEF), only a small percentage of grade 5 Filipino children excelled in mathematics, reading and writing.

In 2019, Programme for International Student Assessment (Pisa) by the Organization for Economic Cooperation and Development (OECD) found that Filipinos fared worst among 79 countries in reading literacy and second-lowest in both mathematical and scientific literacy.