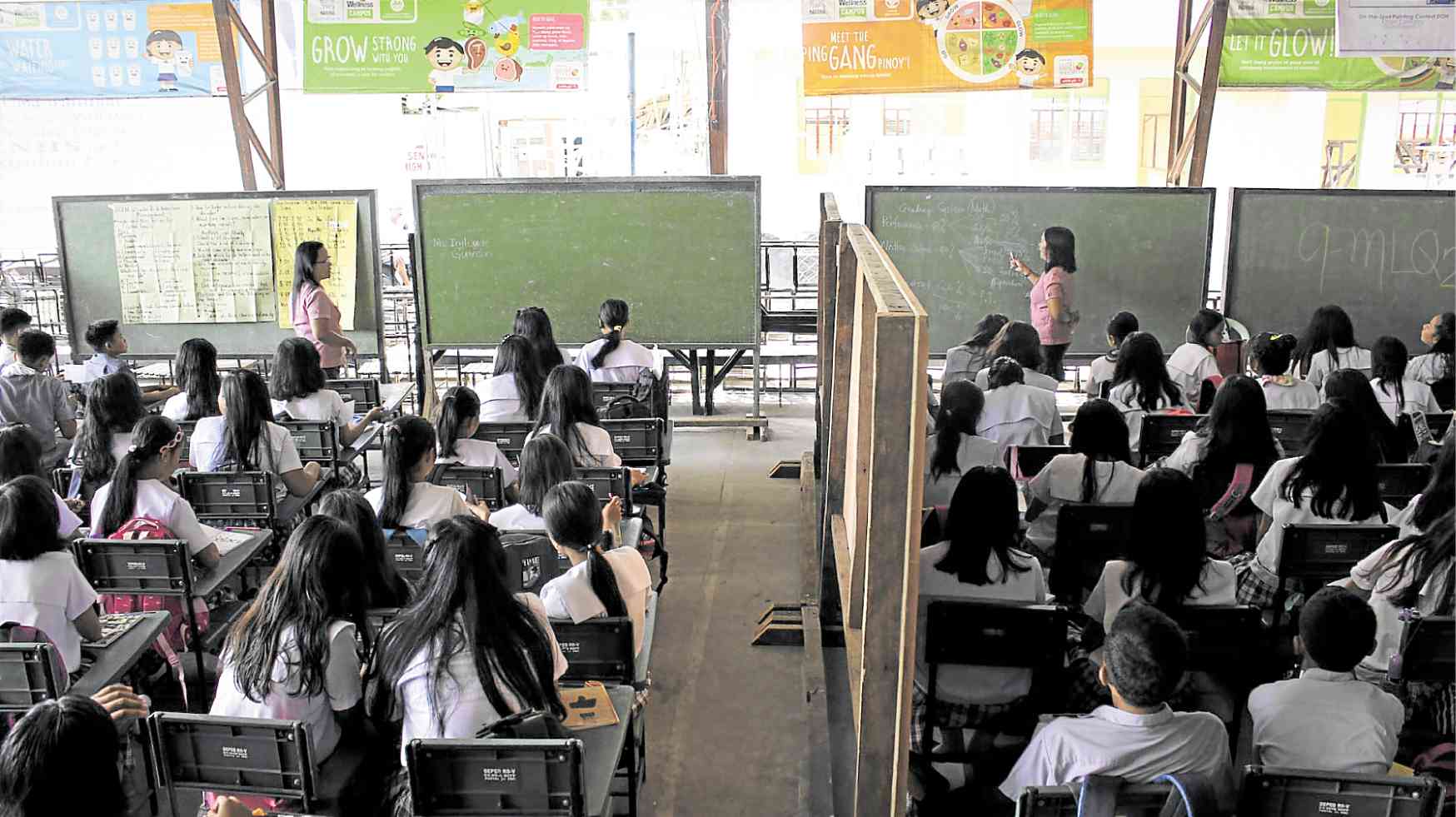 POOR IN READING, MATH, SCIENCE Filipino 15-year-olds fared the worst in reading and landed second to the last in math and science among students from 79 countries in a global assessment of educational achievement, prompting Education Secretary Leonor Briones to order a review of the country’s basic education and the effectivity of English asmedium of instruction. —MICHAEL B. JAUCIAN

MANILA, Philippines — Education Secretary Leonor Briones on Wednesday ordered a review of the country’s basic education curriculum, especially whether English was being taught effectively, after the Philippines showed a dismal performance in reading, math and science in an assessment by an international agency.

According to results of the Programme for International Student Assessment (Pisa) by the Organization for Economic Cooperation and Development (OECD) released on Tuesday, Filipinos fared worst among 79 countries in reading literacy and second lowest in both mathematical and scientific literacy.

The Philippines joined what was essentially an educational achievement test through Pisa for the first time in 2018. The assessment is administered to 600,000 15-year-old students from participating countries in a two-hour computer-based test. It is conducted in the countries’ medium of instruction which, for the Philippines, is English.

“It (English) is clearly a weakness of our learners and could possibly have an effect on [their] performance,” said Briones. “Therefore, I direct the Curriculum and Instruction [Office] … to look into this proficiency in English, particularly in science and mathematics.”

In a statement, the Department of Education (DepEd) conceded that the results showed the “urgency of addressing issues and gaps in attaining quality of basic education in the Philippines.”

“By participating in Pisa, we will be able to establish our baseline in relation to global standards, and benchmark the effectiveness of our reforms moving forward,” it said. “The Pisa results, along with our own assessments and studies, will aid in policy formulation, planning and programming.”

Speaking before a gathering of teachers, school administrators, education officials and representatives of private education groups, Briones said the Pisa results would “be very useful to us.”

Going by Pisa standards, the results showed a dire situation for basic education in the Philippines.

The country was rock bottom in reading, scoring an average of 340 points — drastically lower than the global average of 487. Four of five Filipino students were categorized as Level 2, or “low performers,” in the subject.

According to the OECD, Level 2 students possess a proficiency that is “too low to enable them to participate effectively and productively in everyday life.”

The Philippines had “one of the largest shares of low performers among all Pisa-participating countries” in reading, it said.

The country’s average score in math was 353 compared to the global average of 489, and was the second lowest score in the subject. The score was at par with Panama and only higher than the Dominican Republic.

In science, the Philippines’ showing was equally bleak, posting an average score of 357, much lower than the global average of 489 and the second lowest, again on par with Panama and outperforming just the Dominican Republic.

Chinese students topped the assessment with a score of 555 in reading, 591 in math, and 590 in science.

Of the nine other partners of the Philippines in the Association of Southeast Asian Nations (Asean), Singapore scored the highest, placing second place with 549 points in reading, 569 in math, and 551 in science. Indonesia ranked 74, just a few rungs above the Philippines.

The DepEd recently pivoted its policy focus from raising enrollment numbers to improving the quality of education with its nationwide “Sulong Edukalidad” campaign.

The move will push “aggressive reforms” in four main areas:

Briones said she had also directed the Bureau of Education Assessment to “be more proactive in interacting with our units in the field,” especially the DepEd’s 900,000 teachers.

She appealed for support from legislators in creating a “more meaningful” National Education Academy in order to better train teachers, who could be “barriers to effective learning” if they were left lacking in skills.

The influential private group Philippine Business for Education (PBEd) lauded the country for participating in the global assessment, which began in 2000.

“As the largest international comparative assessment of education in the world, our low ranking of 79th out of 79 high and middle income countries … is an opportunity for all sectors to come together to take a hard look at the quality of Philippine education,” PBEd said in a statement.

It said education advocates from the private sector, civil society and  academia should now collaborate to use the Pisa data to develop strategies and innovative solutions.

PBed cited Peru as a template for the country, as the South American nation similarly scored poorly in its first showing but used the results “to rally everyone around a shared goal to improve its educational system.”

“We caution against the Pisa results becoming a cause for finger-pointing, blaming and shaming,” it added.

The OECD, composed mostly of advanced Western nations, said it was important to understand the situation of certain countries that might be reflected in its poor performance in the assessment.

In its report on the 2018 Pisa, it noted that government spending per student was lowest in the Philippines among all participating countries. The Philippines, it said, spent 90 percent lower than what was the average OECD expenditure for education.

It also noted that 94 percent of 15-year-old Filipino students spoke a language other than English at home, which was the highest proportion among all the countries that were assessed except for Lebanon.

Another alarming finding from the assessment was that 65 percent of Filipino participants reported being bullied at least a few times a month, compared to an average of just 23 percent across OECD countries.

It reported that private school students in the country significantly outperformed public school students across all three categories: reading (390 vs 328), mathematics (395 vs 343) and science (399 vs 347).

It also noted that the number of Philippine respondents was smaller than most other participating countries, which it said could be due to many 15-year-olds having dropped out of school.