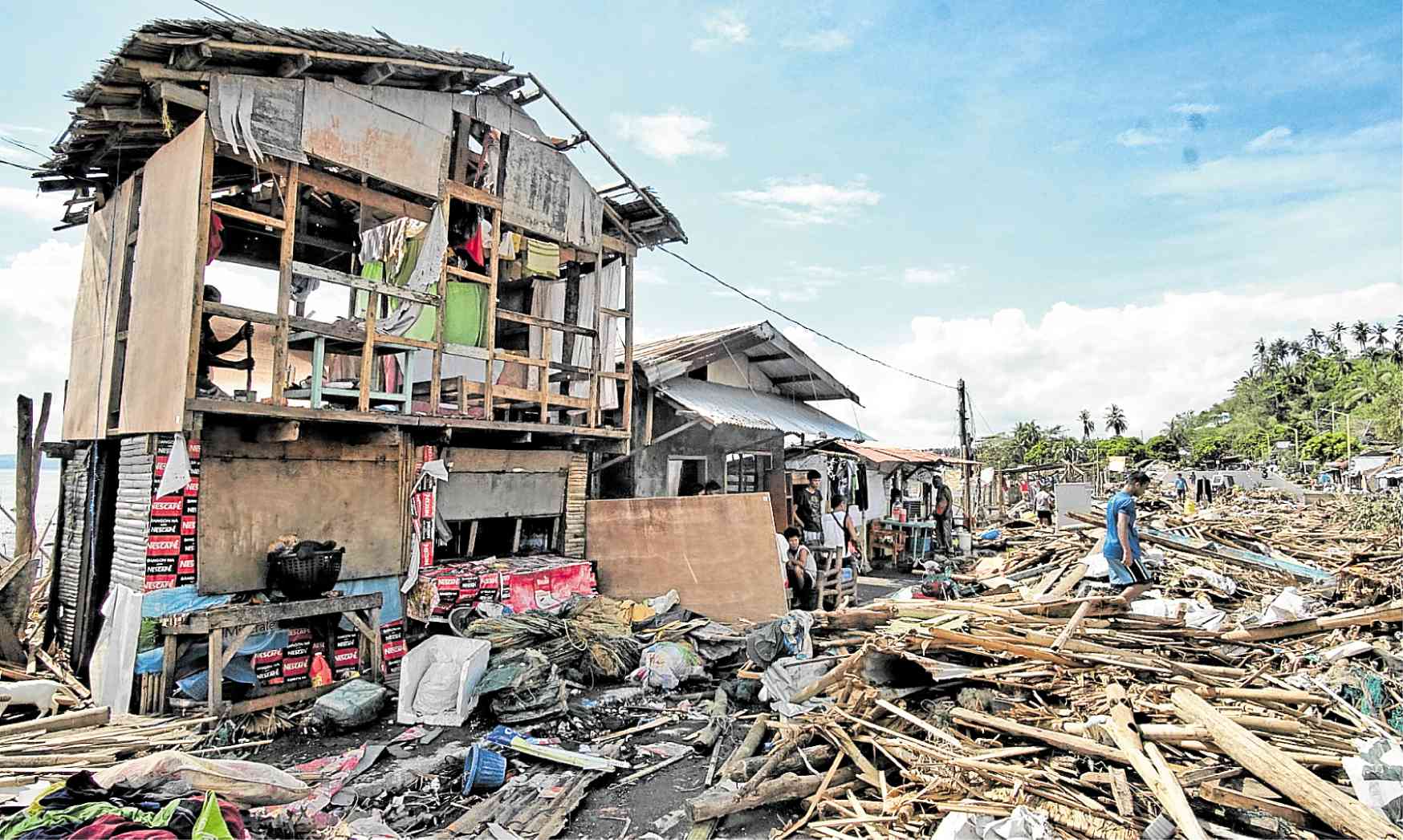 ANY SHELTER WILL DO AT CHRISTMAS Residents of Bulabog village in Sorsogon City on Wednesday sift through debris from their houses that have been destroyed by Typhoon “‘Tisoy.” With only 21 days till Christmas, they must be able to at least partially rebuild their houses or patch together any kind of shelter so as not to spend the holidays in the open. PHOTOS BY MARK ALVIC ESPLANA

At least 17 people died as a powerful typhoon battered regions south of Luzon on Monday and Tuesday.

Five of them perished as Typhoon “Tisoy” (international name: Kammuri) slammed into the Bicol region late Monday and early Tuesday, four were killed in Calabarzon, and seven in Mimaropa as the storm blew across the country’s center later in the day.

In Isabela province, police reported that a 15-year-old high school student drowned after being swept away by huge waves while he and five friends were swimming in Divilacan Bay at the height of the storm.

Not all deaths confirmed

Disaster management officials, however, would not yet confirm some of the deaths as of Wednesday, as they were still verifying the information.

Tisoy, the 20th typhoon to hit the Philippines this year, hit land in Sorsogon province late Monday and made two more landfalls on Burias Island and in Masbate as it churned westward on Tuesday, prompting more evacuations after local governments in five regions had taken more than 225,000 to shelters.

School and work in government offices were called off and hundreds of domestic and international flights were canceled as Tisoy cut through central Philippines.

It also disrupted the schedule for some events in the 30th Southeast Asia Games, which the Philippines is hosting until Dec. 11.

Around 345,000 people were still in evacuation centers on Wednesday, awaiting authorities’ clearance for them to return home, Mark Timbal, spokesperson for the National Disaster Risk Reduction and Management Council, said in a television interview.

Airlines operating at Ninoy Aquino International Airport in Manila canceled 40 flights, including 11 international services, on Wednesday due to bad weather. Airport management began efforts to bring operations to normal after a seven-hour closure as Tisoy pummeled southern Luzon on Tuesday.

Vice President Leni Robredo on Wednesday appealed to the public to help people who had been displaced by the storm.

Speaking to reporters on the sidelines of an event in Quezon City, Robredo said among the relief items most needed by the survivors, mostly in Bicol and Eastern Visayas, were drinking water and housing materials, as many houses and buildings were damaged by the typhoon’s powerful winds.

The Vice President, who hails from Naga City in Camarines Sur province, said she would visit the typhoon-hit areas in Bicol during the weekend. She said she would bring relief goods and other things needed by the survivors.

The weather bureau said on Wednesday that improved weather could be expected as Tisoy blew out of Philippine territory.

As of 5 p.m. on Wednesday, Tisoy had further weakened into a severe tropical storm, affecting no part of the country as it moved over the West Philippine Sea, according to the Philippine Atmospheric, Geophysical and Astronomical Services Administration (Pagasa).

Tisoy’s center was 380 kilometers west of Subic, Zambales province, as of 3 p.m. and had maximum sustained winds of up to 95 kph and gusts of up to 115 kph.

The storm was moving west-northwest at 20 kph and it was expected to exit Philippine territory between Wednesday night and Thursday morning.

But Pagasa weather specialist Raymond Ordinario advised residents of Cagayan Valley, Cordillera Administrative Region and Central Luzon to be ready for scattered rain on Thursday that would be brought by the northeast monsoon.

Six villages in Sorsogon were unreachable by vehicle because of landslides in the towns of Irosin, Juban, Bulan and Matnog. 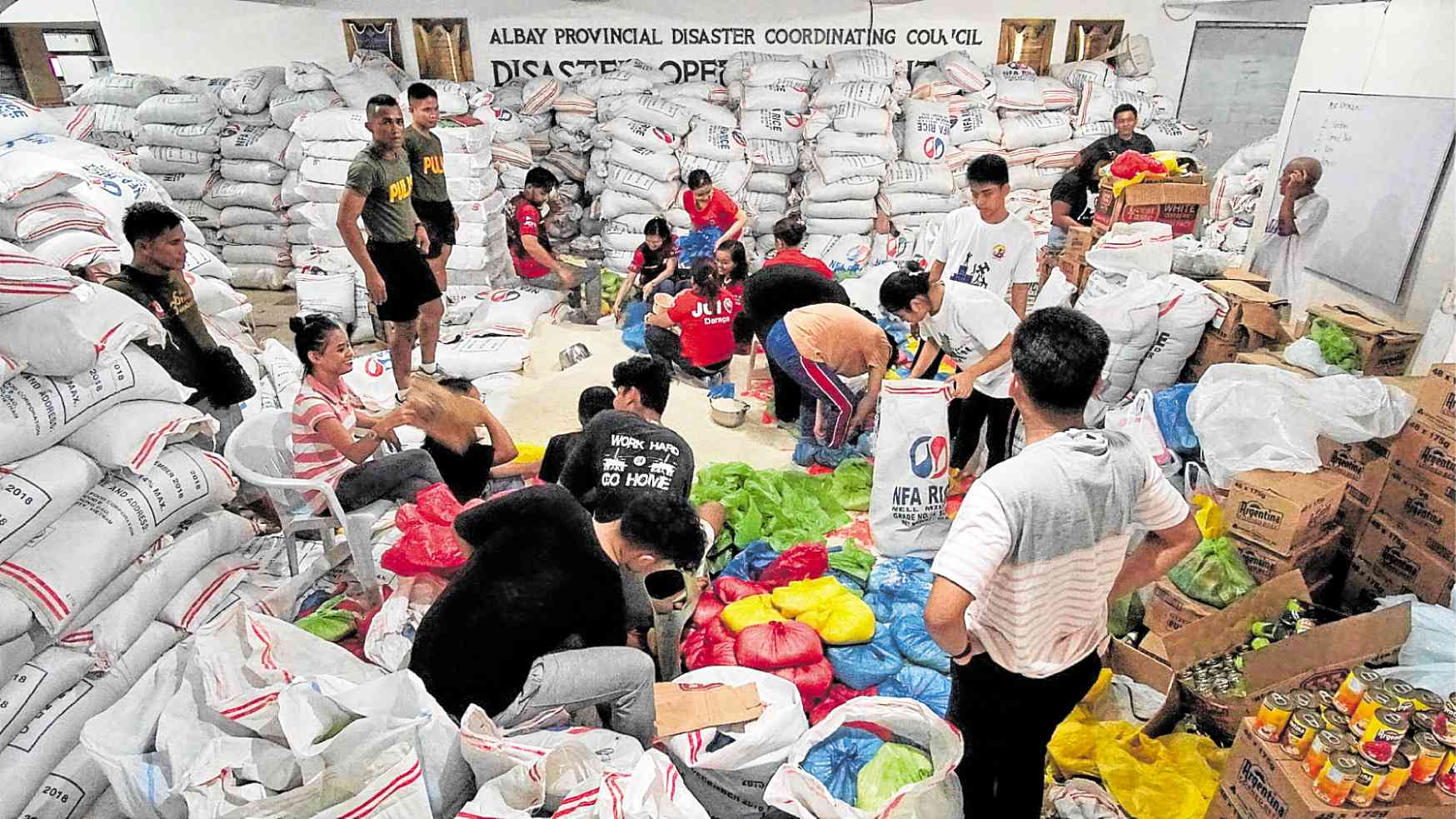 FOR THE COLD AND HUNGRY Social workers and volunteers pack relief goods at the Public Safety and Emergency Management Office in Albay province on Wednesday for distribution to hundreds of people jamming the shelters after fleeing Typhoon “Tisoy” on Monday and Tuesday.

Albay, Sorsogon and Naga City have all declared a state of calamity.

School returns next Monday in Albay after Gov. Al Francis Bichara extended the closures to the end of the week.

The entire Bicol still had no electricity, with local power companies unable to say on Wednesday when they could restore power in the region.

The Department of Public Works and Highways reported on Wednesday that all major roads in the Bicol provinces had been cleared of storm debris.

Aviation authorities said Legazpi City airport, which was damaged at the height of the storm, would resume operations on Thursday.

In Calabarzon, officials were inspecting farms, schools and infrastructure on Wednesday to estimate the damage caused by Tisoy.

More than 60,000 people were still the shelters in 455 villages in six cities and 36 towns in the region.

In Mimaropa, sea travel to and from the two Mindoro provinces resumed on Wednesday.

The town of Pinamalayan in Oriental Mindoro was the first to report damage to crop and fish farms—P156 million.

More than 30,000 people fled their homes and took shelter in evacuation centers as Tisoy blew over Mindoro Island.