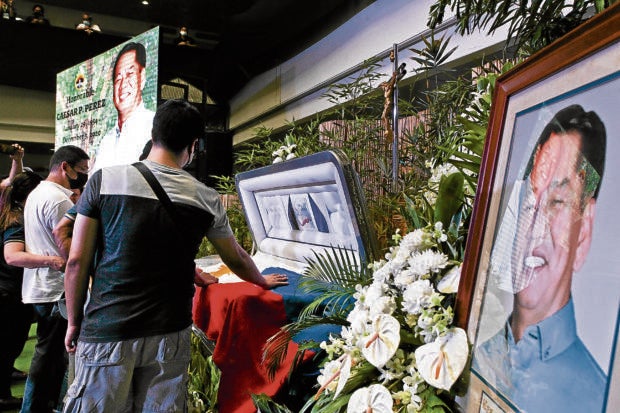 Residents of Los Baños, Laguna, pay their last respects to slain Mayor Caesar Perez during a public wake at the town hall on Tuesday, Dec. 8, 2020. President Rodrigo Duterte has distanced himself from the so-called narcolist, which the family and close aides of the mayor blame as partly to blame for his killing. (Photo by  KIMMY BARAOIDAN / Inquirer Southern Luzon)

MANILA, Philippines — President Rodrigo Duterte’s distancing from the so-called narcolist that is being blamed for the killing of Mayor Caesar Perez of Los Baños, Laguna, is “the height of hypocrisy” and a way to steer clear of any responsibility, international observer Human Rights Watch (HRW) said in a statement issued on Wednesday.

Phil Robertson, HRW deputy director for Asia, said Duterte could not deny having a hand in the narcolist — which consists of the names of government officials with alleged links to the drug trade — as had relied on it to fuel popular support for him even when he was mayor of Davao City.

“Throughout his entire political career… President Duterte has used his target lists as a political tool to intimidate people, including politicians opposing him. During his Davao years, he would read out on TV the names of people he accused of involvement in illegal drugs. Many listed were later killed by the Davao Death Squad,” Robertson said.

“For Duterte to now claim that he had no hand in these lists is the height of hypocrisy. For him to disavow how these lists were used by law enforcers to violate the civil liberties and human rights of those listed is not only disingenuous – it is cowardly,” he added.

During his pre-recorded televised briefing on Monday, Duterte said that the narcolist was not his creation but was based on intelligence reports from the military, the police, and other law enforcement agencies.

According to Robert Laviña, the Los Baños municipal administrator, Perez started getting death threats in 2019, months before the midterm elections, after Duterte read on live television his name as one of the officials in the narcolist.

Perez was shot in the back of the head twice, just a few steps away from the Los Baños municipal hall. He was rushed to a hospital where he died while being revived.

Duterte condoled with the Perez family, insisting that the narcolist was not his.

“I’m sorry that your father died the way it happened,” Duterte said. “But if you tell me about that list — that’s not mine. It’s a collation— all of  it — of the intelligence reports from drug enforcement agencies and the intelligence of the military, police.”

Still, relatives and close aides of the mayor insist that the narcolist was partly to blame for his killing.

And the HRW stressed that international rights groups and other watchdogs should look into the matter.

Duterte has been the subject of international scrutiny due to rights issues arising from his war against illegal drugs.

“Duterte’s lists and the resulting violence are part of what international accountability mechanisms such as the International Criminal Court and the UN Human Rights Council must investigate,” Robertson said.

“The proof of violence unleashed by these lists can be counted in the bodies lying on the streets. There is no denying that listing people on such target lists results in the violation of the rights of these people,” he added.

Duterte’s critics had been suggesting that an investigation be conducted by the United Nations Human Rights Council. But UN members eventually opted instead to call for greater cooperation among themselves to strengthen efforts to protect human rights in the Philippines.