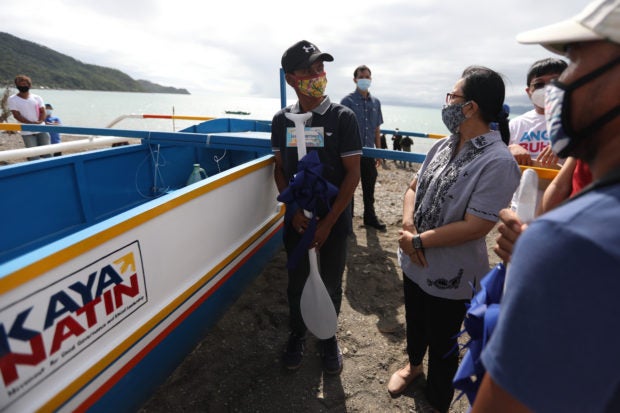 Vice President Leni Robredo and her office’s partner-agencies have provided fishing boats for Aurora fisherfolk whose livelihood was crippled by typhoons. Photo by Charlie Villegas / OVP

According to the Office of the Vice President (OVP), the fishing boats’ recipients were from the Aurora municipalities of Dingalan and San Luis — two coastal towns hard hit after Typhoon Quinta, Super Typhoon Rolly, and Ulysses crossed the Luzon landmass just weeks apart.

Robredo, who was present during the turn-over ceremony in Dingalan on Wednesday, admitted that not much attention was placed on Aurora after the typhoons as the relief and rescue operations focused on Marikina, nearby towns in Rizal province, and the flood-stricken Cagayan Valley.

(I would admit because the calamities were hitting the country one after another, not much of the devastation Aurora experienced were broadcasted.)

(That’s why after Rolly, I went to my home province of Bicol because we share the same fate — Bicol from where I live and you in Aurora, we live in areas that are common pathways of typhoons, so much that we have become accustomed to it.)

Robredo also revealed that after former Aurora governor Chit Ong informed her about the devastation faced by the province, she could not send in teams immediately because her staffers have their hands full with operations in Bicol, Cagayan Valley, and Metro Manila.

She then asked a team in Cagayan to move south to Aurora to assess the pressing needs of people affected by the calamities.

(I do not have any team to send because they are already spread thin, there’s a team in Bicol, in Cagayan, and Isabela.  So I told our team in Cagayan, maybe you could travel south towards Aurora to assess the situation.  And after they arrived here, they informed me of the dire situation in these two towns.)

(We asked them what kind of help we should provide.  They told us that people here need assistance for their livelihood, that’s why we brought fishing boats.)

During her visit, Robredo also distributed around 1,500 relief packs each to Dingalan and San Luis.

Robredo and OVP have been busy responding to Filipinos who were displaced and those who lost their livelihoods due to the recent typhoons.  However, this also meant that they attracted controversy, with no less than President Rodrigo Duterte himself claiming that she was competing with the government.

Duterte also wrongly accused Robredo of starting movements looking for him during the height of the typhoons, despite Robredo never saying such in her official pronouncements and interviews.

As reports of flooding in Marikina and Cagayan Valley trended over social media, Robredo then used her accounts to collate requests for rescue. Her teams then disseminated to authorities on the ground.  [ac]