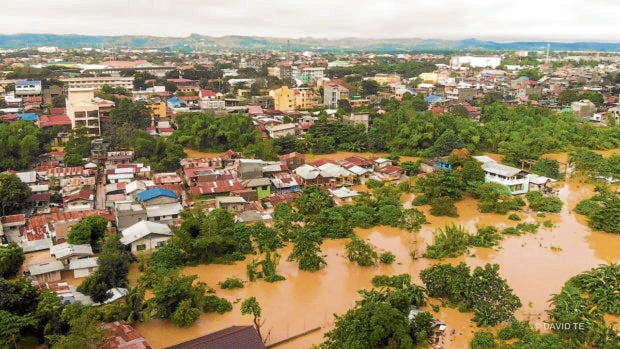 STOPPING FLOODS Floodwaters topping the banks of the Cagayan River submerge the business center and residential areas of Tuguegarao City in this photo taken last month. The government will start dredging the river as an initial step to solve flooding in Cagayan Valley region. —DAVID TE/CONTRIBUTOR

MANILA, Philippines — Environment Secretary Roy Cimatu has given the green light to dredge several sandbars along Cagayan River in a bid to widen the country’s longest river after the widespread flooding caused by Typhoon “Ulysses” (international name: Vamco) in Cagayan and Isabela provinces last month.

The Department of Public Works and Highways (DPWH) identified 19 priority sites where sandbars could be cleared in last week’s meeting of the Build Back Better Task Force, which was tasked with streamlining the government’s posttyphoon rehabilitation efforts. ‘Obstructions’

“Removing these obstructions is the most immediate measure that should be undertaken in order to avoid a repeat of massive flooding in the region, particularly the provinces of Cagayan and Isabela,” Cimatu said in a statement.

The dredging operations will immediately improve water flow along the river while the government explores other medium- and long-term solutions for the flooding in Cagayan Valley, he said.A sandbar is a ridge or deposit of sand that is formed along the shore of the river through currents or waves.

Four of the 19 sandbars recommended as priority sites are in Alcala town, while two each are found in Tuguegarao City and in the towns of Solana, Iguig, Gattaran, Enrile and Amulung.

A sandbar each has been identified in the towns of Aparri, Sto. Niño and Lal-lo.

The Department of Environment and Natural Resources (DENR) said on Monday that the sandbars covered at least 270 hectares and could yield 8.1 million cubic meters of sand.River mouth

According to engineer Jerry Fano of the DPWH-Unified Project Management Office, Cagayan River has an average width of 400 meters, but areas with sandbars have narrowed the water body at an average of 180 m.

The sandbars have also affected river depth, according to the DENR. For instance, the river’s mouth in Aparri town is now 1 m to 3 m deep in the estuary area.“It is imperative that we dredge the river mouth first,” Fano said during the task force’s meeting.

Following deadly floods across Luzon due to consecutive typhoons, the government has pushed for the dredging of the Cagayan and Bicol rivers to avoid a repeat of the disasters.

Cimatu earlier approved the request of Cagayan Gov. Manuel Mamba to dredge some 30 kilometers of Cagayan River. The project is set to check the bottleneck sites of the river known as “Magapit Narrows,” which meanders through Lal-lo, Alcala and Gattaran.

Other solutions being eyed for Cagayan River are the construction of flood control dams, installation of retaining walls along its slopes, and reforestation of the watershed and easement areas. INQ