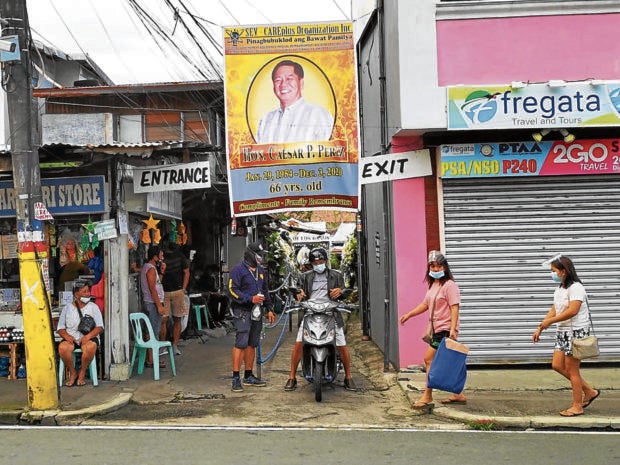 The family of Mayor Caesar Perez of Los Baños, Laguna province, and several donors have offered at least P1-million reward for information that may help solve the murder of the official, who was gunned down at the municipal government compound last week.

On Monday, the municipal council also proposed a P500,000 reward to help speed up the probe, said Councilor Janos Lapiz.

Perez was the latest local official on President Rodrigo Duterte’s narcolist who was killed by unidentified persons.

Investigators have zeroed in on a white Mitsubishi L300 van, believed to be the assailants’ getaway vehicle.

Daniel Daganzo, provincial director of the National Bureau of Investigation, said the van was parked “the whole day” on Dec. 3 along Jamboree Road near the municipal hall compound. The NBI is conducting a parallel investigation with the Philippine National Police.

Security camera footage showed a passenger alighting from the van and appearing to be “surveying” the vicinity at 11 a.m., or about 10 hours before Perez was shot at 8:45 p.m., he said.

Daganzo said the van had a fake license plate.

Perez, 66, was hit in the head and chest, and died at the hospital.

A source privy to the case said the gunman used a 5.56-mm rifle and was positioned about 30 meters (98 feet) away.

“It was a sniper and the van was used as a cover,” said the source, who asked not to be named pending the release of official government reports.

According to Police Lt. Col. Chitadel Gaoiran, spokesperson for the Laguna police Special Investigation Task Group, the police have yet to disclose any information on Perez’s murder while investigation is ongoing.

Perez, who was on his third term, had repeatedly denied any involvement in the drug trade. He also served as mayor from 2001 to 2010 and served as Laguna vice governor from 2010 to 2013.

In 2017, Perez was stripped off his control over the local police after his name appeared on the National Police Commission’s list of officials allegedly involved in the narcotics trade.

Robert Lavina, municipal administrator, said Perez went to the Philippine Drug Enforcement Agency in Calabarzon (Cavite, Laguna, Batangas, Rizal and Quezon) region in October to submit himself to a drug test in the hope of having his name cleared.

“Right there and then, (Perez) tested negative [to illegal] drug use,” Lavina said in a phone interview on Monday.

Lavina said a town-wide motorcade was set for Tuesday before the mayor’s remains would be brought to the town hall for public viewing.