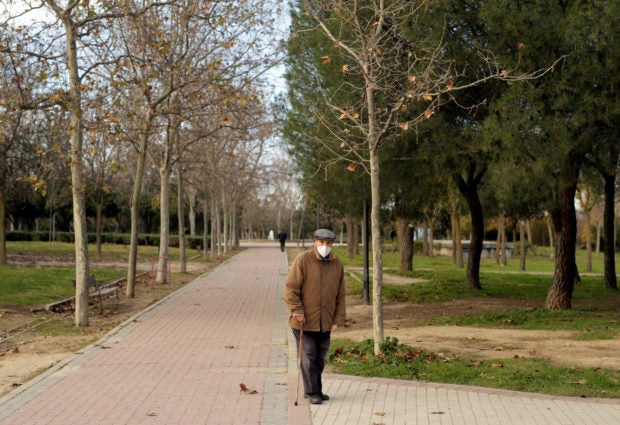 A man wears a protective mask in a park in Madrid, Spain December 6, 2020. REUTERS/Javier Barbancho

MADRID — When Elena Lorenzo’s 86-year-old sister Rosario fell in the middle of the night in her home in Spain’s northern Galicia region and her husband struggled to assist her, they knew it was time to get help. But a nursing home was out of the question.

“There had been talk of a nursing home, but that was before COVID,” Lorenzo said, recalling her sister’s fall a few weeks ago.

“An at-home carer will be wary of putting you at risk, plus you stay in your house: you have your slippers, your bed, your decorations.”

Business is booming for Spanish firms offering at-home elderly care, as families shun nursing homes after they became COVID-19 hotspots in the first wave of the pandemic.

YoCuido, another Spain-based firm whose search engine filters carers by location, ability, and schedule compatibility, said ads from families seeking at-home carers since March were 35% higher than before the pandemic.

“Many people are still afraid (of nursing homes), and even more so of daycare centres, because of the contagion risk transport poses,” said Ignacio Fernandez, president of Spain’s Federation for Dependence, an advocacy group.

State aid for nursing homes lost 15,522 recipients between December and September, the Institute for Social Services and the Elderly said, a 9% drop reflecting COVID deaths and pervasive anxiety.

More than 20,000 people died of COVID-19 or suspected COVID-19 in nursing homes in Spain during the first coronavirus wave, according to preliminary official data reported by El Pais newspaper and broadcaster RTVE. The Health Ministry declined to comment.

“I had a horrendous, nightmarish experience with nursing homes,” said English teacher Luisa Lamuno, whose mother was in a nursing home before being taken to intensive care in a hospital where she died, officially from a respiratory disease.

She said she regretted that she could not afford to care for her mother at home before the pandemic struck. Many others also do not have the means.

To try to address these problems, the government assigned 600 million euros to dependency coverage in its 2021 budget, breaking from policy which left such funding up to regional governments.

Over 1 million elderly Spaniards require care, with the European Aging Network, which represents both individual carers and businesses, projecting that number to reach 2.1 million by 2030. Only 400,000 are in nursing homes, leaving a wide gap for private companies to fill.

“Where there is need, there is business opportunity,” Ramirez said.

Executives from home care groups Depencare, Cuideo, and YoCuido told Reuters that in a fragmented market largely populated by family-run companies, they expect a wave of consolidation in coming months as investment funds circle.

Cuideo, which recently expanded to Paris, closed a 1.6 million euro venture capital round in July.

One sector that’s growing in Spain is where carers come and live in an elderly person’s home, said Depencare CEO David Gonzalez, adding: “about seven of every 10 requests we get are for live-in services.”