The interconnected diptych ‘encapsulated the weaving traditions as a unifying element’
By: Elizabeth Lolarga - @inquirerdotnet
Philippine Daily Inquirer / 05:02 AM December 06, 2020 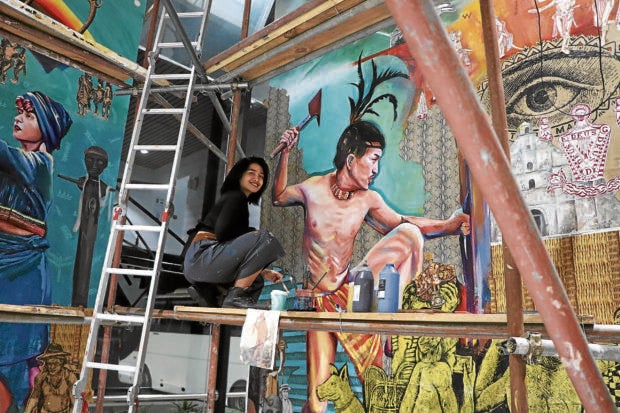 SIGNATURE STYLE Muralist Venazir Martinez, 23, is known for the red string in most of her artworks in Baguio City’s streets. She is among six artists who have been chosen to paint the Cordillera mural at the lobby of the Baguio Convention Center. —CONTRIBUTED PHOTO

As the only woman and the youngest artist at 23 to interact with veteran artists Ben Cabrera, Leonard Aguinaldo, Roland Bay-an, Kawayan de Guia and John Frank Sabado in painting the Cordillera mural that now adorns the lobby of Baguio Convention Center, Venazir Martinez was “literally in tears” when she was chosen.

Martinez said the artists were all handpicked by National Artist Cabrera and validated by Baguio Arts and Crafts Collective Inc., the organizers of the recent Ibagiw Festival. Among the criteria used was “our works’ impact on the Baguio community,” she said.

The six artists’ common ground was “cultural identity,” she said. Their concept for the mural was based on the commemoration of the 500th anniversary, or the quincentennial, of the arrival of the Europeans in the Philippines. The quincentennial will be observed on March 16, 2021.

In the muralists’ statement, they wrote that their work “envisages and immortalizes the local narratives of the Cordillera region that are often overlooked in Western accounts in the past 500 years.”

Martinez said: “We focused on the Cordillera’s historical progression from the precolonial setting to the contemporary.”

Their concept was parallel with the installations that National Artist Kidlat Tahimik designed and curated on the convention center’s entrance and ground floor during the festival duration. Tahimik featured, among others, a galleon. 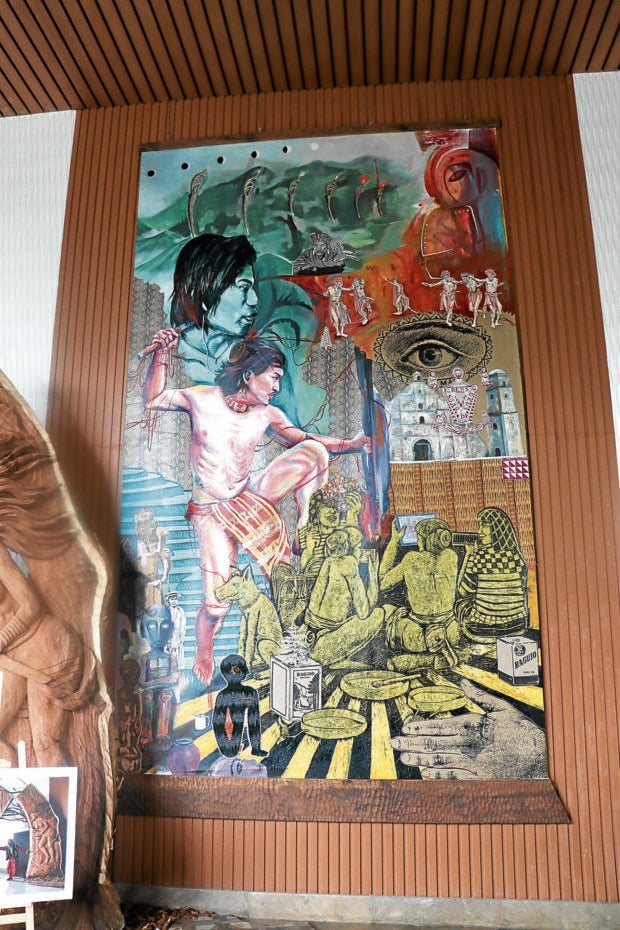 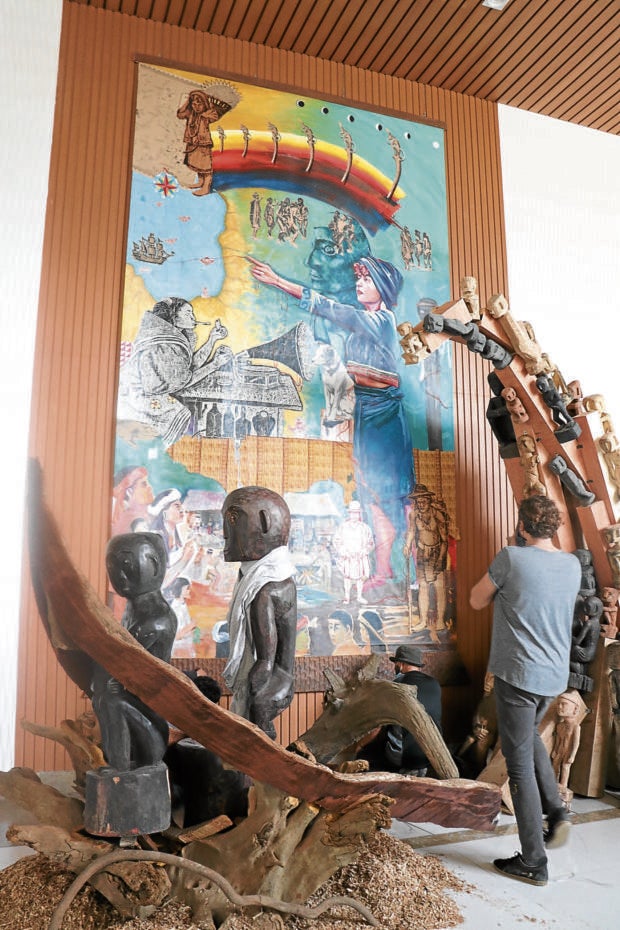 INTERCONNECTION The mural features the blended styles of Baguio artists to immortalize the local narrative and collective identities of the Cordillera. —CONTRIBUTED PHOTOS

Asked how she and the others adjusted to their individual styles to create the common theme, Martinez said, “The process of blending our styles was complicated. Our styles were indeed distinct, and essentially [we had to] integrate them into one canvas. We did not focus on the positions of the elements nor the subjects that were chosen.”

“Instead,” she said, “we played around with existing strokes and splashes formed during the opening of the Ibagiw Festival on Nov. 6. We slightly did a performance art by splashing random colors on the canvas. We didn’t know what we were doing! After a week, we started meshing our signature styles and elements, further enriching the story of the murals.”

The interconnected diptych has a red string running through it, serving as “a unifying element,” she said. It “encapsulated the weaving traditions of our indigenous groups. [The color red] is mostly found in my works in the streets and connects the different stories painted by the whole team.”

The mural is on permanent display at the lobby of the convention center. —CONTRIBUTED

Read Next
Eastern Samar inmates not giving up on Christmas
EDITORS' PICK
Metro Manila to remain under COVID Alert Level 2 until December 15
IATF tightens border control, suspends entry of fully vaxxed nationals from ‘green’ countries
Villar Group gears up for AllValue Shopping Party on Dec. 3; around P 1-million promos and discounts up for grabs
Duterte open to making jabs mandatory; Cabinet mulls ‘pressuring’ the unvaccinated
Legarda: Ending Violence Against Women, a cause for all
A delightful blessing!
MOST READ
Quiboloy warns of ‘much worse than Omicron virus’ if his ‘persecution’ is not stopped
Marcoleta defends pol ads on ABS-CBN
Omicron poses ‘very high’ global risk, countries must prepare–WHO
Gov’t plans to open COVID-19 vaccination for 5- to 11-yr-olds by January 2022
Don't miss out on the latest news and information.