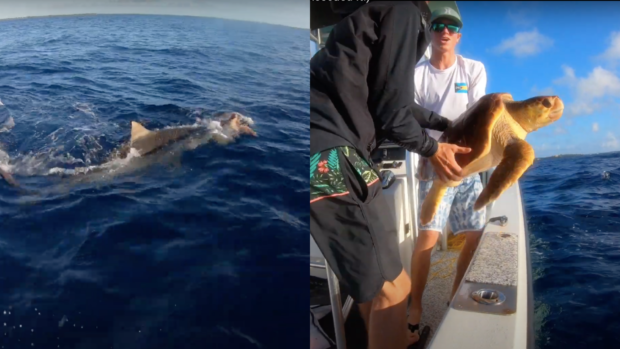 Kai Survance (left) and his friend Bronson Russell save a turtle from a tiger shark attack. Images: Screengrab from YouTube/Kai Owen Fishing

Two men saved a turtle from the jaws of a tiger shark during a fishing trip in the Abaco Islands in the Bahamas.

Kai Survance and his friend Bronson Russell were looking for fish called wahoo on Nov. 22 when they spotted the shark.

“We were three miles off-shore and it was splashing around. We thought it was a marlin actually,” Survance told Fox News yesterday, Dec. 4.

The two also shared a footage of the shark attacking the turtle on Survance’s YouTube page called Kai Owen Fishing. The video shows the fishermen steer their boat nearer to the shark before eventually realizing that it had a turtle in its mouth.

The shark—still holding the turtle in its mouth—then swims near the end of the boat. After continuously struggling, the  turtle eventually manages to break free from the shark’s grip.

Following the attack, the shark swims deeper into the ocean, while the turtle, who appears to be shocked, floats on the water’s surface. With the shark no longer in the area, Russell carried the turtle out of the water and into their boat.

The two then drove the boat about three to four miles toward shallow water before releasing the turtle back into the ocean. Following their unexpected rescue, Survance described it as a “once-in-a-lifetime” event.

“I’ve spent countless hours on the water,” he said in the report. “From when I could walk and swim, I’ve been on the water…  and that’s gotta be one of the craziest things I’ve seen.” Ryan Arcadio /ra