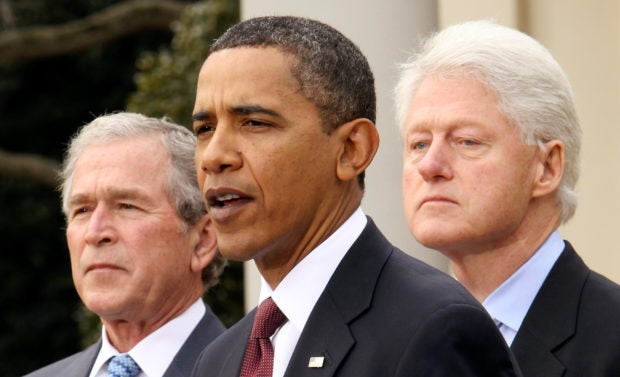 Former U.S. Presidents Barack Obama, George W. Bush and Bill Clinton said they were willing to be vaccinated against the novel coronavirus on television in order to ease any public skepticism over the safety of new vaccines.

“I may end up taking it on TV or having it filmed, just so that people know that I trust this science,” Obama, a Democrat who left the White House in 2017, said in an interview with Sirius XM radio that aired on Wednesday.

Bush, a Republican and Obama’s predecessor, is willing to get a vaccine on camera once the U.S. Food and Drug Administration grants emergency approval, according to Freddy Ford, Bush’s chief of staff.

Clinton, a Democrat, will “definitely take a vaccine as soon as available to him, based on the priorities determined by public health officials,” his spokesman, Angel Urena, wrote in an email. “And he will do it in a public setting if it will help urge all Americans to do the same.”

An FDA panel of outside advisers is due to meet on Dec. 10 to discuss whether to recommend emergency use authorization of a vaccine developed by Pfizer Inc with German partner BioNTech shown to be 95% effective at preventing illness. U.S. health officials predict the first inoculations could start days or weeks later.

Moderna Inc’s vaccine, which employs similar technology as Pfizer’s and was nearly 95% effective in its pivotal trial, is expected to be reviewed a week later.

A significant minority of Americans are skeptical of the science behind vaccinations and wary of the record speed at which COVID-19 vaccines have been developed, although 58% of Americans told Gallup pollsters last month they would get a coronavirus vaccine, up from 50% in September.

U.S. President Donald Trump, a Republican who recovered from a bout with COVID-19 earlier this year, has touted his administration’s involvement in funding some vaccine development, but the White House did not immediately respond to questions about his predecessor’s comments on Thursday.

The office of Vice President Mike Pence referred reporters to earlier interviews in which Pence said he would be “proud to take a vaccine the moment that it’s available.”

Ivanka Trump, Trump’s eldest daughter and a senior White House adviser, said in September she would be willing to receive a vaccine on the ABC talk show “The View.”

“I applaud these pronouncements to help assure the public that the vaccine is safe and effective,” she wrote on Twitter on Thursday in response to news reports about the former presidents’ pledge. “My offer holds to do the same.”

United Nations Secretary-General Antonio Guterres would likely take a vaccine as soon as one is available, though after those who need it first have access to it, like front-line workers, U.N. spokesman Stephane Dujarric said on Wednesday.

Asked if Guterres might take the vaccine publicly, Dujarric said: “We’ll see if he does it publicly. I don’t know if you want to see him take off his shirt publicly.”