In Canada, demand for puppies soars during COVID pandemic, so do scams 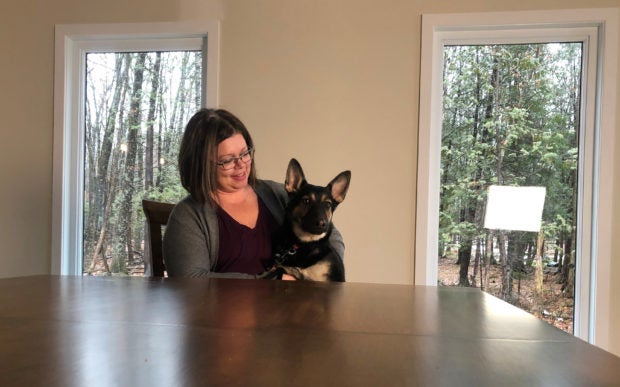 Vicki McKenzie with her familys new dog Oakley, is seen at home in LAnge-Gardien, Quebec, on December 1, 2020. – Demand for puppies has soared during the pandemic, and scammers are taking advantage — swindling hundreds of Canadians looking for a pet to ease their loneliness during lockdowns.Vicki McKenzie wanted a dog for her 11-year-old daughter Oceane, who suffers from cerebral palsy. “Because she doesn’t speak and can’t run, it’s hard for her to keep up with other 12-year-olds,” McKenzie told AFP. (Photo by Michel COMTE / AFP)

OTTAWA, Canada – Demand for puppies in Canada has soared during the pandemic, and scammers are taking advantage — swindling hundreds of people looking for a pet to ease their loneliness during lockdown.

Vicki McKenzie wanted a dog for her 11-year-old daughter Oceane, who suffers from cerebral palsy.

“Because she doesn’t speak and can’t run, it’s hard for her to keep up with other 12-year-olds,” McKenzie told AFP.

“So it meant a lot to the family to get a dog for her,” she said.

After being on a waiting list for a service animal for more than four years, the family, which lives on a treed acreage in L’Ange-Gardien, Quebec, decided to try to find a dog that they could train themselves while in lockdown.

An ad for a Labrador-Retriever on Canadapups.com, however, turned out to be a scam that cost McKenzie Can$300 (US$232).

Oceane was inconsolable. “She cried a lot,” McKenzie said.

The Toronto Humane Society, for example, received more than 10,000 calls in just the first six months of the pandemic.

“And we typically see interest in adoptions go up at Christmas,” the society’s Hannah Sotropa said. It re-homes an average of 3,000 animals per year.

“I normally get between two and seven calls a month for puppies. Lately it’s been about seven to 15 calls a day,” said Ontario breeder Carol Bodnieks of Newfhill Kennels.

At the same time, the number of available puppies plummeted due to pandemic measures curtailing access to stud services and veterinary care.

Some breeders had their identities stolen and used in scams. It also became a dangerous business, with two armed thefts of puppies reported in Toronto last month.

The high demand and low supply sent prices soaring, and created an opportunity for scammers to exploit, making animal adoption now the fastest growing online fraud in Canada, according to anti-fraud agencies.

“Some families turned to the internet to look for a pet, thinking a pandemic puppy or kitten would help ease some of the uncertainty. Many have come across scammers advertising animals that don’t exist and are never shipped,” Better Business Bureau spokeswoman Jessie St-Cyr said.

“Many victims,” several of whom now work from home, she said, “wanted to adopt a puppy in order to ease their isolation and brighten their lives during the pandemic.”

Public health measures to slow the spread of the Covid-19 illness, meanwhile, gave crooks the idea to ask for money up front and make excuses as to why buyers couldn’t see a prospective pet in person.

Victims were often told that they needed to send money for special climate-controlled crates, insurance and a non-existent Covid-19 pet vaccine.

The Better Business Bureau and the Canadian Anti-Fraud Centre received almost 500 complaints about puppy scams so far this year — up more than three-fold from 2017, and representing one-quarter of all reported online scams.

Would-be buyers lost an average of Can$1,000 (US$775) each, according to an investigative study the Bureau released Wednesday.

McGowan Weddig of Guelph, Ontario said his family was “looking at getting our first puppy because we’ve only had goldfish in the past.”

After answering an online ad, the family received documents that “looked perfectly legitimate.” The scammers “checked all the right boxes” in terms of due diligence, Weddig said.

But, he concedes, “It was our first puppy so our emotions may have gotten in the way.”

After realizing he’d been cheated, Weddig said: “I was mad because we’re in the middle of a pandemic and some people are preying on others. I lost faith in people.”

According to the Better Business Bureau study, some 80 percent of advertising links that appear in internet searches for pets “may be fraudulent.”

They most often offer for sale Yorkshire Terriers or French Bulldogs.

One such scam described Pomeranian puppies that were “guaranteed to be in good health” and coming with “all their papers.”

The seller purportedly arranged shipping, but then claimed the dog missed its flight and asked for more money to rebook and for an overnight kennel stay near the airport.

After licking their wounds, McKenzie and Weddig eventually got puppies.

“It turned out well in the end,” said McKenzie, as Oceane played nearby with frisky German Shepherd puppy Oakley.