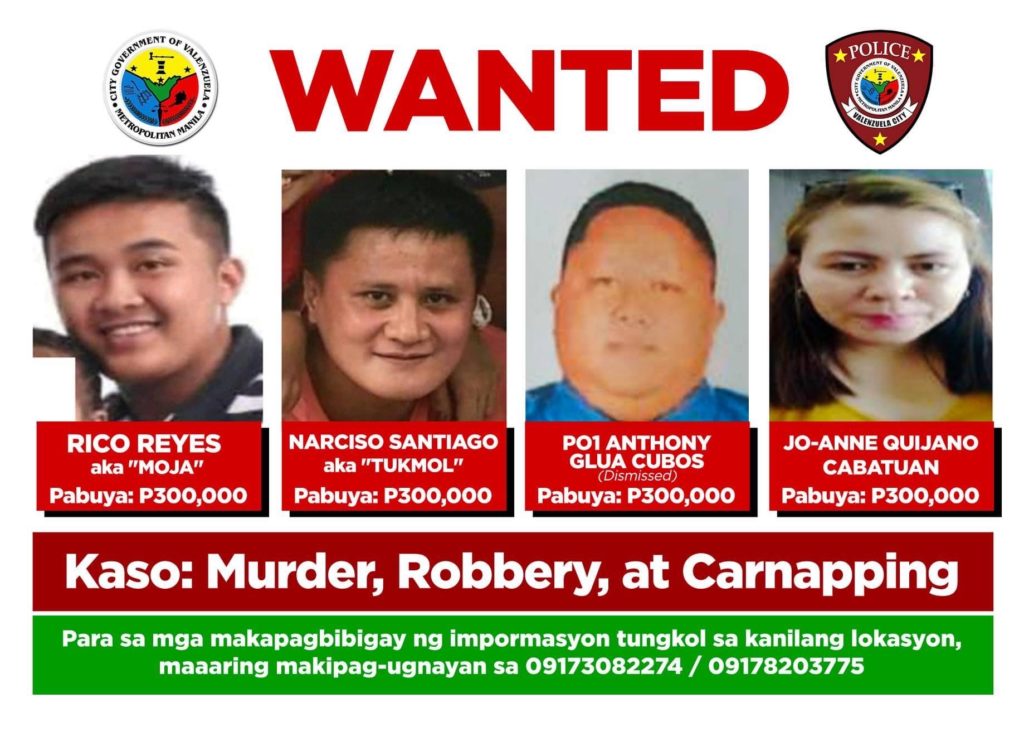 Law enforcers are still hunting for Rico Reyes, Narciso Santiago and dismissed police officer Anthony Cubos, all suspects in the robbery-killing of messenger Nino Luegi Hernando in Valenzuela City. A reward of P300,000 awaits anyone who could lead police to where the three suspects are. PHOTO FROM VALENZUELA CITY LGU

According to a report by the Philippine National Police (PNP) National Capital Region Police Office (NCRPO) on Thursday (Dec. 3), the Valenzuela City police tracked down Jo-Ann Cabatuan, 31, at the village of Lourdes, Minalin town, Pampanga province around 5 p.m. on Tuesday (Dec. 2).

Police served the warrant of arrest on Cabatuan for a case of robbery with homicide issued by Judge Snooky Maria Ana Bareno-Sagayo, of the Valenzuela Regional Trial Court last Nov. 19.

A separate case of car theft is awaiting the suspects.

No bail was recommended for Cabatuan’s temporary release.

She was the third of six suspects in the killing last Oct. 9 of Nino Luegi Hernando, 39, after he was robbed coming out of a bank on Maysan Road in Valenzuela. Hernando was shot and killed by motorcycle-riding men.

A total of P442,714 in cash, which was for payroll, was taken from Hernando. His motorcycle, a Yamaha Nmax, was also stolen by the suspects.

Two of Cabatuan’s other accomplices—Edgar Batchar and Michael Castro—were arrested last month. Castro is a police officer with corporal rank at the Northern Police District drug enforcement unit who is on Awol or absent without leave.

Cabatuan had initially been listed as a witness but was eventually considered a suspect after investigators learned she had provided information on Hernando’s whereabouts, including his routine of withdrawing P2 million every week at a Valenzuela bank.

She was also identified as the live-in partner of a certain Henry Rubio, who was jailed for rape after Hernando testified against him.

Rubio was a friend of dismissed PO1 Anthony Cubos, who was identified as the mastermind of a Bulacan-based robbery and gun-for-hire group believed to be behind the mission to rob Hernando.

Brig. Gen. Vicente Danao Jr., NCRPO chief, urged the public to report to authorities any information of the other suspects, who are still at large—Cubos; Rico Reyes, alias “Moja,” 21; and Narciso Santiago, alias “Tukmol,” 37.

The Valenzuela City government is offering a cash reward of P300,000 to anyone who could provide information on the whereabouts of the three suspects who are still on the loose.

Read Next
KMP tags Sinas in alleged ‘planting of evidence’ vs red-tagged activists
EDITORS' PICK
PNP’s Covid-19 cases jump to 9,809; 52 new infections logged
Pope Francis to miss events due to new flare up of leg pain—Vatican
New Year, New Rediscoveries
More than 150 National Guard in Washington for Biden inauguration test positive for coronavirus
Is your company a growth champion? Stand up and be recognized!
Acer Philippines welcomes you to its first flagship store
MOST READ
Dustin Poirier knocks out Conor McGregor at UFC 257
AFP to apologize to UP alum falsely included in list of NPA members — Lorenzana
Ellen DeGeneres, too, is baffled by viral Filipino soda ad
WATCH: Alex Gonzaga joined by family in Amanpulo honeymoon
Don't miss out on the latest news and information.