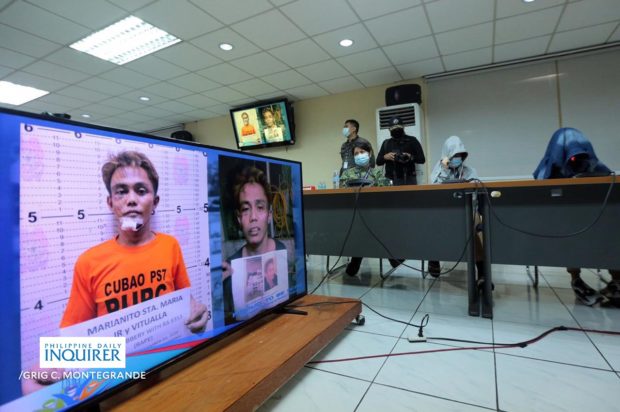 At least two female rape victims (shrouded in cloth) of suspect Marianito Sta. Maria (whose picture is flashed on the screen) recount their bitter experience at a news briefing in Camp Karingal, Quezon City on Thursday, Dec. 4, after the suspect was caught by police operatives-INQUIRER/GRIG C. MONTEGRANDE

Sta. Maria was arrested by Cubao police led by Police Major Jowilouie Bilaro during a manhunt operation along Edsa in Malibay, Pasay at 3:40 a.m.

The police operation was launched after a freelance therapist, whose name was not disclosed for her security, reported that Sta. Maria allegedly stole cash from her and raped her last Nov. 20.

The victim said Sta. Maria booked for a two-hour ventosa or cupping therapy through social media. They agreed to meet up at an apartelle in Cubao, Quezon City.

The victim said the suspect did not pay before the massage session at the apartelle, claiming he left his money inside his car being driven by his cousin.

During the massage therapy, the victim asked for payment for the second time, but the suspect declined, saying that his cousin had an “accident.”

After the massage session, the victim demanded payment again for her services but the suspect instead pulled out a knife and threatened the victim. Sta. Maria then took the victim’s cash and cellphone.

Next, Sta. Maria forced the victim to undress and sexually abused her.

Other victims summoned to the police station also positively identified to investigators that Sta. Maria was the “same person who raped them.”

Sta. Maria is detained at QCPD while cases for robbery with rape are being prepared before the  Quezon City Prosecutor’s Office. [ac]