Red-tagging a cover-up for ‘incompetence’ – Makabayan 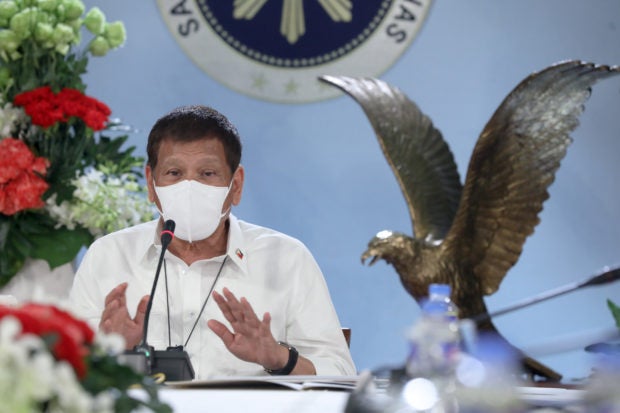 President Rodrigo Duterte’s red-tagging of leftist members of the House of Representatives and activist groups endangers their lives and is meant to cover up his “incompetence” in solving problems created by the pandemic and recent typhoons, the Makabayan congressional bloc said on Tuesday.

Duterte on Monday night accused Makabayan of being a front of the Communist Party of the Philippines (CPP) and the New People’s Army (NPA). He also said Bayan Muna Rep. Carlos Zarate looked like “dog poop.”

Zarate, in an online press briefing on Tuesday, said he would not respond to the President’s insults because “it will divert the public from the real issues in the country.”

“We think all of these are just meant to cover up the incompetence and the significant problems in the country now and they are trying to cripple us and to silence us, especially in our active role as lawmakers in Congress,” he said.

Aside from Bayan Muna, the progressive bloc includes the party list groups Gabriela, Alliance of Concerned Teachers, Kabataan and Anakpawis.

Nothing wrong with leftist

Also reacting to the latest statements from the President, the Commission on Human Rights (CHR) said Red-tagging would endanger lives.

CHR spokesperson Jacqueline de Guia said there was nothing wrong with identifying politically as leftist, a constitutionally guaranteed freedom.

“The CHR does not really delve into who is communist or not. That is something we are clear about. We would just like to caution the government against making sweeping generalizations,” she said in a television interview.

“There is no express declaration from our courts of who terrorists are. We have cautioned the government against Red-tagging individuals who have not clearly taken up arms, and there must be a clear delineation between people who have joined the armed combat, and those who are not,” she added.

In a statement, Gabriela Rep. Arlene Brosas said the “useless tirades” and “incoherent rants” of the President against Makabayan were a “pathetic ploy to mask the government’s inaction against the worsening crisis.”

“President Duterte proves that providing socioeconomic aid and programs amid the pandemic and series of typhoons is the least of his priorities. Accusing us of being fronts of the CPP-NPA will not change the fact that his incompetence has intensified the crisis we are facing today,” Brosas said.

She said that by making “these baseless accusations, Duterte is playing judge, jury, and executioner by putting the law into his own hands.”

“He practically gave the green light to more extrajudicial killings, human rights violations and illegal arrests, not just against activists but those who are seeking reforms in governance through parliament and airing legit criticisms,” Brosas said.

The CPP has been leading the half-century-old insurgency, fueled by decadeslong economic, social and political injustice.

Bagong Alyansang Makabayan (Bayan) secretary general Renato Reyes called Duterte “Red-tagger-in-chief” who had no evidence to back his accusations.

“He should be held accountable for every activist who was killed, jailed, tortured or disappeared, and why many are also pushing back against him,” Reyes said.

Extrajudicial killings, disappearances, illegal or arbitrary arrests, detention, fake or forced surrenders form a pattern of human rights violations that has already been called out multiple times as a baseless vilification campaign against government critics, according to Cristina Palabay, secretary general of the human rights group Karapatan.

“These forms of political repression and attacks against dissenters must stop. These do not only lead to a worse climate of impunity in the country: These acts of State terrorism also seek to cover up the administration’s incompetence, negligence and irresponsible governance,” Palabay said.

Presidential spokesperson Harry Roque said Duterte only wanted to expose the lies of the activist groups when he called them legal fronts of the CPP.

Roque acknowledged that membership in the communist party was not a crime but said the problem was that the CPP could not be separated from the NPA, which is engaged in the crime of rebellion and killing civilians and soldiers.

Members of militant groups should come out as communists but should condemn the use of arms against the government, he said.

“They’re good in parliamentary politics, they’re elected, they have the most party list groups. Why don’t they renounce the use of arms? That is all that is being asked. As long as they have not renounced it and they are involved in the use of violence and arms against the republic, that is criminal,” he said.

“All we’re asking for is, you can be a red without necessarily endorsing the use of arms,” he added.

But critics have repeatedly warned that red-tagging violates the right to presumption of innocence and the right to due process, and is meant to discourage activism and critical thinking.

The National Union of Students of the Philippines (NUSP) said that while the Makabayan bloc did not participate in armed struggle, it was still clear that the roots of armed conflict “are concrete and remain unresolved.”

“Who are the ones that voluntarily deprive our farmers, workers and national minorities of their land and livelihood? Who is responsible for the discontinuation of peace talks? It is the state run by Duterte and it has always been Duterte who gives the people grounds to resist,” said Jandeil Roperos, NUSP national president.

The group said the government provided a hefty budget of P19.1 billion for the NTF-Elcac instead of using the money to give relief for victims of recent calamities and those displaced by the pandemic.

“In the midst of a global health crisis and calamities hitting our country leaving many Filipinos hungry, jobless and suffering from the limitations of being able to enjoy basic social services, Duterte is more adamant on persecuting Filipinos to strengthen his tyrannical rule,” NUSP said.

—With reports from Leila B. Salaverria, Krixia Subingsubing and Meg Adonis