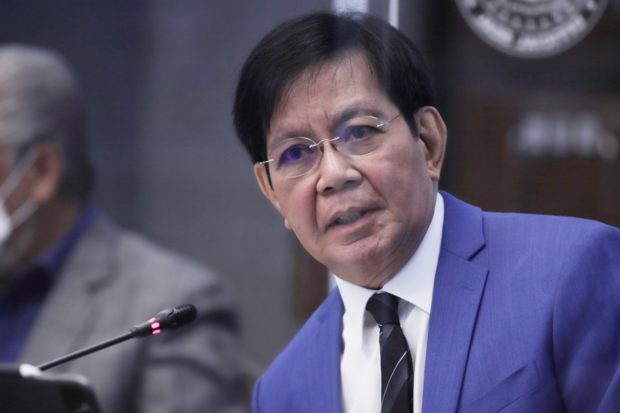 MANILA, Philippines — “The burden of proof is on you,“ Sen. Panfilo Lacson told alleged former rebels presented by the security sector in a Senate hearing as witnesses linking some lawmakers to the Communist Party of the Philippines (CPP).

These lawmakers being linked to the CPP are members of the Makabayan bloc in the House of Representatives.

Lacson is leading the investigation as chair of the Senate defense committee.

Bayan Muna Rep. Carlos Zarate and Kabataan party-list Rep. Sarah Elago were also tagged as having links with the CPP.

They have all denied the allegation.

“That’s their defense,“ Legaspi said in response to Lacson. “Honestly, the truth that they‘re saying, it’s not all the time that you can prove it,“

“There are so many who have done something wrong but were not punished. Why? Because there’s a lack of evidence. But that doesn’t mean that something did not really happen,“ he added.

“But that’s how due process works,” Lacson said.

Jeffrey Celiz, another witness presented by the security sector, meanwhile, believes that documentary evidence is not the only form of proof that can be presented.

“What they’re asking from us are papers. My answer to them: Preponderance, correlation, a pattern of experience, testimonies, and practices will also form as evidence,” Celiz said.

“A syndicate, a criminal group — you don’t need papers to prove it,” he added.

Casiño, who was present at the hearing, decried the witnesses’ allegation, saying, partly in Filipino: “This is the problem of Mr. Celiz and others who have been accusing us. Mr. Celilz said he could not prove that we belong to the CPP because it’s a complex organization. And yet, at every turn, he accuses me in public that I am a CPP member.”

“He himself said he could not prove it, and yet, the repeated accusations, right in this hall, for something that he himself could not prove — that is red-tagging. That is guilt by association, that is trial by publicity. That’s what we don’t like here,” Casiño added.

Casiño said the security sector should just go to the courts.

“This is the problem with red-tagging. If they have a case, if they have evidence, there are proper forums — the courts,” he said. “But you do not bring that to the public. .You do not accuse openly when you have no evidence,” he said.

Before ending the hearing, Lacson also urged the security sector to prove their allegations in court. The Senate, he pointed out, could only investigate in aid of legislation.

“f you believe that you have enough evidence to secure a conviction or at least get past the probable cause level, then go ahead,” the senator said. “Nobody’s preventing you. In fact, they’re challenging you to do that precisely,” Lacson said.

Zarate: I am not an official of CPP