DepEd probe: Why were students in Cebu tourism event? 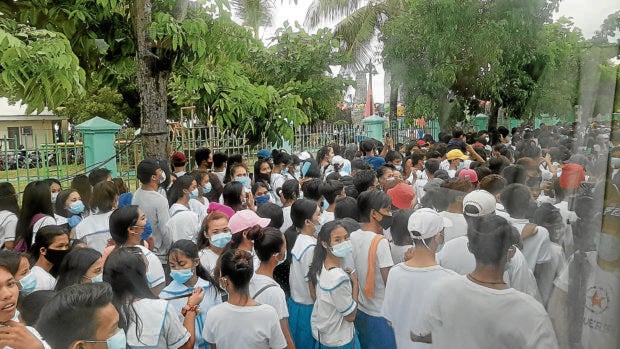 GRAND WELCOME Students in school uniform are part of the crowd that greeted guests during the Suroy-Suroy Sugbo tourism event in Madridejos town on Bantayan Island, Cebu. —CONTRIBUTED PHOTO

CEBU CITY, Cebu,Philippines — The Department of Education (DepEd) in Central Visayas is investigating last week’s tourism activity in Madridejos town, Cebu province, after learning that students in school uniforms were told to go out of their houses to greet participants of the three-day event.

Salustiano Jimenez, the DepEd regional director, said a team was created to validate reports about the presence of students during the Suroy-Suroy Sugbo on Bantayan Island, which was organized by the provincial government to revive the local economy amid the COVID-19 pandemic.

SanctionsAlso among the guests were Presidential Assistant for the Visayas Michael Lloyd Dino and candidates of the recently held Miss Universe Philippines 2020.Jimenez said the DepEd would determine the appropriate sanctions for any school official proven to be responsible for bringing students to the Nov. 27 event.

“[The] DepEd will see what we can do if teachers or principals will be proven to be behind this incident. We shall also determine the gravity of the situation so we can assess what will be the sanctions, if any,” he said.

On Sunday, Interior Secretary Eduardo Año announced an investigation into the event.

In a text message to reporters, Garcia said she was willing to be “questioned” regarding the activity.

“I welcome his (Año) fact-finding probe. And I am offering myself to be questioned first and foremost,” she said. “After all, I initiated the mini Suroy-Suroy. And the crowd, wearing face masks, in an open beach area, was there to watch a presentation during the Madridejos Suroy-Suroy stop,” Garcia said.

Jimenez said he did not receive any request to allow students to go out of their homes to attend the event, stressing that in-person classes had yet to resume to prevent the spread of the virus.

The government’s health protocols still limit the movement of people and require minors “to remain in their residences at all times.”Jimenez advised all schools in Central Visayas to follow the government’s health protocols and seek permission from DepEd officials before holding any school-related outdoor activities.“Considering [that] we’re under MGCQ (modified general community quarantine), they should really ask permission because there are policies,” he said.

Madridejos Mayor Salvador dela Fuente said local officials were caught off-guard and did not expect throngs of people to attend the event.

In Manila, Roque, who was criticized after he addressed the crowd in Madridejos, said there should be guidelines on activities in open-air venues.

“What I would suggest is that there be guidelines in open-air venues. I know that social distancing must really be observed and I reiterated this to the people but maybe there should be clear [guidelines],” Roque said at a press conference in Malacañang on Tuesday.He said that in areas under MGCQ, such as Bantayan Island, rules on mass gathering were supposed to be more relaxed.Roque clarified that the local government had organized four events in Bantayan, but it was the final activity held by the beach in Madridejos town that drew a large crowd.

“[If] there’s going to be an investigation, well and good! So that it can be showed that I reminded the people to do social distancing. Maybe what I did not realize is that I’ve come to a point that people will come out [to] see me. So now, maybe, I would no longer go out if there is [a] crowd,” he added.

Roque said Vice President Leni Robredo, during her visits to typhoon-stricken areas, was also photographed going near and shaking hands with locals but did not get much criticism for violating health protocols.

“What hurt me is that I was the one who became the focus of criticism. Why is it that when Vice President Leni was seen shaking hands, isn’t that a violation of the [regulation] on social distancing?” he said.

In a statement, lawyer Barry Gutierrez, spokesperson for the Office of the Vice President, took umbrage at Roque’s finger-pointing.“You were the one who held a mass gathering on the beach and you would still point toward the VP (Robredo)? Wow lang,” he said.

Gutierrez said he looked forward to the day “when officials in this administration can just be accountable, accept responsibility and commit to doing better, instead of bashing the VP every time the Filipino public call out their shortcomings.”