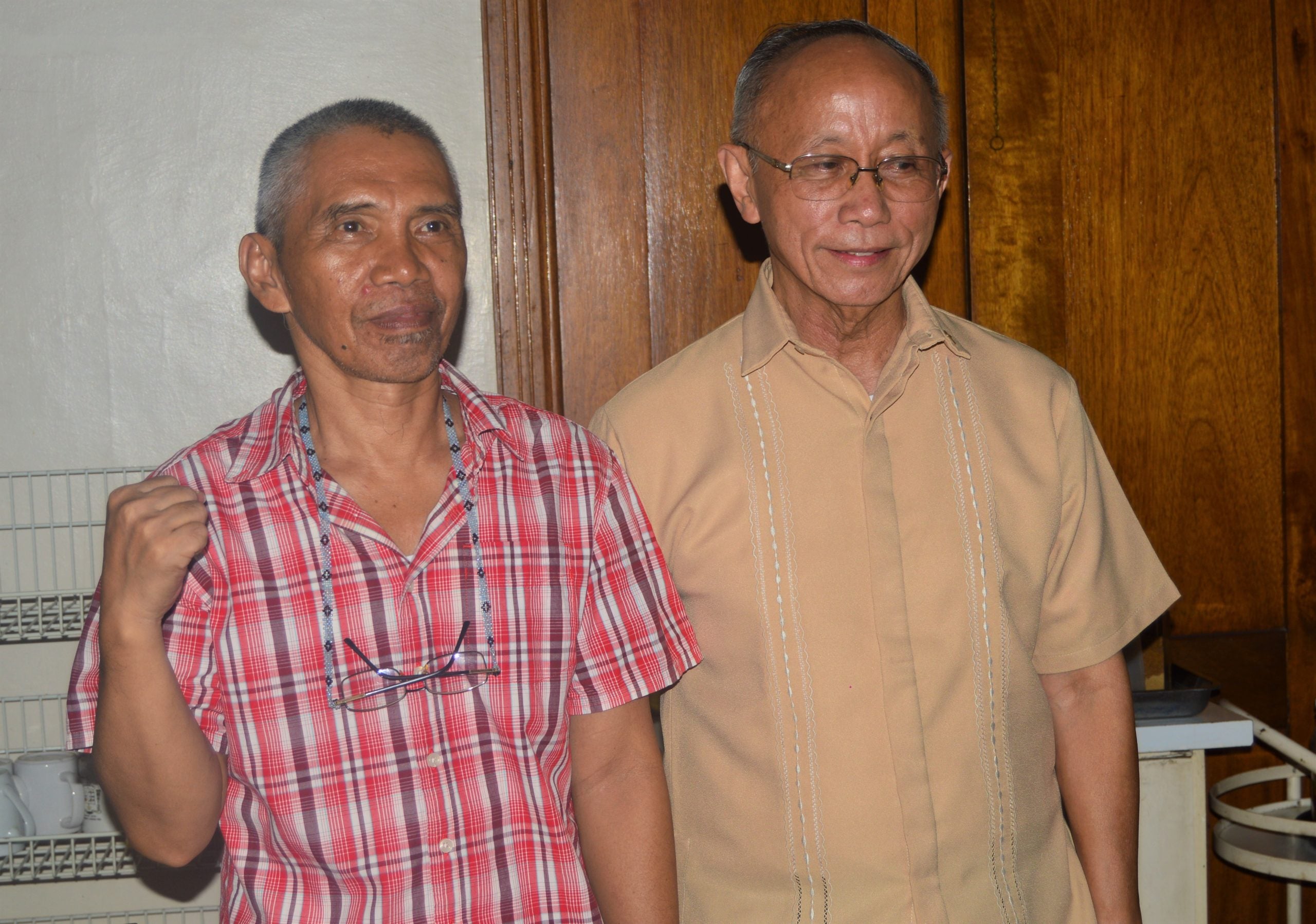 Former peace talk consultant Alfredo Mapano (left) pays a visit to Archbishop Antonio Ledesma, then the head of the archdiocese of Cagayan de Oro, after his release from prison in 2016. JIGGER J. JERUSALEM

CAGAYAN DE ORO CITY—A group of Christian church leaders advocating for peace is questioning the arrest of Alfredo Mapano, former peace talk consultant of National Democratic Front of the Philippines (NDFP), while he was at work in a government corporation in Misamis Oriental province.

“Is the government program of national reconciliation and rebel reintegration all for show?” said Philippine Ecumenical Peace Platform (PEPP) in a statement.

It said the case of Mapano cast doubt on the sincerity of the government’s call for rebels to lay down their arms and return to the fold of the law.

Mapano, who had been working at the Phividec Industrial Authority in Tagoloan, Misamis Oriental, was arrested by a police team from Bayugan town, Agusan del Sur province last Nov. 27 for a case of robbery in band.

Mapano had served seven years at the Misamis Oriental provincial jail until 2016, when he was freed on bail to serve as consultant in peace talks between the government and NDFP.

At Phividec, he worked first as a corporate social responsibility officer tasked with dealing with informal settlers within the 3,000-hectare industrial estate that hosted big corporations like SMB Brewery, power plants and international ports. He became security officer after that.

PEPP said “while leading a normal life with his family,” Mapano also spent time as “active partner in the government program for national reconciliation” and spoke in different forums on peace.

On several occasions, Mapano quietly facilitated the assimilation of former rebels in society and helped those who are threatened, PEPP said.

The bishops said at the time of the supposed crime committed by Mapano in Agusan del Sur and Bukidnon provinces in 2017 and 2019, he was already working in Phividec.

“It is mind boggling to think that he could be in these far-away places while working in a government office,” PEPP said.

“We view with alarm and concern that Alfredo Mapano, a former peace negotiator and now a rebel-returnee, government employee and active partner of the government program, has become a victim of the government’s hollow promise,” it said.

“Instead of the promised ‘peaceful return to the fold,’ he is once again subjected to political persecution with these latest trumped-up charges filed against him,” PEPP said.

“We urge the government to abide by its promise to accept our rebel brothers and sisters who have decided to return to the fold of the law and offer them a chance to lead a peaceful life and contribute to peace-building,” the group said.

Peace cannot be achieved when even those who have given up violence and have chosen to work for peace are still politically persecuted, the bishops added.