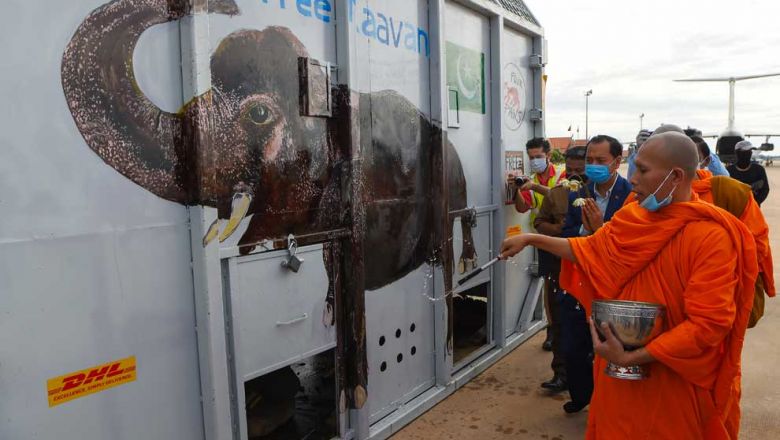 A Buddhist monk sprinkles holy water around the crate containing Kaavan the Asian elephant upon his arrival in Cambodia from Pakistan at Siem Reap International Airport on Monday. AFP

PHNOM PENH — The world’s loneliest male elephant, Kaavan, arrived at the Siem Reap International Airport from Pakistan at 2:30pm on November 30, according to a spokesman for the Ministry of Environment.

Environment ministry spokesman Neth Pheaktra told The Post the transfer of Kaavan, who was in the Marghazar Zoo in Islamabad for 35 years, was coordinated between the Pakistani government and the Convention on International Trade in Endangered Species of Wild Fauna and Flora (CITES).

The Ministry of Agriculture, Forestry and Fisheries and the Cambodia Wildlife Sanctuary (CWS) also helped bring him to Cambodia.

“We will keep Kaavan until he gets familiar with Cambodia’s forest, then we will release him to the forest. We hope Kaavan is happy with the wildlife sanctuary,” he said.

The wildlife sanctuary area in Oddar Meanchey province covers an area of more than 100,000ha and is rich in dense forest and rainforest, as well as valleys and water sources ideal for Asian elephants, according to provincial environment department director Phuong Lina.

Lina told The Post that Kaavan will be relocated to a new location prepared by the CWS in collaboration with the environment ministry. The new site is enclosed by concrete pillars with zinc barriers spaced about 1m apart.

“The site is a temporary residence for Kaavan to adapt to the geography and forestry of Cambodia before being released into the wild,” he said.

According to Lina, officials also arranged three female elephants (domestic elephants), two of which are still viable, which are expected to help release Kaavan’s loneliness.

“I hope Kaavan will have a better life when he meets the female elephants,” he said.

He will be released with the three to live his natural life on 4,000ha of Kulen Promtep’s dense forest cover.

Before arriving in Cambodia, Sri Lanka-born Kaavan was given as a gift to Pakistan in 1985. Since 1990, he shared his life at the Marghazar Zoo with a female elephant called Saheli who died in 2012. He has since been living alone.

A court in Islamabad ordered the closure of Marghazar Zoo in May and the Islamabad Wildlife Management Board (IWMB) decided to give Kaavan to Cambodia.

Cambodia has between 400 and 600 Asian elephants living in the Cardamom Nature Reserve and in the northeastern part of the country including Mondulkiri and Ratanakkiri provinces, according to Pheaktra.

Hunting in the last 30 years, however, has reduced the population. The level of hunting has dropped significantly in the last 10 years due to the intervention of law enforcement.