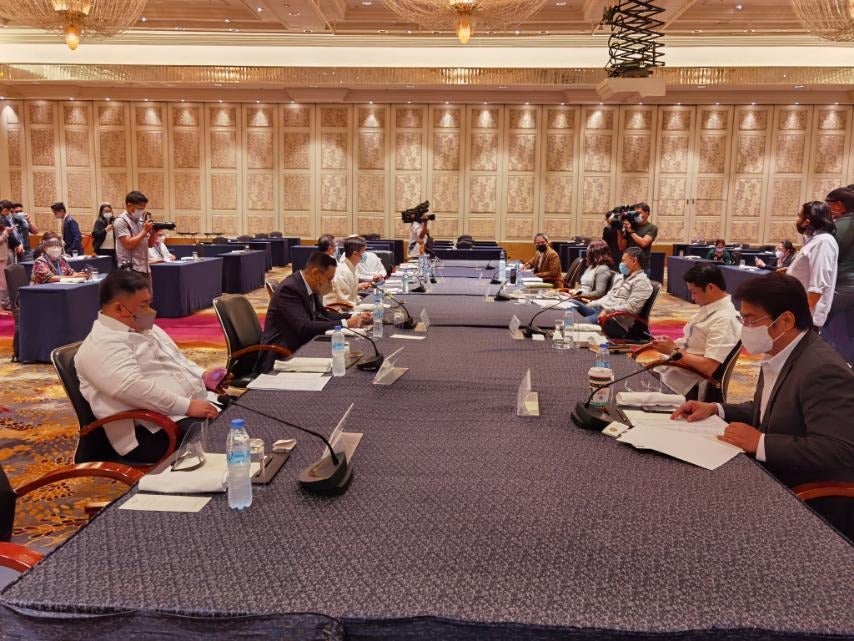 The Senate and the House of Representatives on Tuesday, Dec. 1, 2020, begin bicameral deliberations on the proposed 2021 national budget. Photo courtesy of the Office of Senator Sonny Angara

MANILA, Philippines — The Senate and the House of Representatives on Tuesday began bicameral deliberations on the proposed P4.5-trillion national budget for 2021.

The bicameral conference committee, which will be conducted in a “hybrid” set up in observance of health and safety protocols, aims to reconcile the Senate and House versions of the budget bill.

The Senate approved its version last Nov. 26 while the House passed theirs last Oct. 16.

For the side of the House, the 21-member panel will be chaired by appropriations committee chairman ACT-CIS party-list Rep. Eric Yap.

Joining him as vice-chairmen are Deputy Speakers Doy Leachon and Mikee Romero.

House Minority Leader Joseph Stephen Paduano will be the minority’s representative to the bicam.

Among allocations under the proposed budget is the funding for COVID-19 vaccine. The Senate version allocated a total of P83 billion for the procurement of the vaccines.

The Senate earmarked P8 billion for the procurement of COVID-19 vaccines and included P54 billion under the unprogrammed appropriations or standby funds for the purchase of the vaccines which will be released depending on the government’s revenue collections.

Another P21 billion is placed under the unprogrammed appropriations under the Senate version for the storage, transportation, and distribution costs of the vaccines.

The House, meanwhile, will push for a P5-billion increase in the 2021 budget’s calamity fund, Yap earlier told reporters in an online interview.

Yap also said that the House and the Senate are planning to finish bicameral discussions on the budget by Friday this week.

Read Next
China gave COVID-19 vaccine candidate to Kim Jong Un, US analyst says
EDITORS' PICK
New Year, New Rediscoveries
Acer Philippines welcomes you to its first flagship store
More than 150 National Guard in Washington for Biden inauguration test positive for coronavirus
Pope Francis to miss events due to new flare up of leg pain—Vatican
PNP’s Covid-19 cases jump to 9,809; 52 new infections logged
Is your company a growth champion? Stand up and be recognized!
MOST READ
Dustin Poirier knocks out Conor McGregor at UFC 257
Ellen DeGeneres, too, is baffled by viral Filipino soda ad
AFP to apologize to UP alum falsely included in list of NPA members — Lorenzana
WATCH: Alex Gonzaga joined by family in Amanpulo honeymoon
Don't miss out on the latest news and information.