Americans brace for COVID-19 ‘surge upon a surge’ 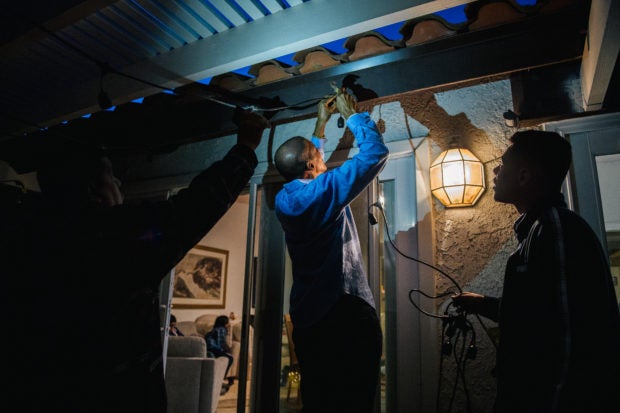 LOS ANGELES, CA – NOVEMBER 26: Dr. Christopher Broughton (C) and his family prepare for a gathering on November 26, 2020 in Los Angeles, California. Families have adjusted plans under CDC guidelines. “Not many people made it to Thanksgiving this year. I respect the CDC guidelines, and we have been following them with our own family practices. All year we have been fighting, social distancing, wearing masks and isolating. I wanted my family to feel rewarded for their efforts and rejoice together during this Thanksgiving – to remember that we should be in Thanksgiving everyday,” said Broughton. Due to the spike in COVID-19 cases, as of November 21, 2020, the state of California has required that all non-essential work and activities stop between 10PM and 5AM in counties across the state. Brandon Bell/Getty Images/AFP

WASHINGTON – America should prepare for a “surge upon a surge” in coronavirus cases as millions of travelers return home after the Thanksgiving holiday, top US scientist Anthony Fauci warned Sunday.

The United States is the worst-affected country, with 266,074 COVID-19 deaths, and President Donald Trump’s administration has issued conflicting messages on mask-wearing, travel and the danger posed by the virus.

“There almost certainly is going to be an uptick because of what has happened with the travel,” Fauci told CNN’s “State of the Union.”

Travel surrounding Thursday’s Thanksgiving holiday made this the busiest week in US airports since the pandemic began.

“We may see a surge upon a surge” in two or three weeks, Fauci added. “We don’t want to frighten people, but that’s the reality.”

The trend is ominous, Fauci and other government scientists said, with the Christmas holidays soon bringing more travel and family gatherings.

Deborah Birx, White House coronavirus response coordinator, noted a surge in COVID-19 after a holiday weekend in May.

“Now we’re entering this post-Thanksgiving surge with three, four and 10 times as much disease across the country,’ she told CBS’s “Face the Nation.”

“We are deeply worried.”

The US surgeon general, Jerome Adams, was equally blunt.

“I want to be straight with the American people,” he told “Fox News Sunday.” “It’s going to get worse over the next several weeks.”

Elsewhere, thousands of health workers marched in Madrid in support of the public health system in Spain, one of the European countries hardest hit by the pandemic.

And guards opened fire to quell a prison riot in Sri Lanka, where four inmates were killed while protesting a surge of coronavirus infections.

In France, the highest administrative court ordered the government to loosen rules allowing no more than 30 people at religious services, in the face of angry objections from church leaders.

Around 9,000 runners — some wearing face masks — took part in the Shanghai International Marathon, according to Chinese media, a mass-participation sports event rare during the pandemic.

And New York City again took a small step back toward normality, as Mayor Bill de Blasio announced that elementary schools would reopen for in-person instruction on December 7. The US news media, meantime, reported that first shipments of the Pfizer vaccine against COVID-19 — one of the first to claim high effectiveness, along with a Moderna product — had arrived in the United States from a Pfizer lab in Belgium.

Pfizer was using charter flights to pre-position vaccine for quick distribution once it receives US emergency authorization — expected as early as December 10 — the Wall Street Journal and other media reported.

The Pfizer and Moderna vaccines, both said to be safe and perhaps 95 percent effective, have introduced a glimmer of hope after months of gloomy news.

“This is the way we get out of the pandemic. The light is at the end of the tunnel,” Admiral Brett Giroir, the US official overseeing coronavirus testing, told CNN.

But like Fauci and the other scientists, he expressed grave concerns about the months immediately ahead.

“About 20 percent of all people in the hospital have COVID, so this is a really dangerous time,” Giroir said.

Until large numbers of Americans have been vaccinated — Giroir said half the eligible population might be by March — much will still depend on people taking precautions, including mask-wearing and distancing, he and Fauci said.

Giroir said it might take until the second or third quarter of next year for most Americans to be vaccinated, but that substantial benefits would accrue much sooner.

By first vaccinating those at highest risk, he said, “we can absolutely get 80 percent of the benefit of the vaccine by only immunizing a few percent of the population.”

Adams, the US surgeon general also expressed cautious optimism, saying, “We are mere weeks away from starting to vaccinate the vulnerable, and we can significantly protect people who are at risk for this virus.

“So hang on just a little bit longer.”

The novel coronavirus has killed at least 1,453,074 people worldwide since the outbreak emerged in China last December, according to a tally from official sources compiled by AFP at 1100 GMT on Sunday.

Germany, once a beacon of hope in Europe’s coronavirus nightmare, reached on Friday the mark of more than one million cases.

Read Next
Biden fractures foot playing with dog
EDITORS' PICK
Legarda emphasizes role of ICC/IPs in nation building this IP month
Climate Change Commission and Nestlé PH to discover sustainability-focused solutions
Biden vows to stand with Asia on freedom, hits at China on Taiwan
NCR’s COVID-9 alert level may be downgraded from 3 to 2 soon — DOH
FDA reviewing COVID-19 vaccines’ EUA for booster shots
What’s at stake for every fighter at ONE: NextGen
MOST READ
Drivers now required to take driver’s education upon license renewal – LTO
Gordon to Duterte: You? Teaching me courtesy?
Marcos Jr’s ‘special diploma’ from Oxford: You can have it, too
Can Marcos Jr. be disqualified?
Don't miss out on the latest news and information.