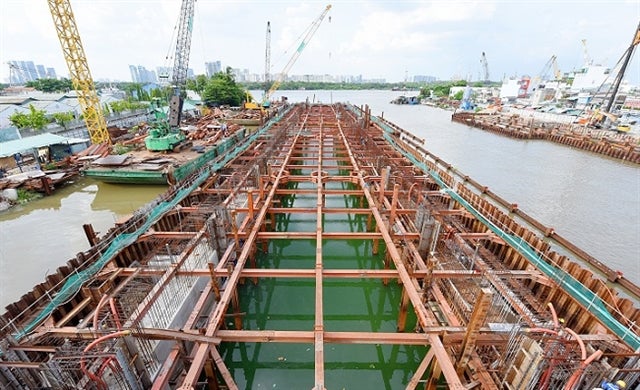 HCM CITY — Ho Chi Minh City will assess the relationship between the factors that cause climate change and its socio-economic plans to develop long-term responses.

Nguyễn Thị Thanh Mỹ, deputy director of the city Department of Natural Resources and Environment, elaborated on the task at a recent meeting held to review implementation of climate change response plans over the last four years and set out orientations and tasks for the next decade.

All sectors and government agencies at all levels would need to join hands to find an effective approach to respond to the challenges of climate change and implement the city’s green-growth strategy, she said.

According to Mai Tuấn Anh, head of the department’s meteorology, hydrology and climate change division, the city’s responses to the challenges posed by climate change have enjoyed positive results in the last four years.

Research into and assessment of the impacts of climate change on natural, human and socio-economic factors have been implemented effectively thanks to a new methodology for building local climate change scenarios by the Ministry of Natural Resources and Environment, he said.

“That helps the city … develop solutions to mitigate the impacts of climate change.”

The Department of Industry and Trade has built models for energy monitoring and management that ensure no energy is wasted in the industrial sector that uses over six million kilowatt-hours a year.

The department subsidizes the training of personnel at key industrial facilities in energy management.

It also organizes seminars and propagates the adoption of energy consumption norms for the steel, plastic and chemical industries to help them clearly understand the laws on efficient use of energy and the benefits of energy saving.

To mitigate the impacts of flooding caused by heavy rains and high river tides, the city has invested in a number of tidal flood-control works like building sluices and dykes and dredging canals.

There are now only 22 flood-prone points in the city, down from 127 three years ago. The flooding also lasts shorter — for only 15-40 minutes after the rains stop — and is only 0.1-0.3 meters in depth.

The city has made plans to draw water from Dầu Tiếng and Trị An reservoirs to ensure there is enough for people facing water shortages caused by climate change.

The People’s Committee has been implementing a plan on household solid waste classification at source since 2017, and people are gradually getting into the habit of separating their wastes before dumping them, making recycling and treatment easier.

The city has invested in infrastructure, replacing rudimentary vehicles with modern garbage trucks and using advanced technologies to treat waste.

It has also invested in sanitary landfills and solid waste treatment plants that convert waste into electricity and generate by-products that can be recycled for compost and help reuse plastic waste.

The Department of Transport is working to diversify fuels, develop infrastructure for clean and renewable energy and promote the use of vehicles that use clean and environment-friendly fuels such as CNG, LPG and electricity.

This has helped gradually replace traditional fuels such as petrol, save energy and reduce pollution and greenhouse gas emissions.

But Anh admitted there remained challenges in formulating a response to climate change.

For instance, data from studies and investigations on the effects of climate change was insufficient in terms of both quality and quantity for developing a comprehensive and effective response, he said.

“Propaganda and dissemination of information to improve public awareness have not been successful in mobilizing the business community to participate in climate-change responses,” he added.

An official from the Department of Agriculture and Rural Development said the city should seek the collection of used bottles and packages that contained plant protection substances for proper disposal.

They should not be burnt or discarded indiscriminately since they could release toxic gases, he said.

It was necessary to encourage farmers not to burn straw after harvesting rice to reduce greenhouse gas emissions, and instead use it to grow mushrooms and as animal feed.

People living in places affected by climate change should select plants that adapt to salinity and have a short growth period, he added.

The Department of Construction said it would promote the use of unburnt and other environment-friendly building materials for construction.

It would regularly check standards, procedures and technical regulations for the treatment and consumption of ash, slag and gypsum discharged from thermal power plants, chemical and fertilizer plants and gypsum factories.