A Quezon City Regional Trial Court (RTC) on Friday found communist rebel couple Benito and Wilma Tiamzon guilty of kidnapping and serious illegal detention for holding an Army officer captive for more than two months 32 years ago. They were sentenced to up to 40 years in prison.

In an 18-page decision, Judge Alfonso Ruiz II of the Quezon City RTC Branch 216, also ordered the couple, who had served as consultants for the National Democratic Front of the Philippines (NDFP) in peace talks with the Duterte government, to pay the now retired officer, Abraham Claro Casis, P255,000 in moral and exemplary damages, and civil indemnity.

Following a motion from the prosecution, the court had ruled that due to the couple’s failure to attend hearings since 2018 they had waived their right to present evidence.

Three other soldiers were held captive with Casis for 75 days by the New People’s Army (NPA) in Quezon province in 1988, but only Casis, then a lieutenant, filed a criminal complaint. Casis, who retired as a brigadier general in 2019, and the other soldiers were released by the late NPA leader Gregorio “Ka Roger” Rosal in August 1988.

The NPA is the armed wing of the Communist Party of the Philippines (CPP), which is leading the half-century-old insurgency.

The court said there was “no reason to disbelieve the testimony of the complainant considering that his narration of facts was straightforward, categorical and in accord with the natural course of things.”

It said “the credibility of the complainant is further strengthened by the lack of denial from the accused.”

Rachel Pastores, managing counsel of Public Interest Law Center which represented the couple, said that like other peace consultants, the Tiamzons were slapped with trumped-up charges.

“But [they] could not effectively defend themselves in court because they and their witnesses are constantly subjected to threats to their lives, harassment and surveillance. They could have easily presented evidence in their defense and dispute the clear lies of the lone prosecution witness, a high ranking member of the military,” she said in a statement. 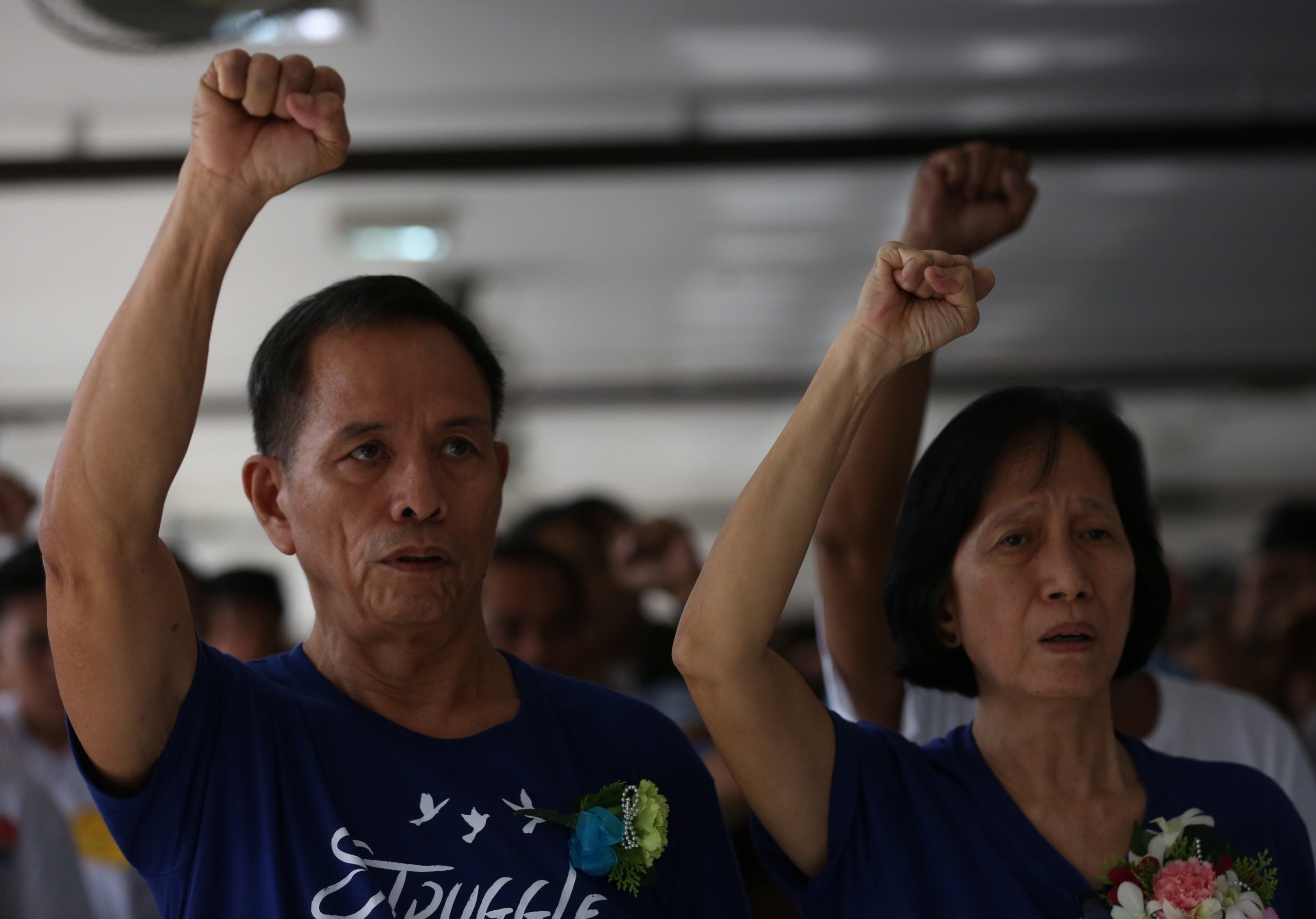 CONVICTED Communist rebel peace talks consultants Benito and Wilma Tiamzon display their militancy during a forum on the peace process in Pasig City on Sept. 23, 2016, a month after they were granted bail in a kidnapping case so they could join the talks. A Quezon City Regional Trial Court on Friday convicted them of kidnapping an Army officer in 1988 and sentenced them to 40 years in prison. —INQUIRER PHOTO

Before the decision was handed down by the court, the defense filed a manifestation on the serious threats against NDFP peace consultants, citing the assassination of two other consultants—Randall Echanis and Randy Malayao.

“The vilification of the Tiamzons, led by the President himself, has constricted their space for remedy or relief at this time. Given the present factual milieu, the Tiamzons, along with other peace consultants facing false charges in court, cannot avail of fair trial,” Pastores said.

The military called the conviction of the Tiamzon couple a “victory” against the NPA.

Maj. Gen. Edgard Arevalo, spokesperson for the Armed Forces of the Philippines, said the military would continue to strengthen its resolve to bring other similar “criminals” to justice “in honor of the victims of the violence” by the rebels.

“The many victims of NPA atrocities and the Armed Forces of the Philippines rejoice with the conviction of two top NPA leaders and CPP Central Committee members Benito and Wilma Tiamzon,” Arevalo said in a statement.

He added that the military “will continue to hunt them down.”

Presidential spokesperson Harry Roque said the court’s decision was a “triumph of the justice system.”

“The long arm of the law has finally caught up with the Tiamzon couple,” Roque said. “It clearly shows that the wheels of justice continue to grind.”

Casis told the court that during his detention by the rebels, he saw the Tiamzon couple and Rosal holding meetings.

“They belong to the core group. I would see them holding meetings and implementing orders that they said came from the top,” Casis testified.

The Tiamzons were arrested at a police-military checkpoint in Aloguinsan town in Cebu province in March 2014 and were held on charges of illegal possession of firearms, explosives and incendiary devices.

They were arraigned on the kidnapping charges on April 8, 2014, but refused to enter a plea.

The Tiamzons were granted bail in August 2016 to allow them to participate in the peace talks in Norway. In November 2017, President Duterte terminated the talks with the rebels.

Less than two months later, in January 2018, a Manila court, citing the termination of the talks, ordered the rearrest of the couple, who had gone into hiding.

In March 2018, the Tiamzons were included on a list of about 600 individuals the government had petitioned a Manila court to be declared as terrorists, along with the CPP-NPA.

The Tiamzons are also facing murder and frustrated murder charges plus other kidnapping and serious illegal detention cases.

Ruiz added that Casis was presented with multiple photos, not just of the couple. —WITH REPORTS FROM PATRICIA DENISE M. CHIU, LEILA B. SALAVERRIA AND INQUIRER RESEARCH