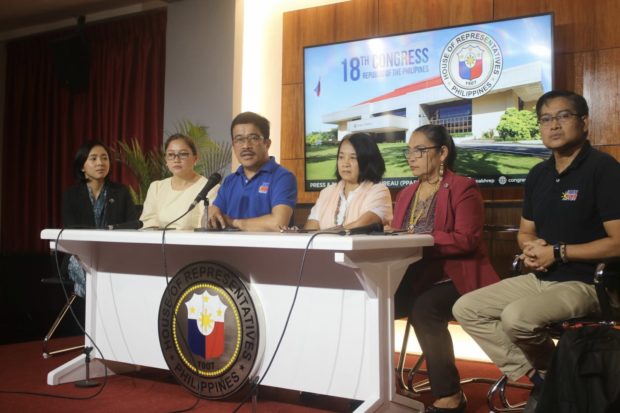 MANILA, Philippines — Lawmakers from the House of Representatives’ Makabayan bloc again insist that they are neither ranking members of the Communist Party of the Philippines and New People’s Army (CPP-NPA), nor do they recruit people to become communist fighters.

In the latest joint statement from the lawmakers, they refute the National Task Force to End Local Communist Armed Conflict (NTF-ELCAC) assertions that they are officials of the CPP-NPA — just after they clarify matters on a Senate hearing on red-tagging.

During the hearing, National Security Adviser Hermogenes Esperon Jr. maintained his claim that CPP-NPA and the National Democratic Front of the Philippines (NDFP) maintain legal fronts — including those the party-lists in Congress.

During the hearing, several activist leaders including Bayan Muna Rep. Carlos Zarate — a member of the Makabayan bloc — rebutted Esperon’s claims by stressing that they are in Congress because they believe in the parliamentary struggle and not in armed struggle, which is being used by the NPA.

However, Zarate and former Bayan Muna congressman Teddy Casiño remained firm that they could not condemn the decision of some to take up arms and rebel against the government, because the cause of the rebellion are seated in legitimate issues.

While Makabayan has drawn flak from Esperon and Senator Panfilo Lacson for not denying or condemning the actions of CPP-NPA, the lawmakers insisted that calling revolutionaries as “enemies of the state” would be tantamount to denying the rebels of a chance to settle issues under peace negotiations.

The bloc, which is composed of Bayan Muna, Gabriela Women’s party-list, Kabataan party-list, and Alliance of Concerned Teachers party-list, reason out that their decision not to condemn CPP-NPA’s actions should not be taken as a hint that they agree with their methods, or that they provide assistance.

Red-tagging became a hot topic after NTF-ELCAC member and Southern Luzon Command chief Lt. Gen. Antonio Parlade Jr. advised actress Liza Soberano to avoid being associated with Gabriela, as it is allegedly a communist front — even asking government supporters not to red-tag her as she is not yet an NPA member.

Parlade’s warning drew criticism for supposedly mansplaining — or explaining things to women in a condescending manner.  But he insisted that he was merely giving an advice, and was not red-tagging the actress.