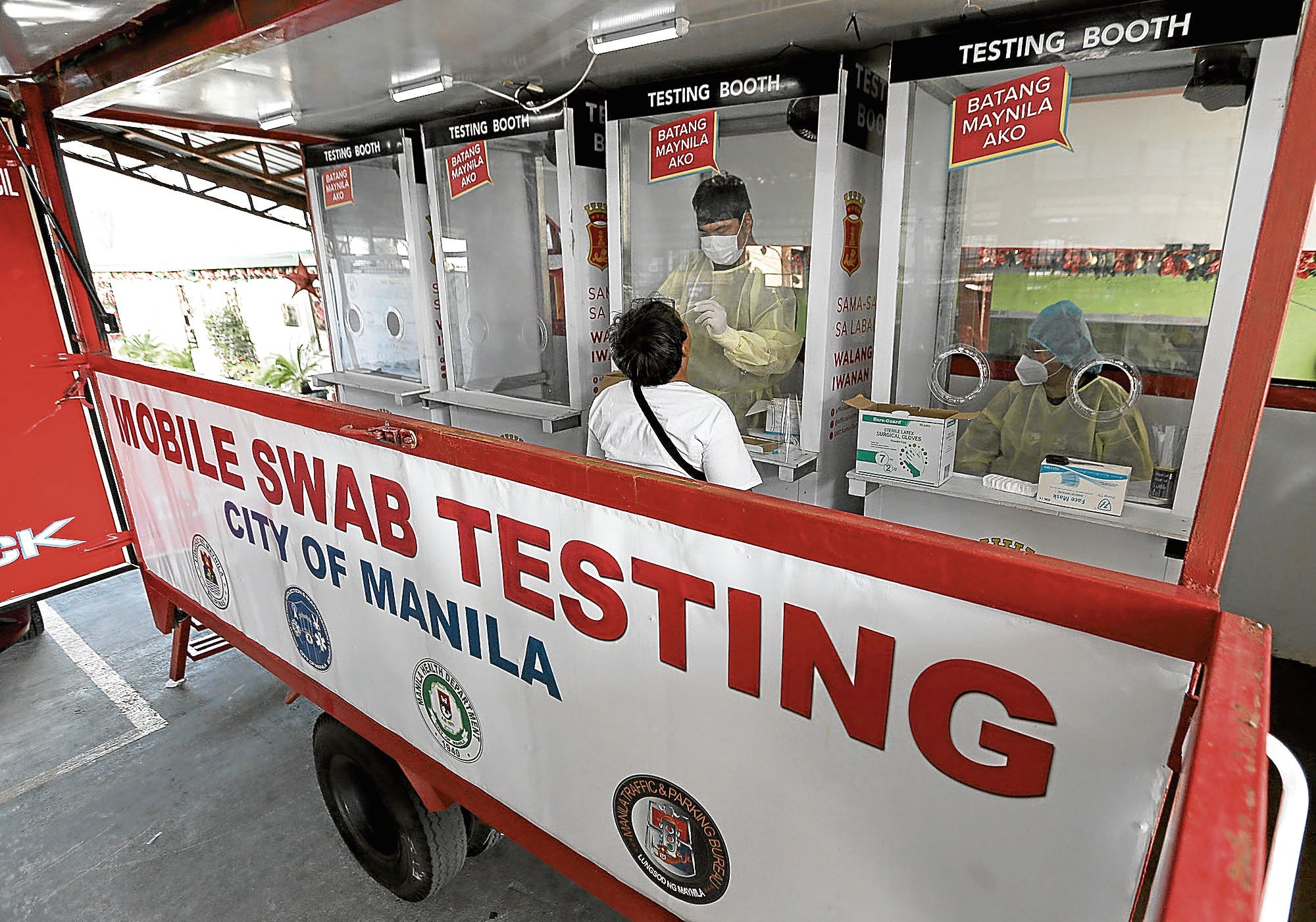 TOO LITTLE FUNDING Tricycle and jeepney drivers are tested for the coronavirus as part of Manila’s mobile free testing in Sampaloc district. Marikina Rep. Stella Quimbo is pushing for a bigger funding for the government’s COVID-19 response, lamenting the P413 billion earmarked for the pandemic fight in 2021. —RICHARD A. REYES

The country’s economic losses from the coronavirus pandemic and a string of devastating typhoons this year are likely to reach P3.4 trillion, thus requiring a much more aggressive fiscal response from the government in 2021, an economist and lawmaker said on Thursday.

Marikina Rep. Stella Quimbo, who is pushing for a third package of COVID-19 intervention measures or Bayanihan 3, told an economic briefing organized by Security Bank that the government’s pandemic-related spending for the coming year was estimated to total only P413 billion.

This is “way too small” compared to the economic damage suffered by the country this year, she said.

Quimbo said the P3.4-trillion economic loss factored in a 10 percent gross domestic product (GDP) contraction this year, the forgone 6 percent GDP economic growth that the country would have achieved if the pandemic did not happen, and close to P100 billion in damage from recent storms.

Based on a Department of Budget and Management (DBM) breakdown of expenditures for 2021, the COVID-19 stimulus measures were estimated to get P838.4 billion, Quimbo said.

She pointed out, however, that this DBM estimate already included P589.8 billion for various projects of the Department of Public Works and Highways (DPWH), which should not be considered part of COVID-19 response because these had long been planned under the “Build, Build, Build” program.

About P31.4 billion was earmarked for the health sector, but Quimbo noted that this was still too small compared to the combined P80-billion health response under the Bayanihan 1 and 2, and especially considering that the government must spend for COVID-19 vaccines in 2021.

The proposed amount of P2.5 billion for vaccines, she noted, would cover only 3.9 million Filipinos.

Excluding the DPWH budget, Quimbo said this would leave the country with P248 billion for pandemic response in 2021. Including the P165 billion authorized spending under Bayanihan 2, she said the sum of P413 billion would still be way too small relative to the P3.4 trillion in economic damage.

Moving forward, Quimbo said the Philippines must “aspire for resilience,” and take a more proactive approach to bounce back from this pandemic, which highlighted gaps in the health sector.

“We lack beds. Our health-care workers are not cared for. Some of them are dying before even getting their benefits,” she said.

Based on Quimbo’s version of Bayanihan 3, P400 billion would be earmarked to boost pandemic and disaster response, as well as to build economic resilience.

The other proposed components are: P70 billion in subsidy for the hardest-hit households; P50 billion for the rehabilitation of typhoon-affected areas; P25-billion additional funding to procure COVID-19 vaccines; P30 billion in assistance for people who lost their jobs; and P5 billion in internet allowance for teachers and students.

“We must be vaccine-ready and the government must figure out requirements, and provide free vaccine for poor families,” she said.

In providing for the logistical and transportation requirements for COVID-19, Quimbo said the private sector would play a big role.

Further, she said the procurement process should allow the government to pay for imported vaccines in advance to ensure sufficient supply, now that every country in the world would line up to avail itself of these vaccines.