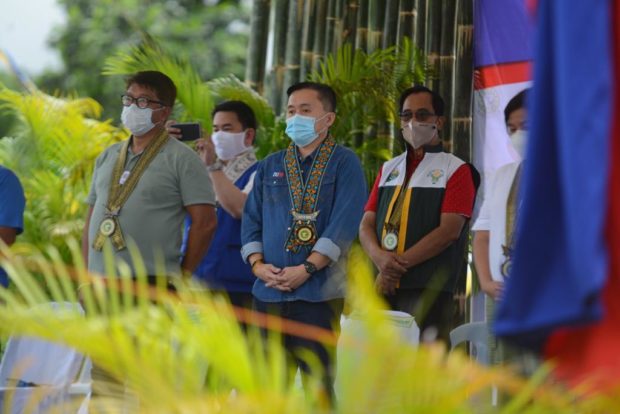 Sen. Bong Go in his visit to the local launch of the Balik Probinsya, Bagong Pag-asa (BP2) program at the Bagong Pag-asa Green Village in Kauswagan, Lanao del Norte on Nov. 24. Contributed photo

He joined General Manager Marcelino P. Escalada Jr. of the National Housing Authority, who also serves as the BP2 Council Executive Director, and other officials of BP2 partner agencies as well as local officials, in leading the ceremonial turnover of funds that will be used for housing assistance to BP2 beneficiaries. Model houses were also showcased during the activity.

(I am thankful for the local government of Lanao del Norte for welcoming our program aimed at helping our fellow Filipinos go back to their home provinces.)

According to the organizers, the six-hectare community will be dedicated to hosting returnees to Lanao del Norte who would qualify as beneficiaries of the BP2 program. Those expected to permanently resettle in the community are from Metro Manila, Cebu, and Davao.

Part of the community is dedicated to housing comprising of 25 quadruplex units allotted for the initial 100 BP2 beneficiary-families, which will be constructed by the NHA and will be equipped with basic services, like electricity and water supply. The rest of the land will be developed for crop and livestock production and processing.

The BP2 program is a comprehensive, multi-sectoral and whole-of-government initiative which seeks to decongest Metro Manila and enhance regional development by incentivizing residents and businesses to settle and invest in areas outside Metropolitan areas.

It places emphasis on four key result areas, namely: (1) the empowerment of local industries; (2) food security and agricultural productivity; (3) housing, social welfare, health, employment and human resource development; and (4) infrastructure development. Beneficiaries who are returning to their provinces can expect to receive assistance on transportation, housing and livelihood, among others, subject to assessment.

“The program will provide beneficiaries with new hope and a fresh start amidst the ongoing COVID-19 pandemic. However, let me be clear that it also aims to resolve more than just the issues encountered during the health crisis,” added the Senator.

“It will also address congestion, lack of decent living, criminality, poor sanitation as well as environmental degradation. It should be seen as a long-term solution with the intent of addressing perennial problems common in urban areas,” he explained further.

Presently, Lanao del Norte is one of five pilot provinces in which the program has been introduced, the others being Camarines Sur, Isabela, Leyte and Zamboanga del Norte. The program’s activities for Kauswagan will be implemented by the newly-established project management office (PMO) under the leadership of Kauswagan Mayor Rommel C. Arnado.

The PMO will serve as the primary management and coordination unit. The activities, however, will be developed and carried out in close collaboration with the national and regional BP2 Council and other relevant stakeholders at the regional and provincial levels of government.

On May 6 early this year, President Rodrigo Duterte signed Executive Order No. 114 which created the BP2 Council and institutionalized the BP2 program. According to the EO, the BP2 Program will bring “balanced regional development and equitable distribution of wealth, resources, and opportunities through policies and programs that boost countryside development and inclusive growth.”

The EO came about after Go authored Senate Resolution No. 380 urging the executive department to formulate and implement a program that aims to decongest Metro Manila and promote robust development in provinces.

At the height of more stringent COVID-19 quarantine measures, the BP2 program’s initial rollouts were suspended to give way to President Duterte’s directive to prioritize the Hatid Tulong initiative, a transportation assistance program which helps locally stranded individuals (LSIs) return to their provinces.

As of writing, a total of 101,532 applications have been filed with the BP2 program. They include 46,404 families and 2,540 stranded overseas Filipino workers. Of the total figure of applicants, 1,390 are seeking to return to Lanao del Norte.

(I can feel your commitment in making sure our program is successfully implemented. I just have one request: Do not abandon our fellow countrymen who are wanting to go back home to their provinces. Please make the words of our President happen, and that is to give Filipinos a new hope and a better life through this program.)

The senator, who serves as chair of the Senate Committee on Health, also announced the launch of a new Malasakit Center at the Kapatagan Provincial Hospital in the nearby town of Kapatagan in Lanao del Norte.

This is the 93rd Malasakit Center in the country. It brings under one office the government agencies from which Filipinos may conveniently seek medical assistance.

In his speech, Go once again reassured the public of the President’s commitment to prioritize the poor and vulnerable sectors once a vaccine against COVID-19 is available.

He also thanked the frontliners, specifically the members of the Armed Forces of the Philippines and Philippine National Police, who are helping lead the fight against the pandemic and other crises confronting the country, including the administration’s campaign against illegal drugs, criminality and corruption.

After the BP2 activity, Go joined the DSWD in their distribution of assistance to the poorest of the poor as identified by the LGU in the Covered Court of Kauswagan Central School. After which, he proceeded to Kapatagan in Lanao Del Norte to lead the distribution of various forms of assistance to 194 local market vendors before joining the launch of the newest Malasakit Center in Kapatagan Provincial Hospital.