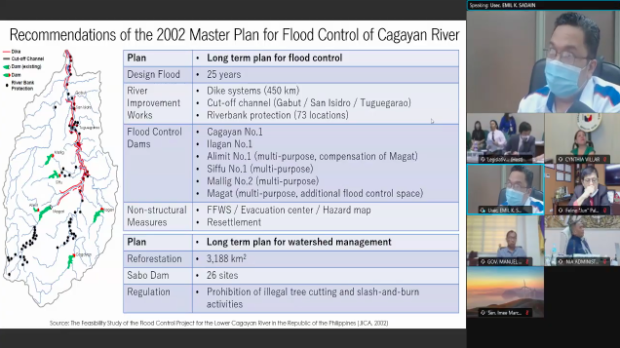 MANILA, Philippines — The Department of Public Works and Highways (DPWH) is proposing the construction of at least five more dams in the “mighty” Cagayan River to control flood water, especially during major typhoons.

Engr. Jerry Fano from the Unified Project Management Office Flood Control Management Cluster (UPMO-FCMC) of the DPWH, presented this proposal before a Senate hearing into the massive flooding in Luzon.

“Kailangan natin ng lima pa or anim to complement a good control of flood water that’s why we propose dams to be constructed as our long-term plan for flood control,” Fano said.

(We need about five or six more dams to complement a good control of flood water that’s why we propose dams to be constructed as our long-term plan for flood control.)

The proposal, according to him, is part of the DPWH’s long-term flood control plan.

Fano told senators that the Cagayan River has 20 tributaries, six of which are “major ones.”

However, he said that only one dam exists among the six.

“Isa lang po ang meron tayong controlling dam, which is the Magat Dam, that serves or at least controls the voluminous amount of flood water that goes into Cagayan River,” the DPWH official said.

(We only have one controlling dam, which is the Magat Dam, that serves or at least control the voluminous amount of flood water that goes into the Cagayan River.)

Of the six dams—one of which is already existing—two (Cagayan and Ilagan) would serve as flood control dam while the rest (Magat, Siffu, Mallig, Amilit) will be a multi-purpose dam “to serve as a hydro-electric irrigation and power supply dam.”

Following the flooding, some local government officials pointed their fingers at the decision of the National Irrigation Authority to discharge water from the Magat Dam, which they believe heavily contributed to the flooding in their areas.

But during an earlier hearing conducted by the House of Representatives on the same issue, NIA Administrator Ricardo Visaya said he does not believe NIA was a “major cause” of the flooding in the two provinces.