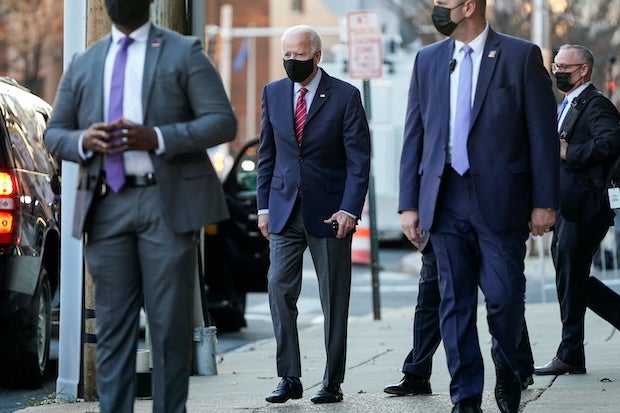 U.S. President-elect Joe Biden departs following a videoconference with members of the U.S Conference of Mayors at his transition headquarters in Wilmington, Delaware, Nov. 23, 2020. (Photo by JOSHUA ROBERTS / Reuters)

WILMINGTON, Delaware — U.S. President-elect Joe Biden focused on building his incoming administration and offered a message of healing on Tuesday as his transition team began contacting federal agencies to prepare for a handover of power in January from President Donald Trump.

The Democratic former vice president has been moving swiftly to build his team and make choices for his Cabinet after defeating the Republican incumbent in the Nov. 3 election. Trump has waged a flailing legal battle to try to overturn the results, falsely claiming that the election was stolen from him.

“The election is over. It’s time to put aside the partisanship and the rhetoric designed to demonize one another. We have to come together,” Biden said on Twitter on Tuesday.

Trump has said he will never concede the election but after weeks of limbo his administration on Monday finally gave the green light for the formal transfer of power to Biden to begin. Trump’s administration had held up the process, despite Biden emerging as the clear winner and world leaders recognizing him as the next president.

Monday’s announcement meant Biden will now have access to government funds and receive intelligence briefings as he prepares to take office on Jan. 20. One of the first departments his team reached out to was the Pentagon, underscoring the importance of emphasizing national security during the transition. Trump fired Defense Secretary Mark Esper on Nov. 9.

“In the days ahead, transition officials will begin meeting with federal officials to discuss the pandemic response, have a full accounting of our national security interests, and gain complete understanding of the Trump administration’s efforts to hollow out government agencies,” Yohannes Abraham, the executive director of the transition team, said in a statement.

Until now, the transition team had been restricted to talking to former officials rather than those currently in government, according to a Biden transition aide.

Critics have said Trump’s refusal to accept the results and approve the transition of power to Biden undermined U.S. democracy and undercut the incoming administration’s ability to combat the intensifying coronavirus pandemic that has killed about 258,000 Americans and left millions more without jobs.

In a small but symbolic move hours after the transition announcement on Monday night, Biden opened a “.gov” website available only to government agencies for his transition, launching buildbackbetter.gov.

Biden and Vice President-elect Kamala Harris are due to formally introduce their foreign policy and national security teams on Tuesday in Wilmington, Delaware. On Monday, the Biden team said it had tapped Antony Blinken to be U.S. secretary of state, Jake Sullivan as national security adviser, Linda Thomas-Greenfield as U.S. ambassador to the United Nations and Alejandro Mayorkas as secretary of homeland security.

Biden’s foreign policy is likely to focus on repairing Washington’s relationships with key U.S. allies in Europe and around the world and taking new paths on issues like climate change. He has pledged to rejoin a nuclear deal with Iran if Tehran restores its compliance, return to the Paris climate accord, reverse plans to leave the World Health Organization and end a U.S. rule that bans government funding of aid groups that discuss abortion.

Attention is also building on Biden’s possible pick to become treasury secretary, whose first task will be to steer the government’s response to the economic fallout of the pandemic.

Yellen, who would be the first woman to hold the job, is a seasoned economist and labor market expert respected by Congress and Wall Street. Her appointment would shift the department away from the tax cuts and easing of financial regulations that were the paramount focus under the Trump administration.

“While Dr. Yellen and I had our fair share of disagreements during her tenure as chair of the Federal Reserve, I have no doubts about her integrity or technical expertise,” Republican Senator Pat Toomey said in a statement.

Read Next
2 Koreans pretending to be spouses of Filipinos nabbed at Naia
EDITORS' PICK
Acer Philippines welcomes you to its first flagship store
Pope Francis to miss events due to new flare up of leg pain—Vatican
PNP’s Covid-19 cases jump to 9,809; 52 new infections logged
New Year, New Rediscoveries
Is your company a growth champion? Stand up and be recognized!
More than 150 National Guard in Washington for Biden inauguration test positive for coronavirus
MOST READ
AFP to apologize to UP alum falsely included in list of NPA members — Lorenzana
Former US envoy to PH Sung Kim appointed to State Department
Ellen DeGeneres, too, is baffled by viral Filipino soda ad
Tennis: Alex Eala claims first pro title
Don't miss out on the latest news and information.