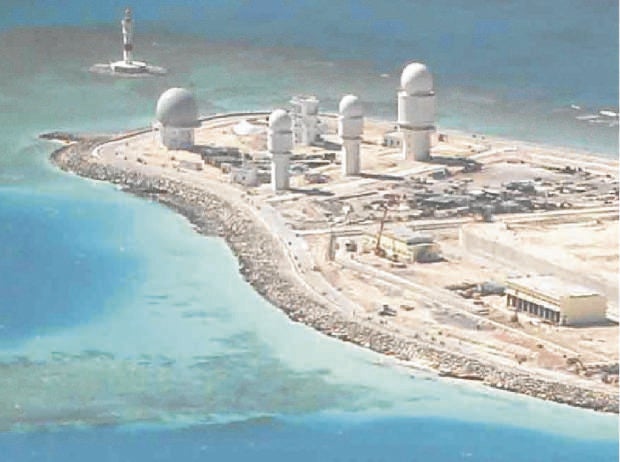 MADE BY CHINA This 2017 aerial photograph shows China transforming reefs claimed by the Philippines in the Spratlys into island fortresses.

China has accused US National Security Adviser Robert O’Brien of “sowing discord” between China and the Philippines over his remarks that “deliberately exaggerated regional tensions” during his visit to Manila on Monday.

“He blatantly accused China on no ground, grossly interfered in China’s internal affairs, deliberately exaggerated regional tensions and attempted to sow discord between China and the Philippines,” the embassy said in a statement late Monday night.

“We firmly oppose these remarks which are full of Cold War mentality and wantonly incite confrontation. It shows that his visit to this region is not to promote regional peace and stability, but to create chaos in the region in order to seek selfish interests of the US,” it added.

O’Brien, during his speech at the Department of Foreign Affairs on Monday, reiterated the United States’ support for the Philippines’ fight for control over the West Philippine Sea as he witnessed Washington’s donation of military equipment worth $18 million (about P868 million) to the Armed Forces of the Philippines.

“We stand with the Philippines in protecting your sovereign rights, your offshore resources and all those rights that are consisted with the international law,” O’Brien said.

The Philippines sealed a historic win against China before the United Nations-backed arbitral tribunal in The Hague in July 2016, which invalidated Beijing’s sweeping claims to almost all of the South China Sea.

The ruling recognized the Philippines’ sovereign rights in areas within its 200-nautical mile exclusive economic zone.

In the statement, the Chinese embassy scored the United States for allegedly interfering in the efforts of China and the Association of Southeast Asian Nations (Asean) to “peacefully negotiate and manage disputes, and seriously undermined regional peace and stability.”

The embassy also stressed that the United States is not a party in the SCS disputes since it has refused to join the United Nations Convention on the Law of the Sea (Unclos).

It added that the United States “frequently sends warships and planes to the SCS on numerous occasions for military provocations,” and “goes as far as using the electronic codes of civil aviation planes of the Philippines and other regional countries to carry out espionage flights in the SCS.”

The embassy also accused the United States of being the “biggest driver of the militarization of the SCS” and “the most dangerous external factor endangering the peace and stability” in the contested waters.

The United States embassy in Manila had no immediate response to the charge. China also insisted the situation in the South China Sea “remains stable and is improving.”

China also urged the United States to “respect China’s territorial sovereignty and maritime rights and interests in the SCS.”

China’s claim to 90 percent of the South China Sea includes areas claimed by Brunei, Malaysia, the Philippines, Taiwan and Vietnam. An international tribunal in 2016 ruled that China’s expansive claim, based on its historical maps, is inconsistent with international law.—With a report from Reuters