Student keeps up with online classes while working in the street 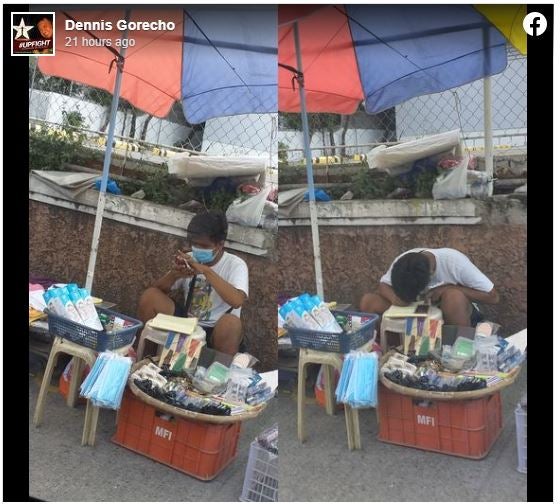 MANILA, Philippines — The sight of students juggling work and school has become part of the new normal during the pandemic.

“Freedom,” a second year physics major from the Polytechnic University of the Philippines (PUP), was recently seen attending his online classes while selling items along Evacom Road in Paranaque City.

I spotted this bagets along the evacom road in paranaque. He was doing online classes while selling stuff like face…

According to Dennis Gorecho’s post, Freedom was tending to his products while seemingly following lectures in his online class. The student was selling various items such as face masks, face shields, hair accessories, etc.

“I spotted this bagets along the [E]vacom road in [P]aranaque. He was doing online classes while selling stuff like face masks/ shields. His name is Freedom, a second year physics major from PUP. Good luck kiddo,” Gorecho said in his post.

Gorecho told INQUIRER.NET that he decided to share photos of Freedom “to inspire others na kahit ano status mo [sa buhay,] education must still be a priority.”

“Hope this kid will be one of our future scientists with a heart,” he shared.

Working students amid the pandemic

Freedom’s story is not new. In the past months, several posts surfaced online showcasing stories of several students who are trying to adjust with online learning whilst spending time on streets to make money.

Recently, netizens praised a college student who works as a delivery service driver during his free time.

The 21-year-old communications student at Adamson University was identified as Ax Valerio. Photos of Valerio, attending his online classes while sitting on his motorbike, circulated online last September.

The photos were taken by netizen Christian Lorenz Nuñez. The post garnered more than 9,600 reactions and more than 71,000 shares.

The vendor, Julius Barbosa, was seen studying while taking a break from selling balut. Barbosa is a Grade 10 student at the Victorias City National High School.

The post by Vanessa Belonio gained more than 8,300 reactions and more than 9,400 shares.

Despite the aim of an online learning system to ensure the safety of the students during the pandemic, there are still students like Freedom who have no choice but to spend time in the streets while studying.