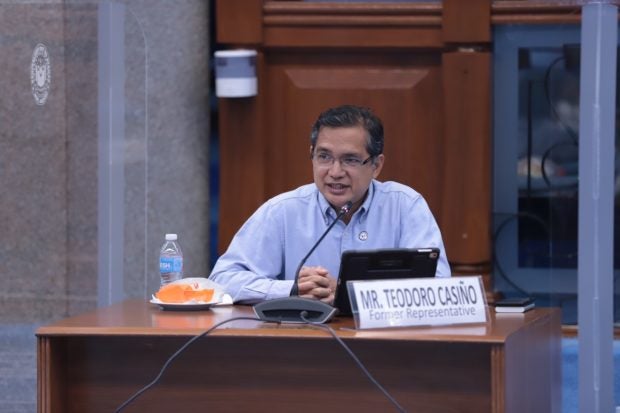 MANILA, Philippines — Over 300 activists and civilians have been killed, while over 2,500 have been “illegally arrested” in line with the government’s counter-insurgency operations, a former lawmaker said Tuesday during a Senate probe on red-tagging by military officials.

With these figures, former Bayan Muna party-list Rep. Teddy Casiño claimed that there is “chilling effect” in red-tagging, saying it “kills democratic participation and healthy debate on issues of public concern.”

(If you are red-tagged, of course you will become a target, you will be scared and you will opt to become silent. Red tagging is guilt by association with our accusers playing the role of judge, jury and executioner.)

“Meanwhile, 2,596 have been illegally arrested and 973 arrested and detained, many on questionable grounds, with the arresting police or military unit routinely planting evidence to make it appear that they are armed combatants,” he added.

He said this number includes 57 arrested in a “crackdown” on the offices of Bayan, Kilusang Mayo Uno, Gabriela and National Federation of Sugar Workers in Bacolod City in October 2019.

“Also arrested that day were three activists in the Bayan Manila office, including Reina Mae Nasino, who was denied the right to care for her baby River until she died,” Casiño added.

He also said that red-tagging is not only aimed to silence dissent and to discourage people’s participation.

“It is also part of the military’s psy-war operations to demonize, terrorize, neutralize and kill suspected insurgents,” he said.

(The problem is the victims are not armed civilians but us because we are easier to target.)

The former lawmaker was earlier tagged by Jeffrey Celiz, who claimed he was a former communist rebel, in the Nov. 3 hearing on the red-tagging as being a member of the CPP during the time that the former congressman was the head of College Editors Guild of the Philippines (CEGP).

Casiño reiterated his denial against such accusations.

“Isa po akong aktibista. Kumikilos po ako sa ligal at parliamentong pakikibaka para sa panlipunan at demokratikong reporma. I pursuing my advocacies – be it higher wages for workers, climate justice, or lower power rates – I have always worked within the bounds of the Constitution and our laws,” he said.

“I am not engaged in the armed struggle, I do not support or espouse the violent overthrow of the state, and I do not recruit for the New People’s Army or any armed group. Hindi po ako rebelde. Hindi po ako terorista. At hindi po ako front ng mga rebelde o terorista. Ako po ay isang aktibista,” he added.

(I am not engaged in the armed struggle, I do not support or espouse the violent overthrow of the state, and I do not recruit for the New People’s Army or any armed group. Hindi po ako rebelde. Hindi po ako terorista. I am not a rebel. I am not a terrorist. I am not a front for rebels or terrorists. I am an activist.)