The killing of Niño Luegi Hernando (riding the light green motorcycle) on Oct. 9, 2020. From Valenzuela PNP

MANILA, Philippines — The killing of a company messenger in Valenzuela City is now considered a case solved with the indictment of six suspects, including a police corporal and another dismissed policeman, Philippine National Police (PNP) chief Gen. Debold Sinas said Monday. 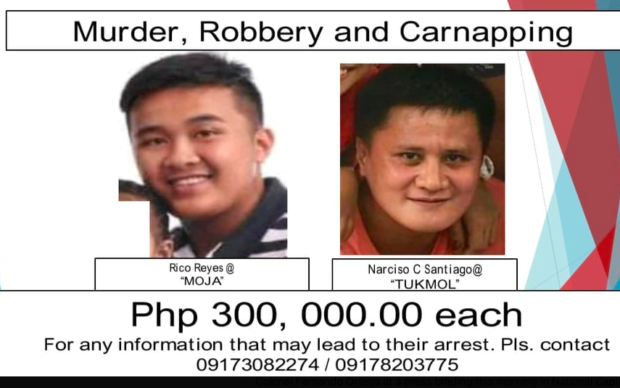 Ortega said they are the suspects in the killing of Niño Luegi Hernando, who was shot on October 9 and robbed of over P440,000 cash he was carrying and the motorcycle he was riding during the incident. Two of the suspects were riding a motorcycle when they attacked the victim.

Ortega identified Reyes as the alleged gunman and Santiago as the driver of the motorcycle that was used in the crime.

According to Ortega, a criminal complaint was filed before the City Prosecutor’s Office for the crime of murder, robbery, and carnapping. However, after appreciation of facts and evidence, the city prosecutor filed information to the court for a case of robbery with homicide and carnapping with no bail recommended.

Warrants of arrest were released for all the six suspects last Friday, according to the police official. With Zac Sarao, trainee

Read Next
‘No one can tell us to move on,’ Mangudadatu says 11 years after Maguindanao massacre
EDITORS' PICK
Pope Francis to miss events due to new flare up of leg pain—Vatican
More than 150 National Guard in Washington for Biden inauguration test positive for coronavirus
Is your company a growth champion? Stand up and be recognized!
Acer Philippines welcomes you to its first flagship store
New Year, New Rediscoveries
PNP’s Covid-19 cases jump to 9,809; 52 new infections logged
MOST READ
Former US envoy to PH Sung Kim appointed to State Department
Ellen DeGeneres, too, is baffled by viral Filipino soda ad
Dustin Poirier knocks out Conor McGregor at UFC 257
WATCH: Alex Gonzaga joined by family in Amanpulo honeymoon
Don't miss out on the latest news and information.