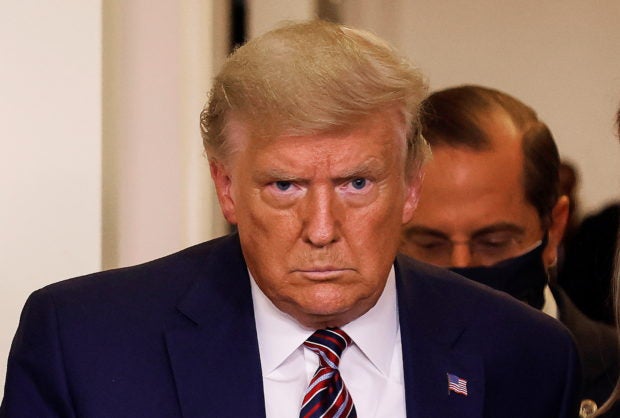 U.S. President Donald Trump is followed by HHS Secretary Alex Azar as he arrives to speak about prescription drug prices during an appearance in the Brady Press Briefing Room at the White House in Washington, U.S., November 20, 2020. REUTERS/Carlos Barria

U.S. President Donald Trump’s campaign on Sunday appealed part of a ruling that clears the way for the battleground state of Pennsylvania to certify Democratic President-elect Joe Biden as the winner of the November 3 election.

In a court filing, the campaign asked the U.S. 3rd Circuit Court of Appeals to review a decision by U.S. District Judge Matthew Brann.

The campaign filed a suit earlier this month, asking Brann to halt the state from certifying the results.

Brann’s ruling, issued on Saturday, described the case as based on “strained legal arguments” and “speculative accusations.”

In a court filing, the Trump campaign said it was focusing its appeal on the “narrow” question of whether Brann improperly refused to let them amend their lawsuit a second time.

For Trump to have any hope of overturning the election, he needs to reverse the outcome in Pennsylvania, which is expected to certify its election results on Monday.

Brann had denied a request by the campaign to add back allegations it dropped from the case, including a claim that its due process rights were violated.

‘No authority’ to block votes

Under Pennsylvania law, the candidate who wins the popular vote in the state gets all the state’s electoral votes.

Trump’s lawyer Rudy Giuliani said Saturday that Brann’s quick ruling would help them get the case “expeditiously to the U.S. Supreme Court.”

The lawsuit before Brann was filed on Nov. 9 and had alleged inconsistent treatment by county election officials of mail-in ballots. Some counties notified voters that they could fix minor defects such as missing “secrecy envelopes” while others did not.

Brann said in his decision that he had “no authority to take away the right to vote of even a single person, let alone millions of citizens.”

Brann, nominated by former President Barack Obama, is a Republican and, according to his biography, a member of the Federalist Society, a group of conservative and libertarian lawyers, law students, and scholars.

The Trump campaign and its supporters have filed dozens of lawsuits in six closely contested states. The campaign’s only victories extended the Election Day voting hours at a handful of polling places in Nevada and set aside some provisional ballots in Pennsylvania, according to court records.

Attempts to thwart the certification of the election have failed in courts in Georgia, Michigan, and Arizona.