newsinfo / Headlines
Headlines
FIRST OF ITS KIND IN PH

In a makeshift classroom in Bukidnon province, Matigsalug children are huddled around tablets, viewing moving and talking images. They are learning to pronounce letters, write the alphabet and count — in their tribe’s language.

Installed in the tablets is the Matigsalug learning app, the first of its kind in the Philippines, developed by Smart Communications Inc. in partnership with educators, tribal leaders and local governments. The tablets are among the digital devices contained in a portable classroom kit called “School-in-a-Bag,” deployed to remote areas where there is little or no access to the internet.

The kit and the app are components of the #LearnSmart program, which is operated through the telco’s social outreach arm, PLDT-Smart Foundation.

To preserve their culture and traditions, the elders of indigenous peoples (IP) record their history and customs in a logbook for the next generations to read and learn from. With the youth drawn more to gadgets, the elders fear the traditions might be forgotten. 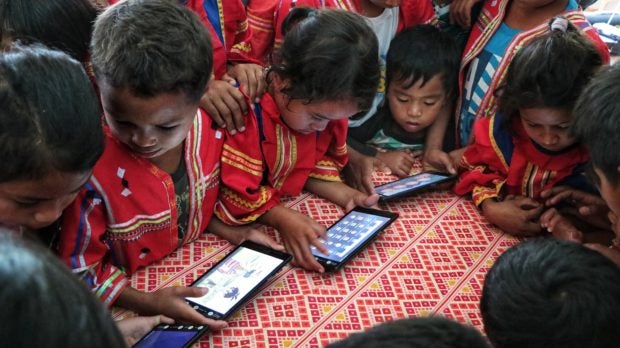 INCLUSIVE DEVELOPMENT Matigsalug children in Bukidnon province gather in a communal gadget area for a virtual class. Installed in the gadgets is an app that teaches them how to pronounce letters, write the alphabet, and count in Matigsalug. It is one of 10 mother tongue-based apps developed by Smart Communications Inc. in partnership with educators and local governments. —CONTRIBUTED PHOTO

Studies show that children learn better when the medium of instruction is their mother tongue, and also when they have access to digital tools and content. The problem in the Philippines is the lack of content. A study commissioned by Smart in 2013 on the potential of tablet technology as a means to improve literacy in kindergarten revealed that teachers resorted to “Tagalizing” English children’s programs to teach values.

Mindful that the United Nations’ 17 Sustainable Development Goals include quality education and support for IP communities, the telco brought together literature and technology experts who could develop and propagate use of interactive localized literacy apps for kindergarten to the third grade.

In 2018, it introduced the Matigsalug app.

The app’s interactive features teach word association and tribal songs, chants and dances, apart from the tribal alphabet and numbers. It ensures not only the preservation but also the youth’s understanding and appreciation of their culture, according to Datu Robert Siawan, a tribal elder.

Nine other literacy apps are now in use. The latest is Gnarè Blaan, which features an interactive alphabet, number exercises, educational games, and prayers of the Blaan tribe of Southern Mindanao.

An app especially developed for Bangsamoro children is Tahderiyyah, based on the Islamic kindergarten curriculum used in the region. It contains stories with Islamic values and expressions, besides the Arabic alphabet and number games.

Another Islamic app is Ta’allam (Arabic for “to learn”), which contains reading and counting exercises and Islamic prayers.

The other apps are Bahay Kubo (Filipino), Kaalam (Cebuano), Kaaram (Waray), Singsing (Kapampangan), Sanut (Ilokano) and Katao (Inabaknon, the Austronesian language spoken primarily in Capul, Northern Samar), all available for free on Google Play. Literacy apps for the Tagakaulo and T’boli tribes of Mindanao are also under way. —CONTRIBUTED