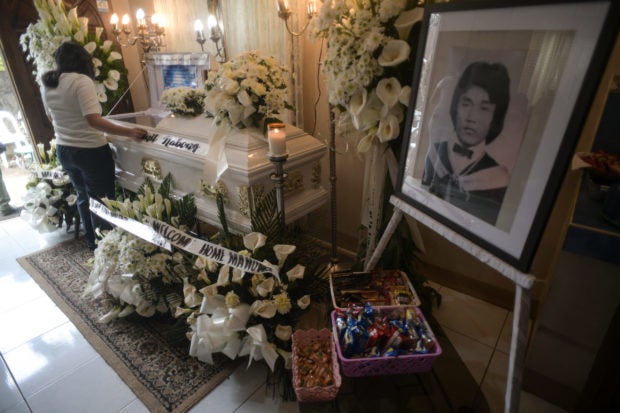 COMING HOME. The wake of communist guerrilla leader Leonido Nabong who was killed in Tampilisan, Zamboanga del Norte last Nov. 13. For his family in Tagoloan town, Misamis Oriental, who lost him to rebel movement in the 1970s, it was a homecoming. (Photo by FROILAN GALLARDO / Inquirer Mindanao)

TAGOLOAN, Misamis Oriental, Philippines — A slain ranking leader of the underground communist movement in Mindanao earned praises for standing up and dying for what he believed in.

Leonido Nabong (not Leonardo as earlier reported) was laid to rest at the Tagoloan cemetery Friday after his town mates, high school classmates, and former colleagues in the underground movement held a “parangal” to honor his life a day earlier.

He was hailed for a lifelong fight for social change, albeit through the dangerous road of armed revolution as a New People’s Army guerrilla.

Nabong, or better known for his nom de guerre Ka Charo or Otik, was killed in an encounter with Army troops in Tampilisan town, Zamboanga del Norte last Nov. 13.

During the “parangal,” stories of Nabong’s childhood, his life as a guerrilla, and how he died, were shared.

“He was the favorite of our parents because he was very intelligent. He always gets the biggest share of the food on the table, a gesture that Nido resents very much,” his younger sister Chona recalled.

His classmates at Xavier University sent flowers and in their Facebook posts expressed admiration for the difficult path he took to change society.

“I won’t forget him, and at the same time I will always know where he was,” Arthur Guerzon, Nabong’s best friend, said.

A classmate, Raymond Toledo, wrote: “To lay down one’s life for one’s principles and for the least of God’s brothers and sisters. Only a giant would be capable of such an act. The Xavier/ Ateneo community should honor him. Salamat kaayo (Thank you very much), Ka Charo.”

Because of COVID-19 restrictions, only a handful of Nabong’s former comrades attended the parangal.

In a wreath from the National Democratic Front, his former comrades described him as “the rock star of the guerrilla movement.”

“The children would be very excited when Ka Charo would come by our village. They always wanted to talk to him because he was always nice to them,” a former rebel said.

According to the former rebels, Nabong was reassigned from Misamis Oriental to Front Monterosa, a guerrilla base in Mount Malindang which straddles the boundaries of Misamis Occidental, Zamboanga del Norte and Zamboanga del Sur. This was after the peace talks in 1987 failed.

A former rebel who went to get his remains said Nabong was the only one killed in the 10-man NPA unit that the soldiers engaged in a battle in Barangay ZNAC, Tampilisan town.

He said Nabong was already suffering from arthritis and had to be attended to by a nurse.

“He could not run anymore. That is why I was not surprised he was the only casualty in his squad. He probably ordered everyone to leave him when the soldiers came,” he said.

He said they transferred the remains of Nabong from an ordinary coffin into a white coffin where he was cleaned and bathed.

In a white streamer on the white coffin, his family wrote: “Welcome home manong.”

Read Next
Palawan police chief sacked due to series of shootings
EDITORS' PICK
No. 1 smartphone brand realme Philippines, enters postpaid market with first 5G smartphone
WHO: Keep guard up even with COVID-19 vaccine nearing rollout
Legislators among those linked to corruption, says DOJ chief
Speed of COVID-19 vaccine development an extraordinary feat
Manufacturing heavyweights weigh in on post-pandemic transportation, logistics, and supply chain in Cisco Live Series
Smart celebrates the Season of Giving with GIGAMANIA
MOST READ
‘This is highway robbery:’ Valenzuela mayor shows traffic jam due to RFID payment system
Son of slain peace consultants has message to Sinas
PH going back to ECQ this Christmas season? IATF says it’s fake news
Is the US election democratic?
Don't miss out on the latest news and information.

Is the US election democratic?