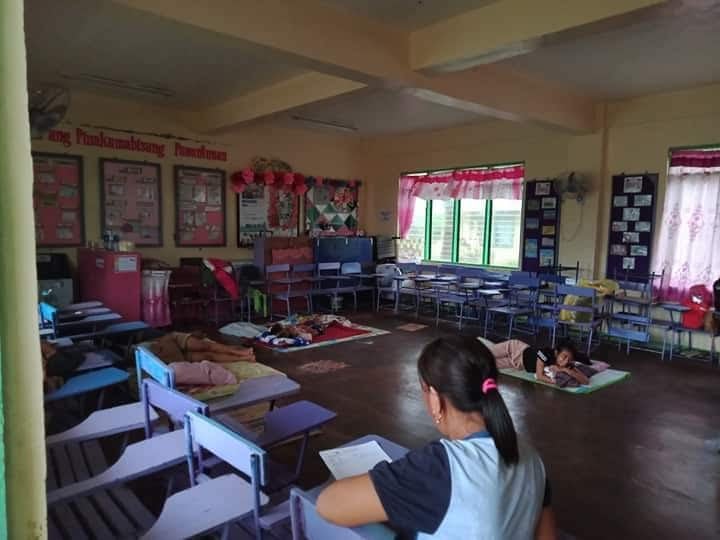 (File) Evacuees follow the physical distancing rule as a precaution against the spread of SARS-CoV-2, the virus that causes COVID-19 while inside evacuation centers where they stayed during the onslaught of typhoon Ambo. Photo by Rachel Arnaiz, Inquirer Visayas.

MANILA, Philippines — The government must make sure safeguards are in place to prevent corruption and delays when constructing evacuation centers, said Agap Banta, an advocacy group assisting in disaster preparedness amid the coronavirus disease (COVID-19) pandemic.

Earlier, Agap Banta and the University of the Philippines Resilience Institute – which is focused on climate risk mitigation – suggested that P1 billion be earmarked yearly over the next three years for building permanent evacuation centers in the country.

In a phone interview with INQUIRER.net, Kriszia Enriquez, Agap Banta spokesperson, pointed out that agencies dedicated to disaster mitigation should validate and monitor that the funds should solely be used for the construction of permanent evacuation centers.

“If there [are] guidelines and safeguards that can be issued by the NDRRMC [National Disaster Risk Reduction and Management Council] on this [building evacuation centers], I think it can be done in the sense that NDRRMC, together with its agencies, like DILG [Department of the Interior and Local Government] as vice-chairs for disaster preparedness, vice-chairs for response, that can be there to really check on it and then validate also. These are the safeguards,” Enriquez said in mixed Filipino and English when asked about how to curb anomalies in the construction of evacuation centers.

She added that non-government organizations (NGOs) may also help in monitoring the “retrofitting and repairs” of evacuation centers.

Aside from NGOs and national government agencies, local government units (LGUs) can play a role in ensuring that the construction of evacuation sites are completed on time.

“Also LGUs, if for instance projects by national agencies, LGUs are asked to sign the completion and certificate. Beneficiary LGUs will enforce monitoring and also national government agencies involved in disaster preparedness,” Enriquez said in mixed Filipino and English.

The establishment of evacuation centers will be manned by the Department of Public Works and Highways (DOWH), the agency recently hit with corruption allegations.

President Rodrigo Duterte already ordered the Department of Justice to create a task force to investigate irregularities in government agencies, especially the DPWH.

Citing data from the Climate Change Adaptation and Disaster Risk Reduction Cabinet Cluster, Agap Banta said 182 municipalities or 67 percent of 270 vulnerable provinces in the Philippines do not have permanent shelters for disaster victims.

Of the 270 municipalities, 96 LGUs belong to the fourth to sixth income class, which obtain an average annual income from P10 million to P5 million.

With this, Agap Banta bared that the government can earmark about P1 billion annually to invest in building evacuation sites to lessen casualties.

“Agap Banta estimates that an allocation of at least P1 billion annually for the next three years will cover approximately 120 permanent evacuation centers in highly vulnerable LGUs, which can accommodate about 13,500 families or 67,500 displaced individuals,” read the statement from the private organization and UP Resilience Institute.

While Congress is open to filing bills for creating permanent evacuation sites, Enriquez said the allocation of P1 billion per year can fast track the process of building the evacuation shelters.

“They [Congress] are open to it. We checked, there are legislations filed in both [chambers], establishing and creating this [National Evacuation Center Investment] program. But we said if the program can be instituted with the budget every year since legislation takes a while,” Enriquez said in mixed Filipino and English.

“It can be within agency programs right now like with agencies that are mandated to be involved in disaster preparedness [like] NDRRMC and DILG,” she went on.

Enriquez also highlighted that the P3 billion is solely for the construction of sturdy evacuation centers but not for other rehabilitation efforts for evacuees such as COVID-19 testing and psychological efforts.

Data from the Office of the Civil Defense showed that 28,083 evacuation sites were built nationwide. A huge chunk of evacuation centers was from Central Visayas with 2,994.

However, this figure did not specify if the evacuation centers are permanent or temporary.

Agap Banta also took issue with converting schools, barangay halls, gyms, multi-purpose halls, and churches as makeshift evacuation sites. They said these sites are not sturdy enough to protect evacuees from pandemics as well as disasters.

For instance, a report from the Office of the Vice President showed that several classrooms collapsed while evacuees were staying there during the wrath of Typhoon Rolly in several Luzon areas.

“These are not entirely fit to ensure the safety of evacuees, especially at this time when we have to enforce physical distancing and minimum health standards to curb the ongoing COVID-19 pandemic,” said Agap Banta.

Agap Banta also explained that investing in permanent evacuation centers can serve as temporary shelters for disaster victims while the construction of permanent housing is ongoing.

The private organization also underscored physical distancing in evacuation centers as it warned overcrowding in such sites will increase transmission of COVID-19.

In Marikina, one evacuee already tested positive for the novel coronavirus, the causative agent of COVID-19. Most of Marikina’s villages were submerged by the massive flooding of Typhoon Ulysses.

The Bayan Muna Partylist previously asked colleagues in the House of Representatives to prioritize the passage of a proposed law that pushes for the construction of safer evacuation centers amid the impacts of the recent typhoons that hit most Luzon areas.

President Rodrigo Duterte also earlier vowed that more evacuation centers will be built before he steps down from his post.