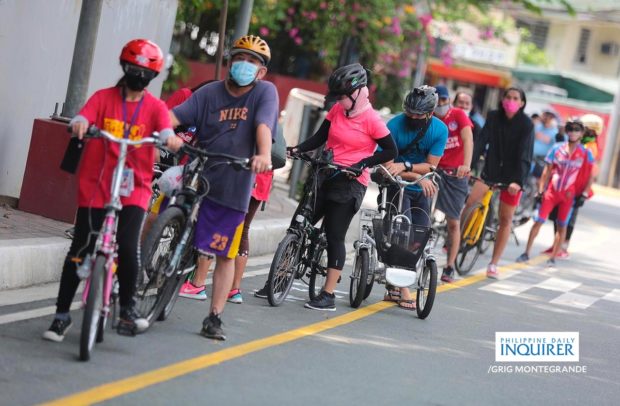 FILE – San Juan City Mayor Francis Zamora leads other bikers in using the new pop-up bike lanes in the city as part of the new normal on World Bike Day during its launching on June 3. The bike lanes were set up in cooperation with Edsa Evolution to protect frontliners and San Juan residents who have gone back to work using bicycles as means of transport. INQUIRER/GRIG C. MONTEGRANDE

MANILA, Philippines — President Rodrigo Duterte has declared the fourth Sunday of November of every year as “National Bicycle Day” in a bid to ensure ecological integrity and a clean and healthy environment.

Executive Secretary Salvador Medialdea signed Proclamation 1052 on Wednesday, Nov. 18 by the authority of the President.

The Department of Environment and Natural Resources (DENR) will be tasked to lead the National Bicycle Day observance and celebration in coordination with relevant non-government organizations and civil society groups.

All government agencies and instrumentalities and the private sector are enjoined to participate and render the necessary support to the DENR.

The bicycle was one of the modes of transportation approved by the Inter-Agency Task Force for the Management of Emerging Infectious Diseases as Metro Manila was placed under general community quarantine (GCQ).

The government encourages biking for transportation, noting that the two-wheeled vehicle is also cheaper as bikes do not need gasoline to run.