MANILA, Philippines — Presidential spokesperson Harry Roque on Thursday said tweets made by Vice President Leni Robredo and her daughters were behind the 20-minute rant of President Rodrigo Duterte against her in a public address.

Admitting he was not sure if Robredo indeed asked of Duterte’s whereabouts, Roque showed screenshots of tweets made by the Vice President’s daughters Tricia and Aika.

The said tweets, which asked if somebody was still asleep, did not contain any name nor the hashtag #NasaanAngPangulo (where is the President).

(It’s not helping. Although I don’t know if the Vice President asked where the President was, look at this. If not her, those who are close to her said it.)

(Here, look at this. First, the tweets of those close to her, I think they are her children. ‘Still asleep? It’s already 8 o’clock. That came from Tricia Robredo. I’m not sure about their relationship. Aika Robredo said, ‘It’s Saturday, the weekend.’ That’s the context.) 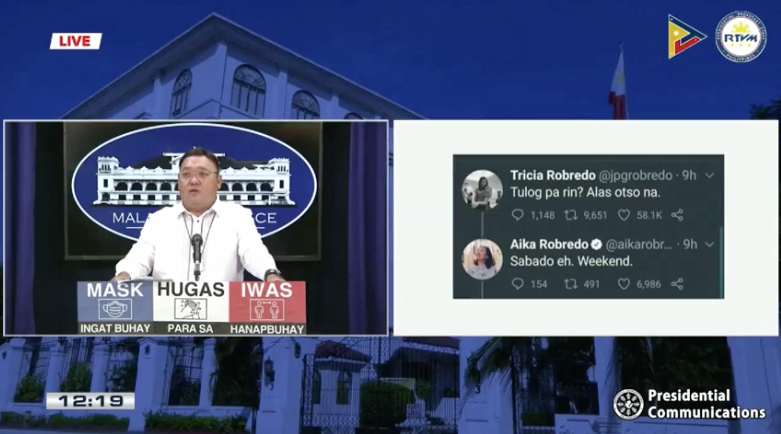 Duterte falsely claimed that Robredo asked for his whereabouts when Typhoon Ulysses hit the country. Robredo has also since denied the accusation.

Meanwhile, Roque said Duterte’s remarks were “justified” as he showed Robredo’s tweets on updates when several netizens asked for help following the massive flooding in Cagayan and Isabela due to Typhoon Ulysses. 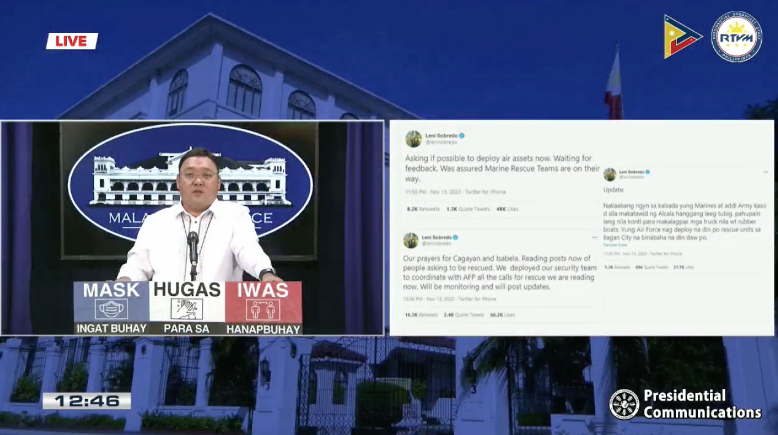 (The President was justified. Now, I won’t argue anymore. Here are the tweets of VP Leni. She said she was not making it appear that she was calling the shots during the typhoon. Here are her tweets.)

(These are the reasons why the President lost his patience.)

Robredo has made it clear that she did not order the military and police, but only sent out information of people asking to be rescued that her office was receiving.