Zubiri seeks clarification: So who’s really in charge during calamities? 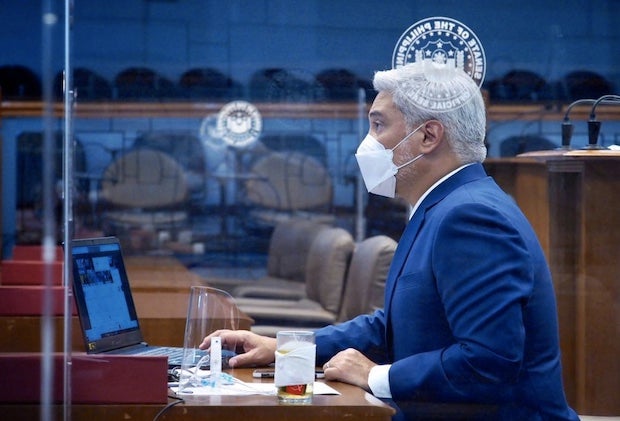 That’s the usual question that crops up during calamities, causing some confusion among local and even national agencies, as Senate Majority Leader Juan Miguel Zubiri pointed out during Wednesday’s plenary session focusing on the 2021 budget of the Department of Science and Technology (DOST) and its attached offices.

“Nagtuturuan po tayo [We’re pointing fingers],” Zubiri said, according to a statement issued by his office.

“We have no clue who is in charge. Don’t you think it’s about time that we have one agency that is supposed to take charge? Do all the planning, the preparation, the rehabilitation, and climate change mitigation efforts?”

Zubiri made these points as he took to the floor to raise concerns regarding the government’s disaster management agencies in the wake of the destructive Typhoons Rolly and Quinta.

He also noted a common experience he had when he traveled to the Bicol provinces of Catanduanes, Albay, Sorsogon, and Camarines Sur over the weekend to extend help to typhoon-struck communities and to talk to local officials about their concerns.

“I was always being asked the same thing, in Albay, in Catanduanes: Who’s in charge?” he said.

When he answered that it was the Office of Civil Defense (OCD), he got this reaction: The local officials don’t get to see the head of the OCD because he’s also the head of the National Disaster Risk Reduction and Management Council (NDRRMC).

They also pointed out that that the OCD head had the rank of undersecretary, which made it “awkward” for him to give orders to secretaries.

During Wednesday’s hearing, Zubiri brought up the issue of which agency should give the go-signal on the release of dam water during a storm.

He noted the claim of the National Irrigation Administration (NIA) that it would have to wait for the permission of the Philippine Atmospheric, Geophysical and Astronomical Services Administration (Pagasa).

But Pagasa officials denied this through Sen. Joel Villanueva, DOST budget sponsor, saying that the NIA remained in full control over dam discharge.

According to Zubiri’s statement, Pagasa officials explained that they did follow protocol by releasing a flood warning signal on Nov 8, during the onslaught of Typhoon Ulysses. But they said they had no authority to order the release of dam water.

According to Zubiri, the officials claimed that they did not get any warning from the proper agencies and were thus unable to prepare for the disaster.

But the Philippine Institute of Volcanology and Seismology (Phivolcs) claimed to have followed protocol by issuing bulletins to the proper offices ahead of time.

It was then the responsibility of local governments, they said, to pass on the information.

With all these concerns, Zubiri promised that Senate would conduct next week a hearing on the recent disasters and the management problems that came with them.