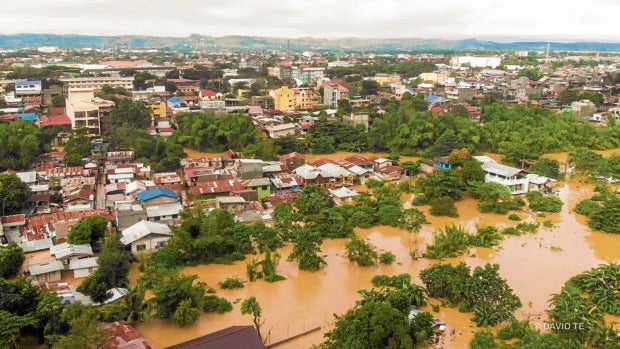 CITY UNDER WATER In this photo taken on Nov. 14, downtown Tuguegarao City, the provincial capital of Cagayan and regional center of Cagayan Valley, is flooded as the Cagayan River swells. —DAVID TE/Contributor

TUGUEGARAO CITY, Cagayan, Philippines — The severe flooding in Cagayan Valley has again drawn the attention of experts and government officials to the vulnerability of the region during calamities.

This city, the provincial capital of Cagayan, has been tagged by experts as one of the most vulnerable areas in the region during the rainy season for being flood-prone and a catch basin of water from tributaries.

The National Irrigation Administration (NIA) was also criticized for releasing water from the Magat Dam that was blamed for flash floods that claimed lives and displaced over 300,000 people in the region.

Situated in Ramon town, Isabela province, the dam opened seven of its floodgates on Nov. 12 that aggravated the flooding in the province and nearby areas.

“The gates of Magat Dam had to be opened since last week because of heavy rain to prevent the dam from breaking. In fact, we had been preventing a bigger catastrophe so we released water through seven gates,” said Carlo Ablan, chief of the NIA-Mariis flood forecasting and dam instrumentation division.

Once the reservoir breached the spilling level of 193 meters above sea level, it would result in more severe floods, Ablan said, adding that they had to “maintain a standard safety level and a normal inflow and outflow.”

On Nov. 12, the dam released water at a volume equivalent to 106.223 Olympic-size swimming pools, or two swimming pools per second.Mark Timbal, the Office of Civil Defense spokesperson, said the destructive flooding was mainly due to the swelling of Cagayan River in the last several weeks.

He said the floods were “cumulative effects” of the continuous rain experienced in Luzon and were not because of the release of water from the dam.

Mayor Cristina Antonio of Alcala town, also in Cagayan, said the recent flooding was reminiscent of a massive flood that her town encountered almost a year ago.

In December 2019, more than 5,000 houses in six villages in Alcala were submerged, affecting more than 10,000 families. “There was no typhoon signal, just rain due to monsoon and water coming from the Sierra Madre, water released by Magat Dam, water coming from everywhere,” she said.

Citing a study conducted by scientists led by Dr. Fernando Siringan, former director of the University of the Philippines Marine Science Institute and one of the country’s top river and marine geologists, Antonio said a “confluence of factors” brought the severe floods.

But she noted that environmental destruction had aggravated the situation. “Mountains, slopes and watersheds in the whole Cagayan Valley have been stripped of native trees that hold soil and regulate water release,” Antonio said in a Facebook post.

She added: “Trees are cut down and forests threatened not only by illegal logging but by farming in slopes and mountains, particularly yellow corn farming and the use of herbicide that kills all vegetation and weakens the soil.”

Antonio said they have built a secondary channel to cushion the impact of the current and planted a 30-meter-wide vegetation shield of native trees to “form a belt of protection for the riverbank and community.”

“It’s not just about Magat Dam protocols, although in our state of despair Magat Dam is the most visible target. It’s about us, it’s the way we live — as if we are apart from nature, as if what we do does not come back to us,” she said.