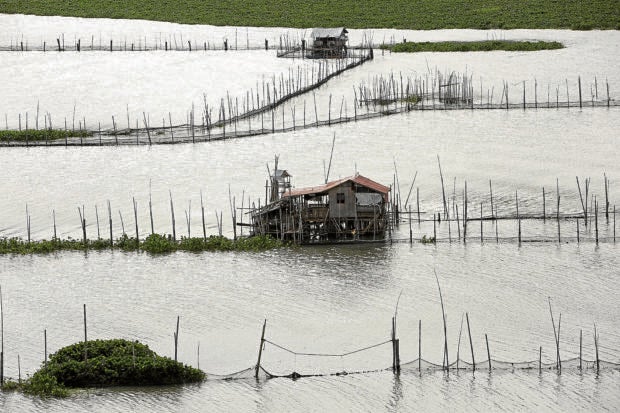 BIG INVESTMENT Running an aquaculture business in Laguna de Bay requires investors to spend heavily on bamboo poles and nets to build pens and cages, maintain fish stock, secure structures from poachers, and pay for government permits and taxes. Fishery structures in Laguna de Bay, like these in Cardona town, Rizal province, raise “bangus” (milkfish) that are sold in markets in Metro Manila and nearby areas. —LYN RILLON

The Laguna Lake Development Authority (LLDA) has released P23 million in fish pen fee share to storm-battered and flooded lakeshore towns and cities around Laguna de Bay. The amount is normally disbursed at the end of the year, but the agency recognized the immediate need for funds by local governments to recover from the aftermath of Typhoon “Ulysses” (international name: Vamco), said Emiterio Hernandez, manager of the LLDA Environmental Regulatory Department.

The share of local governments comes from 35 percent of the total annual users’ fee collected by the LLDA from fish pen operators. There are about 300 large fish pens and 2,000 smaller fish cages across the lake.Too much rain coupled with a heavily silted Laguna de Bay triggered shoreland flooding during Ulysses’ onslaught last week, forcing thousands of families in the provinces of Rizal and Laguna to evacuate.The 35-percent share of fish pen fees is broken down as follows: 25 percent is divided among 28 lakeshore municipalities and cities, 5 percent among 193 villages in the same localities, and the remaining 5 percent between the provincial governments of Rizal and Laguna.“Ideally, the fund is meant for their environmental protection programs [considering] they were a part of the Laguna lake [landscape]. But since it goes to their general fund, they can use it for priority programs like relief operations,” Hernandez said in a telephone interview on Tuesday.

The rest of this year’s collection goes to LLDA operations (60 percent) and for its project development (5 percent).

“This is [the] LLDA’s humble contribution out of the revenue generated from [the] lake fishery uses,” the agency said in a statement.

The fund release came despite big losses incurred by the fish pen operators themselves during Typhoons Ulysses and “Rolly” (Goni).

The LLDA estimated the cost of damaged structures, made out of anahaw leaves and bamboo poles, and lost fish stocks at P1 billion.

Many of the fish pens in Calamba City and the rest of Laguna were damaged during Rolly’s onslaught, allowing tons of cultured “bangus” (milkfish) to escape.