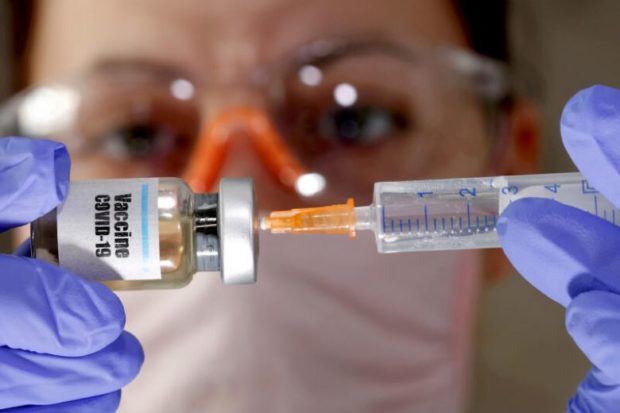 The world’s largest vaccine manufacturer warned that there will not be enough Covid-19 vaccines to go around until the end of 2024 at the earliest. REUTERS via The Straits Times/Asia News Network

SINGAPORE — Never before has humanity tried to produce something so quickly for every living person on Earth as now.

With a handful of Covid-19 vaccine candidates lifting hopes in recent days that a viable one may soon be found, global attention is turning to where the precious commodity can be manufactured, and if sufficient amounts can be churned out quickly enough for everyone.

Current leading vaccine candidates in the United States include one being developed by Pfizer and BioNTech, and another by Moderna. China’s experimental vaccines from Sinovac Biotech and Sinopharm as well as Russia’s Sputnik V are also thought to show promise. All of them require two doses per person.

Will there be enough vaccines?

Given a global population of 7.8 billion and with the World Health Organization putting the Covid-19 herd immunity threshold at around 70 percent, about 11 billion doses of vaccine would be required if any of these candidates prove effective.

The figure has yet to factor in wastage from potential challenges in producing, transporting, storing and handling them. Production of other vaccines will also need to continue while the coronavirus ones are being manufactured. The world’s vaccine factories have to rapidly ramp up capacity to cater for that.

The world’s largest vaccine manufacturer, the Serum Institute of India, has already warned that there will simply not be enough Covid-19 vaccines to go around until the end of 2024 at the earliest.

“It’s going to take four to five years until everyone gets the vaccine on this planet,” its chief executive Adar Poonawalla told the Financial Times in September as he warned that companies were not increasing capacity quickly enough.

The most recent estimate on global Covid-19 vaccine manufacturing capacity has British research firm Airfinity putting it at more than 16 billion by the end of 2021. Actual viable doses may fall by as much as two-thirds, though, after factoring in the probability of failure each step of the way, based on projections from European think-tank The Yellow House.

Furthermore, 9.5 billion doses of the Covid-19 vaccine have already been reserved by the world’s richer nations, according to an analysis last week by the Duke Global Health Innovation Centre’s Launch and Scale Speedometer initiative.

Canada alone has secured enough to vaccinate its population five times over, the report revealed. The US could also have access to over a billion doses from just Moderna and Pfizer-BioNTech next year, more than is needed for the country’s 330 million residents.

“It is sadly inevitable that demand for Covid-19 vaccines will vastly outstrip supply in the short term, leaving the majority of people unprotected,” said Dr Richard Hatchett, chief executive of CEPI, the vaccine development alliance also known as the Coalition for Epidemic Preparedness Innovations.

Where will the vaccines be made?

The coalition has set a goal to secure production of 2 billion doses of the coronavirus vaccine by the end of next year for distribution to those who need them most.

A CEPI survey of 113 vaccine manufacturers in May and June found that a third of them were based in the US while India and China together account for about a quarter of them.

Although the world’s top five vaccine makers by revenue are all from the US and Europe, it may be India and China, with their vast production capability and potential, that hold the key to creating enough of the coronavirus vaccine to supply the world.

India has long been rooted in the global supply chain, earning itself the moniker “the pharmacy of the world” with its high-quality, low-cost drug exports. It supplies some 60 per cent of the world’s vaccines.

Serum Institute’s Mr Poonawalla, who aims to raise the company’s Covid-19 vaccine-making capacity to 1 billion doses through 2021, has pledged that “50 per cent of whatever quantity we manufacture will be kept for India and the remaining will go to low- and middle-income countries”.

China, on the other hand, has until now mainly served its domestic market, with its fragmented industry of thousands of small vaccine manufacturers riddled with safety scandals over the past several years. Less than 5 per cent of Chinese-made vaccines are sold abroad.

But Beijing’s confirmation last month that it would join the Covax initiative to ensure equitable distribution of Covid-19 vaccines around the world can help integrate it into the global supply chain and gain gradual acceptance internationally as its manufacturers contribute vaccines prequalified by WHO to the rest of the world.

Covax, which aims to raise US$18 billion (S$24 billion) towards its cause, is co-led by the WHO, CEPI and Gavi, the Vaccine Alliance, and backed by more than 180 member countries including Britain, France, Germany, Japan and Singapore. The US under President Donald Trump is not part of the effort, calling it too constraining.

It’s hard to say exactly where the coronavirus vaccines will be made. Many countries are in the game, each with a vital role to play in piecing together the final products that can end the pandemic that has already cost more than a million lives.

Among them, Britain’s GlaxoSmithKline (GSK) and France’s Sanofi – respectively the world’s first and third-biggest vaccine makers by revenue – are together scaling up manufacturing of components of their vaccine candidate.

“One country cannot think of manufacturing a vaccine on its own,” a GSK spokesman said.

Even tiny Singapore, in its role as a global biomedical hub, has built up additional capacity to provide vaccine developers with contamination-free fillings of drugs into vials and syringes.

As countries come together as never before to create a vaccine to solve the world’s collective woe, everyone will do well to remember that there can be no faster, surer way to reach this shared objective, except through wholehearted cooperation and collaboration.