Peru left without president as Merino resigns after protest deaths 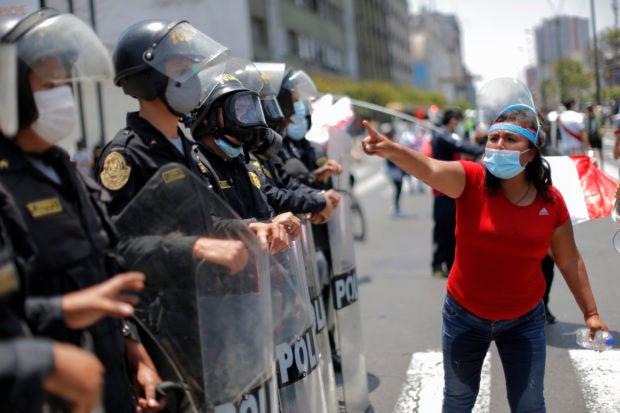 A woman gestures in front of police officers standing guard as people celebrate outside the Congress in Lima after Peruvian interim president Manuel Merino presented his resignation on November 15, 2020. – Peru’s President Manuel Merino resigned Sunday, just five days after taking office, sparking celebrations in the capital Lima following street protests against him and the ousting of his popular predecessor. (Photo by Luka GONZALES / AFP)

Lima, Peru — Peru was without a president Monday after Congress failed to agree on a successor to interim leader Manuel Merino, who resigned following days of street protests against him.

Merino announced he was stepping down Sunday, following an ultimatum from Congress for him to quit or face censure after a police crackdown on protesters left at least two dead and scores injured.

“I want to let the whole country know that I’m resigning,” said Merino, 59, in a televised address, sparking celebrations in the capital Lima following street protests against the ousting of his popular predecessor.

Congress now has to name Merino’s successor to become the country’s third president in a week.

Merino only assumed office on Tuesday, a day after the assembly impeached predecessor Martin Vizcarra on corruption charges. As speaker of Congress, he was next in line as the post of vice president was vacant.

A crisis session of Congress failed to agree on a new president Sunday night. Leftist legislator and former human rights activist Rocio Silva Santisteban, supposedly a consensus candidate, needed 60 votes but she only got 42, with 52 against and 25 abstentions.

“Congress had in its hands the solution to this political crisis that they generated. However, today they have turned their backs on the country,” former economy minister Vizcarra Maria Antonieta Alva tweeted.

Party whips then held a closed-door meeting as thousands of protesters remained peacefully on the streets, undisturbed by police.

Thousands have taken to the streets in days of protests against Merino, who had launched the first, unsuccessful, impeachment proceedings against Vizcarra in September.

Elections are scheduled for April 2021 and Merino was due to leave office in July when Vizcarra’s mandate was to end.

The Congress ultimatum came after the health ministry said two protesters were killed on Saturday during a massive march in Lima, which was repressed by police firing shotgun pellets and tear gas.

Merino said that to avoid a “power vacuum” the 18 ministers he swore in on Thursday would temporarily remain in their posts, though almost all had resigned in the wake of Saturday’s crackdown on protests.

His resignation was greeted by noisy celebrations in Lima, with demonstrators sounding horns and banging pots.

“We succeeded. Do you realize what we are capable of doing?” Peru national soccer team midfielder Renato Tapia wrote on social media.

Some lawmakers questioned the wisdom of removing Vizcarra in the midst of the coronavirus pandemic and a crippling recession.

The pandemic has hit Peru hard, with the politically fragile country having the world’s highest per capita death rate — with nearly 35,000 fatalities — and GDP plunging over 30 percent in the second quarter.

Vizcarra, 57, welcomed his rival’s resignation, having questioned the legality of his dismissal last week.

“A dictatorship has left the palace,” he told reporters outside his home in Lima, adding that Merino “was breaking our democracy.”

The popular former president did not rule out a return to his mandate and urged an early ruling on a constitutional challenge to his November 9 dismissal.

“It is essential that the Constitutional Court makes a statement urgently and say whether what the congressmen did on the 9th is legal,” said Vizcarra.

Thousands of mostly young protesters took to the streets Saturday to oppose what they called a parliamentary coup against Vizcarra.

A crackdown by police left at least two dead and 94 injured, according to health ministry officials. But the National Human Rights Coordinator said 112 were injured and warned that a dozen had also “disappeared” during the protests.

The violent repression of the protests eroded whatever political support Merino had and the head of Congress called for his immediate resignation.

The police tactics have been criticized by the UN and rights organizations such as Amnesty International since the protests began on Tuesday.

The Inter-American Commission on Human Rights regretted the deaths of the two protesters and demanded “an immediate investigation of the facts and to establish responsibility.”

Vizcarra had broad support since succeeding Pedro Pablo Kuczynski, the former Wall Street banker who was forced to resign under threat of impeachment over corruption allegations in 2018.

Congress impeached and dismissed Vizcarra on Monday over allegations he took kickbacks from developers when he was governor of the Moquegua region in 2014, charges he denies.