TUGUEGARAO CITY, Cagayan, Philippines — Civil defense and local disaster officials on Saturday scrambled rescue teams to save thousands of people trapped in their homes, many on rooftops, appealing for help to escape rising waters as the worst flooding in four decades swept through northern Isabela and Cagayan provinces.

The two provinces were spared from a direct hit by the recent parade of storms, but experienced heavy rains dumped by Typhoon Rolly (international name: Goni) and by an enhanced monsoon early this month.

On Thursday, they felt the effects of the torrential rain from Typhoon Ulysses (international name: Vamco), which had submerged large areas of Metro Manila and Rizal province.

Cagayan Gov. Manuel Mamba said local governments were “blindsided” by the fury of Ulysses, the massive flood and the damage it caused.

Mamba said the provincial government had prepared for the flood, warning residents and enforcing preemptive evacuations. 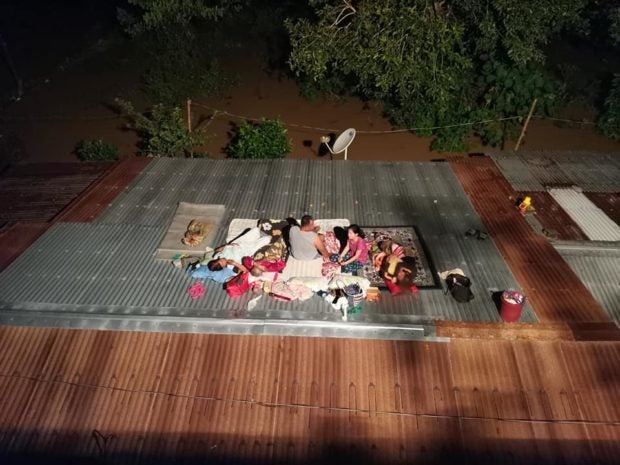 ‘WORST FLOOD IN 40 YEARS’ A family of five is forced to wait it out on their rooftop at Barangay Iraga, Solana town in Cagayan province as floodwaters rise on Friday night. —CAGAYAN PUBLIC INFORMATION OFFICE PHOTO

But the volume and level of the floodwater were just so “enormous” even though no storm signal was raised over Cagayan and nearby provinces as Ulysses crossed Luzon, he said.

Water discharged by Magat Dam in Isabela also contributed to the disaster that was the “worst in memory” since 1981, according to the governor.

Village officials had gone around neighborhoods warning residents to prepare for evacuation as the gates of Magat Dam were opened.

The floodwater rose fast, according to Estelle Bueno, 28, a resident of Barangay Ugac Norte in Tuguegarao City, Cagayan’s capital. Some streets were already flooded as early as 6 a.m. on Thursday and the water was knee-deep four hours later, she said.

Bueno’s family evacuated to a nearby hotel. Her 50-year-old mother-in-law said this was the first time that their village was heavily flooded.

In Barangay Linao, also in Tuguegarao, houses were still underwater on Saturday.

Officials reported many families had been trapped on the roofs of their houses in 156 flooded villages in Tuguegarao as well as 24 other towns in the province since Friday. Many of those trapped had no food and water.

“We are literally in a sea of floodwater—the biggest for the past 40 years,” said Rogelio Sending Jr., Cagayan provincial information officer.

Most people in the national capital and the rest of the country learned about the massive flood that engulfed Cagayan Valley only on Friday night and Saturday morning when social media began to be swamped with posts reporting and showing pictures and videos of people huddled on rooftops. 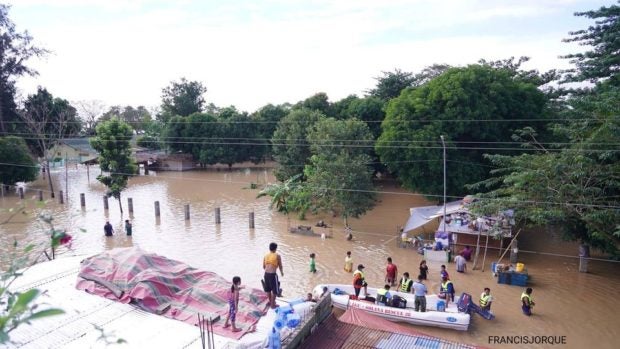 RELIEF Police come to the aid of residents at Barangay Iraga in the municipality of Solana, west of the Cagayan River. —CAGAYAN PUBLIC INFORMATION OFFICE PHOTO

One particular video stood out for showing a pitch-black screen, with no images of people, only frantic calls of “Help!” and “Rescue! Rescue!” in the background.

Scores of netizens launched appeals for the government and the mainstream media to shift focus to Cagayan Valley. The hashtag #CagayanNeedsHelp trended on Twitter and Facebook.

Francis Jorque, a photographer of the Cagayan provincial information office, said people who still had access to the internet turned to social media to call for help.

Fifty of 91 villages in the City of Ilagan and all villages in Santo Tomas town were underwater.

“Villagers were caught by surprise. They did not expect that this was more damaging and wider in scale than the previous typhoons,” said Albano, who flew over the province on a helicopter to survey the extent of the flooding.

After floodwaters swept through most of their towns and villages, Isabela and Cagayan declared a state of calamity on Friday.

Rescue efforts were slowed down by intermittent rain and by live electrical lines, which killed a volunteer rescuer, officials said.

Henry Kelly Villarao, a diver with the Bureau of Fisheries and Aquatic Resources, and his team braved the rising floods in Aparri town and traveled for three hours to conduct “critical rescue” operations in Tuguegarao on Friday.

On their final rescue sortie, their speedboat snagged a live wire, killing the father of a 4-month-old boy.

“We are doing the best we can to rescue stranded people but we have been hampered by strong water current,” said Michael Conag, information officer of the Office of Civil Defense in Cagayan.

Soldiers were sent to Cagayan Valley on Saturday morning to augment relief and rescue operations.

Marines from the Marine Battalion Landing Team 10, and the 77th and 17th Infantry Battalions started rescuing trapped villagers on Saturday.

About 400 policemen were also mobilized for the rescue effort in Isabela. 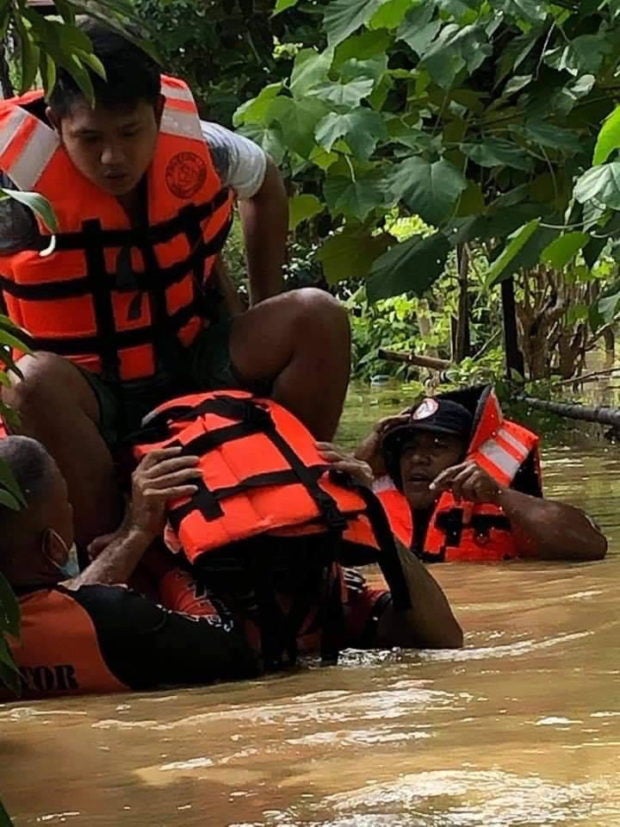 REINFORCEMENTS Members of the Coast Guard wade in floodwaters as they join rescue efforts in Cagayan. —PHILIPPINE COAST GUARD PHOTO

Vice President Leni Robredo on Friday night said her office was “taking note of all calls for help and forwarding them to rescue teams on the ground.”

Robredo, in a series of tweets on Friday night to early Saturday, said she coordinated with the Armed Forces of the Philippines and the Philippine National Police for possible rescue operations.

According to Robredo, rescue teams faced strong flood currents. Some roads in Alcala town, Cagayan, were impassable due to either flooding or storm debris, which hindered one Army platoon from passing through, she said.

“While waiting for augmentation to reach Tuguegarao, our team was able to get in touch with [the local police]. We forwarded all the compiled requests and calls for help. Limited assets now but [medical evacuation] will be prioritized,” Robredo said in a tweet.

Rescue teams said that they were having difficulty conducting operations due to the number of people who had to be evacuated, according to the vice president.

PCG helicopters were also deployed for aerial extraction of the stranded residents, while a PCG islander plane was already in the area.

The Northern Luzon Command of the AFP also shifted its efforts from counterinsurgency to search, rescue, retrieval and relief operations.

The AFP has sent rubber boats and helicopters in the region, which still has impassable roads.

More rescue personnel are on standby at the Villamor Air Base.

The Department of Social Welfare and Development and Department of Health also provided relief assistance to the affected residents in the region.

Rescue work was hampered by the floodwaters that made multiple road sections in Cagayan impassable.

The Department of Public Works and Highways on Saturday said many roads in the province were closed to traffic due to the “extremely high” water level of the Cagayan River, which inundated many towns in Cagayan and Isabela.

Other major roads in various areas in Luzon also remain impassable or with only limited access due to the landslides, fallen trees and other debris, and flooding.

In the City of Ilagan, Isabela, the flood already receded around 7 p.m. on Saturday but some low-lying villages in the province remained submerged under 5-meter high  floodwater.
Twenty towns in Cagayan remained submerged as of Saturday night, according to Task Force Cagayan.
As of 5 p.m. on Saturday, the level of water at the Buntun  Bridge, which stretches from Tuguegarao City to Solana in Cagayan, had receded by only a meter from 13.3 meters recorded on Friday evening.  —With reports from Toneette Orejas, Yolanda Sotello, Kimberli Quitasol, Leila B. Salaverria, Nikka G. Valenzuela and Jovic Yee