MANILA, Philippines — Until a barrage of online cries for help from Cagayan Valley peaked late Friday night, the nation’s attention was focused on other parts of Luzon that were directly hit by Typhoon Ulysses, (international name: Vamco) mainly Marikina City in Metro Manila, Rizal province, and the Bicol region.

The following morning, the bigger picture of devastation finally emerged.

Local officials in Cagayan province on Saturday sent out distress calls as Tuguegarao City and 24 of its 29 towns were submerged in floodwaters, two days after Typhoon Ulysses’ exit from the country, trapping thousands of residents on the rooftops and upper floors of their homes.

President Rodrigo Duterte later that day assured the distressed residents of prompt government assistance, saying he had formed a task force for that purpose.

“I want the task force to give relief assistance immediately to the affected people,” he said.

Residents in the province took to social media to air their urgent appeal for help, as they said they were caught by surprise by the rise of floodwaters overnight on Friday.

Cagayan Gov. Manuel Mamba said many villages became isolated, as access roads were rendered impassable due to the swelling Cagayan River and its tributaries. 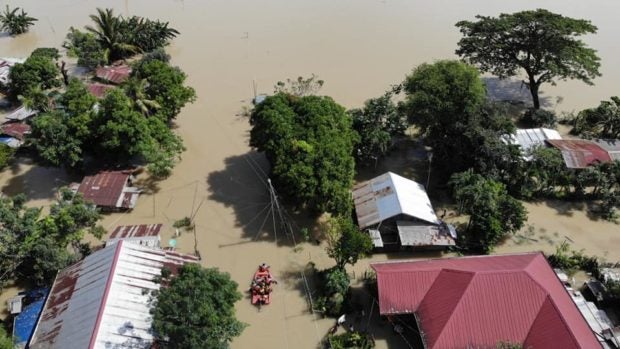 SEARCH A rescue team reaches Zone 3 at Barangay Malinta in the municipality of Lasam, northwest of Cagayan, as it looks out for residents who may be in danger amid the high floodwaters. —LASAM MUNICIPAL DISASTER RISK REDUCTION MANAGEMENT OFFICE PHOTO

Among the worst hit in the province is its capital, Tuguegarao City, which straddles the river, with floodwaters submerging 40 of its 49 villages, according to Mayor Jefferson Soriano.

“Our problem was that many of the residents did not want to leave their houses when we issued flood warnings, complacent that the flood would not reach this level,” he said.

Soriano said the city government was getting ready to evacuate residents of the riverside villages in the city, even as the water level at the Buntun Bridge monitoring station west of the capital began to subside on Saturday.

Floodwaters of the Cagayan River reached a record 13.3 meters at the Buntun station, but receded to 12.9 m on Saturday.

A report on Saturday by the Provincial Disaster Risk Reduction and Management Council (PDRRMC) of Cagayan also noted a “slow rise” of the water level in other rivers in the province, including the Pinacanauan de Tuguegarao, Chico, Pared and Dummun.

In the village of Bitag Grande in Baggao town, about 35 kilometers east of Alcala, four people were killed by a landslide.

In Lal-lo town, further north of the province, 21 of 35 villages were flooded, said Mayor Oliver Pascual.

He also reported that San Antonio village, a 238-household island community in the middle of the Cagayan River, remained isolated while its homes were submerged in floodwaters.

Pascual said teams led by other local governments as well as various agencies including the Armed Forces have spread out to rescue residents still trapped in their homes.

“We will also need assistance to assess the damage on infrastructure, livelihood. We will need the intervention of the national government to be able to get through this calamity complicated by [the coronavirus pandemic],” Pascual said.

In Malacañang, Mr. Duterte said members of the Philippine Army, the Philippine Navy and the Coast Guard were deployed to Region 2, adding that he would send more helicopters to help.

“The government will come promptly using all its assets and resources. I will see to it that they will arrive,” he said.

Mr. Duterte said the task force he has formed would ensure no delays in rescue and relief efforts. It was not clear, however, who would head the new body and how it would be different from other government agencies involved in disaster relief efforts.

He asked stranded residents to wait for rescue.

“Those who have not yet been rescued from their homes, maybe this is still early, 1 p.m., but our air assets will arrive,” Duterte said.

There were urgent calls all over social media to rescue trapped residents as waters rose in the streets of the capital and other areas.

“We braved the floods in the past four years; we cannot take it anymore. World, we need your help,” she said.

Netizens, including not a few officials, echoed this appeal.

Party-list Rep. Enrico Pineda of 1-Pacman said it was “devastating and disheartening” to see “many posts on social media with photos of ceiling-level flooded towns [and] people seeking rescue.”

“How did this happen? What preparations have we done, from the national to the local level?” he said.

In the course of this calamity, local officials elsewhere also called for assistance for Cagayan.

—With reports from Leila B. Salaverria, Mar S. Arguelles and Julie M. Aurelio