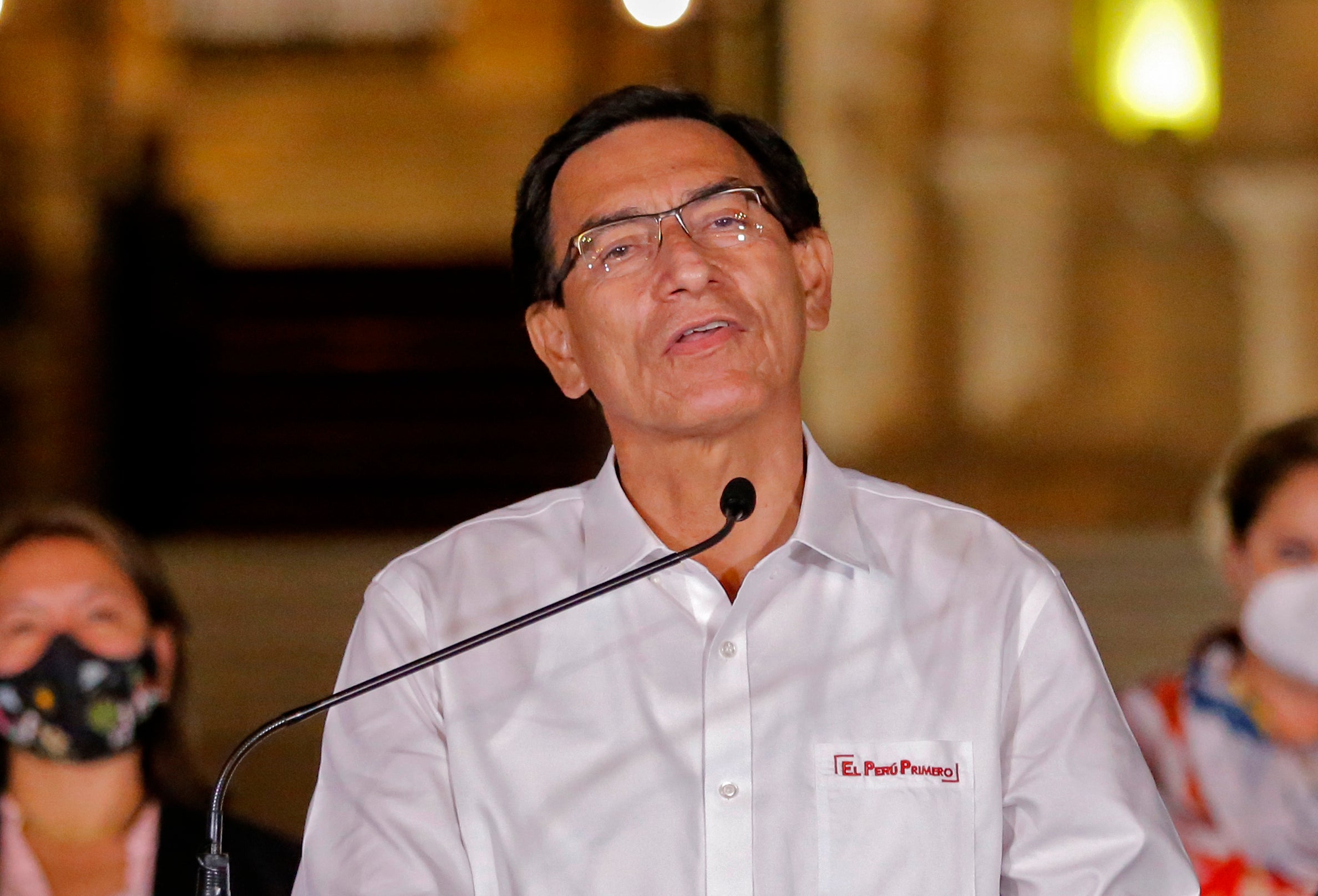 (FILES) In this file photo taken on November 09, 2020 the then Peruvian President Martin Vizcarra gives a farewell statement to the press before leaving the presidential Palace in Lima, following his impeachment by an overwhelming majority Congress vote. – Peruvian justice on November 13, 2020, banned former President Martín Vizcarra from leaving the country for 18 months over allegations that he had received bribes to authorize public works contracts in 2014, when he was governor of the southern region of Moquegua. (Photo by Luka GONZALES / AFP)

LIMA, Peru — A Peruvian judge on Friday banned ousted president Martin Vizcarra from leaving the country days after his dismissal by Congress as the nation’s political crisis spilled over into street clashes between protesters and police.

The announcement came after thousands of people took to the streets in the capital Lima and cities across Peru late Thursday to protest Vizcarra’s impeachment over corruption allegations.

At least 14 protesters were wounded in clashes with police, the National Human Rights Coordinator said.

Judge Maria Alvarez said she was imposing an 18-month travel ban on Vizcarra at the request of the Public Prosecutor’s Office, investigating allegations that the 57-year-old received more than $600,000 in kickbacks from developers while a regional governor.

“We have said that we will stay,” Vizcarra assured journalists Friday, once again rejecting the charges against him and questioning the legality of his removal.

“We have the truth and the support that backs us up,” he said.

Tense protests that began Tuesday continued into Friday, when hundreds of young people marched to the residence of Prime Minister Antero Flores-Araoz in Lima, after the 78-year-old conservative challenged them to come to his house because he did not understand their demands.

With signs saying “Merino is not my president” and “Rats out of Congress!” they marched dozens of blocks to the house, where they were stopped by a police barricade.

In the capital Lima late Thursday, police used tear gas and pellets to disperse a group trying to reach the Congress building while protesters threw sticks and stones at the officers.

Those wounded in the clashes included two young men hit “by firearms,” said Jorge Amoros, a doctor at Almenara hospital in Lima where both are hospitalized.

An AFP photographer was struck by pellets in his arm and leg during the march in Plaza San Martin.

The South America office of the UN High Commissioner for Human Rights called on authorities to guarantee the right of Peruvians to protest, saying it had received “disturbing information” about police behavior.

The Ombudsman’s Office demanded security forces “immediately cease the use of tear gas and pellets against citizens who exercise their right to demonstrate.”

Vizcarra said protests must be allowed and called on the people to express themselves peacefully.

“We also appeal to the national police to respect the demonstrators,” he said.

“We are not going to put in place a brutal change,” he said, after installing his government with a conservative majority.

When he took office on Tuesday, Merino said he would respect the calendar for the next general elections, scheduled for April 11, 2021, and would leave power on July 28, 2021, the day when Vizcarra’s mandate was to end.

Clashes also took place on Tuesday, after Merino was sworn in.

Vizcarra had broad popular support since succeeding Pedro Pablo Kuczynski, the former Wall Street banker who was forced to resign under threat of impeachment over corruption allegations in 2018.

Some lawmakers had questioned the wisdom of removing Vizcarra in the midst of the coronavirus pandemic and a crippling recession, with the financial markets nervous about whether the new government will maintain existing economic policies.

“In all the cities of Peru, people are rising up because they consider that this has been a coup,” protester Luis Bardales, 34, told AFP in Lima.

“We do not agree with parliament. It was not necessary” to dismiss Vizcarra, said protester Irene Aguilar, marching with her daughter.

The coronavirus pandemic has hit Peru hard, with GDP plunging more than 30 percent in the second quarter.

The South American country has the world’s highest per capita death rate from the virus, which has caused nearly 35,000 deaths and more than 930,000 infections.