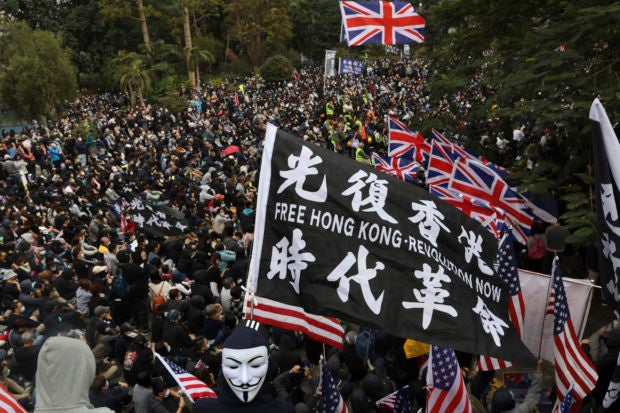 In this January 19, 2020, file photo, participants wave British and U.S. flags during a rally demanding electoral democracy and call for a boycott of the Chinese Communist Party and all businesses seen to support it in Hong Kong. Only five years ago, former British Prime Minister David Cameron was celebrating a “golden era” in U.K.-China relations, bonding with President Xi Jinping over a pint of beer at the pub and signing off trade deals worth billions. Those friendly scenes now seem like a distant memory, with hostile rhetoric ratcheting up over Beijing’s new national security law in Hong Kong. China has threatened “consequences” after Britain offered refuge to millions in the former colony. (AP Photo/Ng Han Guan, file)

“China has once again broken its promises and undermined Hong Kong’s high degree of autonomy,” he said in a statement.

Britain is the former colonial power in Hong Kong and has increasingly locked horns with China since Beijing imposed a sweeping national security law last year.

Fifteen legislators quit in protest at the ouster of their colleagues, confirming fears among critics that democracy is being eradicated in Hong Kong.

It has also suspended its extradition treaty with Hong Kong, one of a number of countries to do so.

The treaty was signed before Britain handed back Hong Kong to China in 1997 and was designed to allay fears about its future under Beijing’s rule.

It guarantees the financial hub special status, including a high degree of autonomy to manage its own affairs and the right to freedom of speech.

Adams told lawmakers the latest move was part of a “pattern of measures to pressure and stifle all voices critical of China’s policies.”