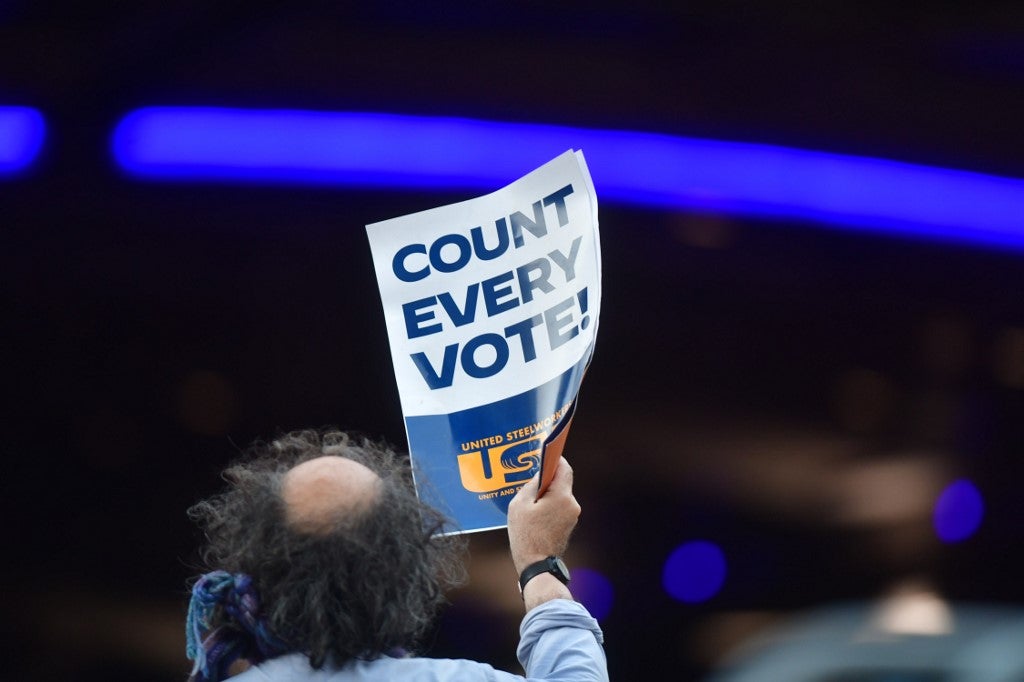 A man holds a placard that reads “Count Every Note” while demonstrating across the street from supporters of President Donald Trump outside of where votes are still being counted, six days after the general election on November 9, 2020 in Philadelphia, Pennsylvania. The state was called for President-elect Joe Biden on Saturday, propelling him past the requisite 270 electoral votes to win the presidency. With 98% of the ballots reported, President-elect Biden leads President Trump by 45,595 votes. Mark Makela/Getty Images/AFP

Barr, long a close defender of Trump, stressed that his letter to US attorneys around the country was not an indication that the Justice Department had evidence yet of genuine cases of fraud in the election won by Democratic challenger Joe Biden.

But he unleashed the prosecutors from former restrictions on such probes, just as Republicans levelled claims of illegal voting and vote counting in several states, claims that still await solid evidence.

“Given that voting in our current elections has now concluded, I authorize you to pursue substantial allegations of voting and vote tabulation irregularities prior to the certification of elections in your jurisdictions in certain cases,” Barr said in the letter.

“Such inquiries and reviews may be conducted if there are clear and apparently-credible allegations of irregularities that, if true, could potentially impact the outcome of a federal election in an individual state.”

Voting fraud investigations are normally the purview of individual states, which establish and police their own election rules.

Justice Department policy has been to hold back any federal involvement until vote tallies are certified, recounts completed and races concluded.

But Barr told the attorneys that “practice has never been a hard and fast rule,” and stressed that, if they see anything that could reverse the results of last Tuesday’s election, they should pursue it.

“While serious allegations should be handled with great care, specious, speculative, fanciful or far-fetched claims should not be a basis for initiating federal inquiries,” he wrote.

US media reported that the head of the Justice Department’s Election Crimes Branch, which oversees investigations into voter fraud, resigned following Barr’s order.

The branch director, Richard Pilger, reportedly handed in his resignation within hours of Barr’s authorization.

In an email to colleagues about Barr’s order, Pilger said, “Having familiarized myself with the new policy and its ramifications… I must regretfully resign from my role,” The New York Times reported.

The Trump campaign and the Republican party have filed or threatened lawsuits in several of the states, hoping to change the outcome with ballot disqualifications and recounts.

But so far, their actions have gone nowhere, and state officials have challenged them to provide proof of allegations.

Trump had reportedly pressured Barr to get involved on his behalf even weeks before the election.

But the attorney general had disappeared from public view for several weeks, until Monday when he was seen meeting with Senate Majority Leader Mitch McConnell.