Bongbong Marcos: No prior talks with OSG on plea to inhibit Leonen 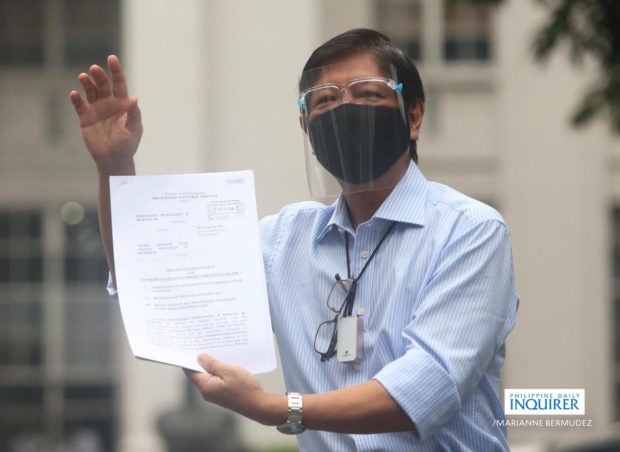 MANILA, Philippines — Former Senator Bongbong Marcos made it clear Tuesday that his camp did not have prior communication to the Office of the Solicitor General (OSG) over their separate motions seeking for the inhibition of the Supreme Court justice handling his poll protest against Vice President Leni Robredo.

Marcos said this as Robredo’s camp suspected collusion between the two, citing similarities in the former senator and Solicitor-General Jose Calida’s motions.

“We have not been in any kind of communication with the SolGen’s office. I’m sure that the SolGen is perfectly capable of acquiring a copy. I’m sure he was able to read our motion before he filed his own motion,” Marcos said in an interview over CNN Philippines.

“I suppose because we filed our motion early in the day at 9 o’clock yesterday, he clearly already had an intention to file previous to that and maybe he adopted some of the elements that were in our motion. We will have to ask the SolGen about this,” he went on.

In the same interview, one of Robredo’s lawyers Emil Marañon questioned OSG’s move to back Marcos’ motion, describing it as an “abnormal circumstance.”

“We will file the necessary pleading po to raise our objections regarding number one, the participation of the Solicitor General. Second po, the actual merit of what the Solicitor General has filed. But sa amin po, this is a very abnormal circumstance. It should be questioned,” Marañon said.

Marañon raised questions about the similarity of Solicitor-General Jose Calida’s motion with that of Marcos’ and whether there was a “collusion” between the two prior to filing.

“We have read and checked the documents that both camps have filed and you can see similarities in argument, exactly the same and similarly worded po yung mga sentences,” Marañon said.

(Our point is, the apparent collusion, as admitted by Mr. Marcos earlier, is very apparent to the action of the Solicitor-General. Because he’s coming in as the tribune of the people supposedly, but our question is, why is he leaning toward the one rejected by the nation?)